In the Lead-Up to Trinidad and Tobago's Bocas Lit Fest, a Valediction for a Writer We Should Have Known Better 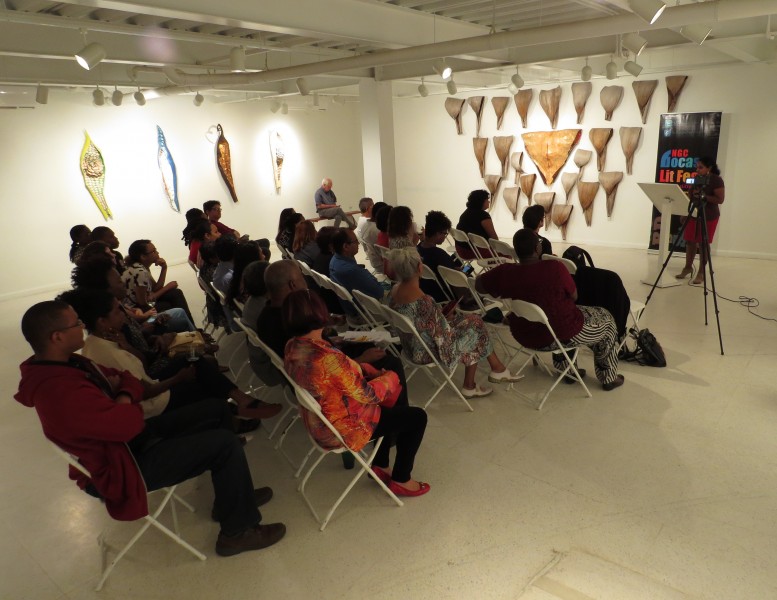 When I saw Salman Rushdie’s name on this year’s Virgin Islands Literary Festival and Book Fair programme, I said a prayer for the festival organisers. Landing a star guest is every festival's dream, of course: a big name raises the event's profile and brings in the non-specialist audiences. But luminaries also suck up oxygen and the attention and energy of organisers and media, and cast their long shadows over other worthy festival invitees. For a fledgling festival on an island of 50,000, a figure like Rushdie, who—thanks to a fatwa issued by Ayatollah Khomeini, an ex-wife who'd go on to host “Iron Chef”, and his own mediagenic personality—has managed to attain an unusual level of celebrity, was always going to be a bit much.

Then comes the news, two days before the festival opening on April 22, that Rushdie had cancelled. Particularly unfortunate news in light of the fact that the VI Lit Fest isn't free, or inexpensive; those who were coming to the festival especially for Rushdie's keynote must be bitterly disappointed. Even sadder, arguably, is the fact that this would hardly be the eminent writer's most famous no-show, as what could top his exit from the 2012 Jaipur Literary Festival, after learning he'd possibly been targeted by killers commissioned by an underworld don?

On the evening of the day Rushdie's VI Lit Fest cancellation was announced, about 30 people gathered in the white-walled basement of the Medulla Art Gallery, 500 miles south-east of St. Croix in Port of Spain, Trinidad, to pay tribute to a writer who, in every respect except ethnicity, is Rushdie’s opposite.

The event had been quickly pulled together by writers Nicholas Laughlin (who's also program director of the Bocas Lit Fest) and Anu Lakhan, and shoehorned into the pre-festival program for Bocas, whose sixth edition starts on April 23. (And this is probably an opportune time for me announce to disclose my Bocas Litfest bias—I am a friend and fan of both the festival and its organisers).

For the people in the room that evening, perhaps the most important way in which the writer in question is the anti-Rushdie, is that the latter is still alive. Irma Rambaran died at the end of February 2016—quietly, as was her way, at the age of late fiftysomething. She was a writer and journalist, according to the promo for the event, ‘whose literary work was little published but much admired by those lucky to be her readers.’ 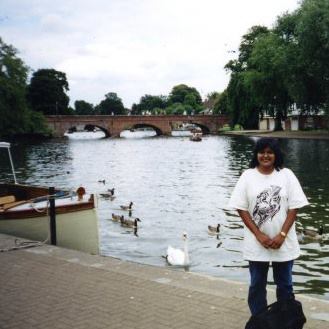 Trindadian writer Irma Rambaran in her younger days. Photo from her Facebook page.

I'd met Irma a few times, but wasn't part of the small circle who knew her writing well. Three of the people who would read from her work that evening knew it intimately. Nicholas and Anu and fellow writer and poet Lisa Allen-Agostini had met Irma on the St. Augustine campus University of the West Indies (UWI) twenty-odd years ago. In spite of being several years their senior ‘she had a lot of time for people like us,’ Nicholas said in his opening remarks. ‘I think the reason we didn't grasp how much older she was is that she treated us like ordinary, thinking people.’

Irma was also one of the writers Nicholas published in Prometheus, a tiny literary magazine he started while he was at UWI. Irma handed him a sheaf of papers one day with several brief pieces, sometimes comprising just a paragraph or two, or a few sentences, that may or may not have been fiction. She referred to them as vignettes: in today’s literary parlance they’d be called “short short” or “flash” fiction. He remembers reading them and thinking, ‘Wow—she really knows what she's doing.’

Over the years Irma published a fair amount of her creative writing in Trinidadian magazines and newspapers, including The New Voices, Caribbean Beat, Anansesem, Newsday, and the Trinidad & Tobago Review, though self-promotion was not one of her talents. She worked at various media outlets in Trinidad, including the government television unit. From an essay by academic Kris Rampersad paying tribute to Irma, I learn that in the 1990's she was a scriptwriter on the television series “Book Talk” and “Cross Country“, a locally-produced travel show showcasing Trinidad and Tobago's little-known corners that, according to Rampersad, was once the most popular show on television.

Anu Lakhan hinted that Irma may have been schooled in the vignette form by writer and creative writing teacher Wayne Brown, who believed strongly that learning to write these snapshots in words, to tell a story plainly, succinctly and vividly using only material that was immediately available to the senses, was a critical discipline for a budding writer. For most Brown students this was probably a useful and interesting exercise, but not an idiom they cared to perfect. Judging from the evening’s first three or four readings it was one where Irma was completely at home. 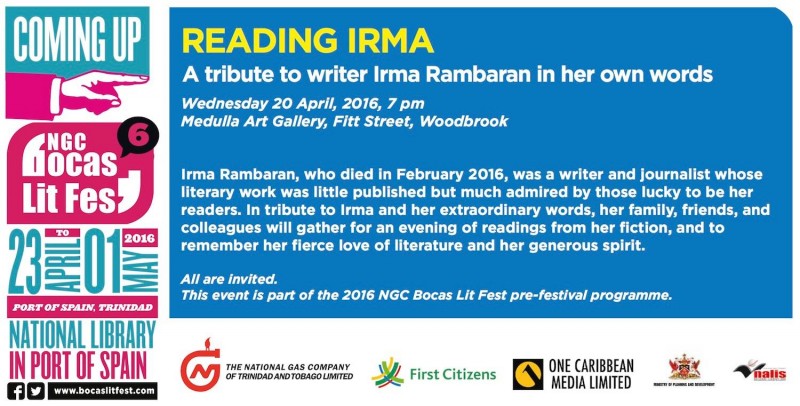 “Friday Morning” and “Lunchtime”, two spare, crisp pieces that clock in at just over 150 and 130 words, respectively, are almost transgressive in their economy. Describing moments and small gestures that appear mundane, on the face of it, Irma manages to convey a world of feeling. In “Restless”—93 words—she demonstrates a flair for dialogue and some sharp comic timing. “Eyes and Smiles” telegraphs the sensuality that permeates Trinidad’s carnival in just 240.

Kris Rampersad writes of Irma's talent for ‘draw[ing] some satirical analogy from some great work of literature, or some anecdotal experience, idea or humorous incident. . . which would allow us to refocus and pour our creative energies on the task at hand to shape . . . rather than waste it in a lament.’ Two of pieces on the program do have the ring of narratives inspired by current events, but not so much ripped as lifted carefully from the headlines and re-imagined with those from the periphery in the center as protagonists.

“A Simple Man”, perhaps the most affecting piece read that evening, imagines the events surrounding the mistaken airdrop of a bale of cocaine in a fishing village, and shows Irma’s solid command of the longer story, and a genuine feel for plot and the ordering of details and exposition in order to build towards a powerful revelation. “Circular, Drive”, is a hilarious, pitch-perfect retelling of last year’s dramatic jailbreak in Port of Spain from the point of view of the taxi driver who ended up transporting one of the escapees.

Irma wasn’t uncomplicated (what good writer is?): Rhoma Spencer in the prologue to her reading of “Rum Shop” hinted at a drinking problem, as did Kris Rampersad in her essay. But shining through all of the stories read that evening was a deep humanity. “Even though the plots she inserts them in might be difficult or cruel,” Nicholas Laughlin said in his introductory remarks, “you never thought she felt cruelly towards her characters. There are writers now whom you think, that’s kind of sadistic what you're putting these people through. But you could never say that about Irma.” Her characters appear guided by a moral compass whose needle may float a bit, but which skews generally in the direction of decency, and the picture she paints of Trinidad is unusually gentle. In “Rum Shop”, for instance, a bar owner who cheats a customer turns out to have a compassionate ulterior motive. Even “Circular, Drive”’s prison escapee has a few redeeming qualities.

At the end of an hour of listening to Irma’s work, which lends itself particularly well to being read aloud, the group of us hanging out in the Medulla Gallery basement drinking wine, quoting lines that had struck a chord, agreeing that Irma, with her skill at painting pictures in words and conjuring atmosphere, would have made a helluva screenwriter, wanted to believe that there was a cache of notebooks just awaiting discovery, a hard drive somewhere, that contained more of Irma’s work.

At festivals and conferences the marquee events can be excellent, but as people often say, it's the surprises, the serendipitous encounters that take place in the corridors and interstices, that often turn out to have the most value. I’ll add to that list the sessions where you discover that a writer whose work you didn’t know before is in fact brilliant. Had Irma Rambaran not died last February, the lucky handful in that white room on April 20 would probably not have had the chance to experience as a body of sorts, and to be moved and entertained by, her fine writing. The Bocas Lit Fest hasn’t yet officially started, but one of its most important events may already have taken place.