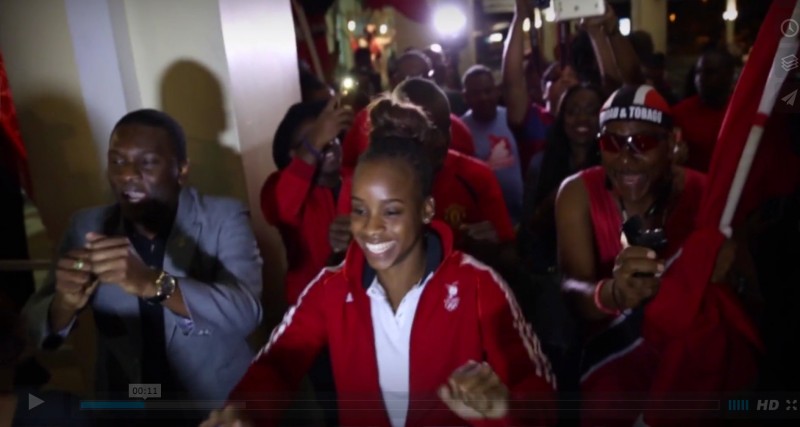 Screenshot of the “Welcome Home Thema” video on Vimeo by Unlock Media TT.

Update: Since this post was published earlier today, an online petition addressed to Trinidad and Tobago's Minister of Sport is being circulated, in an effort to cut funding to the Trinidad and Tobago Gymnastics Federation (TTGF) with immediate effect. The petition has already attracted more than 3,000 supporters. The Sport Company of Trinidad and Tobago (SPORTT) has subsequently asked for a full report about the situation from the TTGF, though it maintains this this request is standard procedure.

Local support for Thema Williams, the Trinidadian gymnast who was pulled from the 2016 Rio Olympics Test Event — ostensibly because of a knee injury — is stronger than ever, following a contentious move by the Trinidad and Tobago Gymnastics Federation (TTGF) board to replace Williams with Marisa Dick, who is Canadian-born but can compete for Trinidad and Tobago because she holds dual citizenship.

Both athletes were in hot water with the association earlier this year over topless photos they had taken of themselves and posted on their Instagram and Snapchat accounts; their matters are currently before a TTGF disciplinary committee.

She may not have got the chance to prove herself in Rio, but Williams returned to Trinidad to great fanfare — supporters and well wishers greeted her at the airport, where she received a hero's welcome to the strains of cricketer Dwayne Bravo's song, “Champion”, which went recently burgeoned in popularity after the West Indies cricket team won the international T20 tournament.

Williams’ American coach, John Geddert, who some are saying “opened the door” for the TTGF to pull the gymnast from the event because of the overly dramatic wording of his training report, just as dramatically came to her defence, admitting he regretted his choice of words:

You are supposed to give them an honest report of what is going on … Now, in hindsight, it obviously should not have been.

Geddert told sports website Wired868 that he had “never had to deal with so much drama as I've had in this two year period—ever”, and maintained that the TTGF had a bias against Williams.

Even though Williams’ replacement managed to secure Trinidad and Tobago's first ever position at the Olympics, Geddert insisted that Marisa Dick was the wrong choice and has “zero chance” of medalling.

The TTGF, in a press conference, maintained that its decision was done in the best interest of Williams, saying it didn't want the athlete to “injure herself even more” — but the board seems to be the only one coming to its own defence. LoopTT reported that even as Williams’ supporters continue to agitate for the resignation of current TTGF board members, “word is that a few of the members are indeed looking to step down”:

The reason for their impending resignations. they said, is total dissatisfaction with the board which has done nothing for the development of the sport for the past eight years and the handling of the whole situation with regard to Williams.

‘They have done nothing to develop the athletes. Their focus has been totally on Olympics and even that the preparation has been shoddy and biased. Clifton McDowell (coach) developed Thema without any assistance from the TTGF. The clubs have been so dissatisfied that in fact four clubs boycotted last year’s Nationals, two of which were Olympia and Tots and tumblers. Reasons for that boycott were direct issues with the running of the organization: No AGMs [annual general meetings] for years, no financial statements, and so many more internal issues,’ the members revealed.

The Loop report also revealed that the TTGF's decision may well have litigious consequences, since due process was allegedly not followed in pulling Williams from the competition:

The process is such that the board cannot remove/pull an athlete from competition. The process is that grounds have to be given by the coach doctor/physio and head of delegation who was in this case Nicole Fuentes. It is them and not the board that makes the decision. It is interesting that there are issues now surrounding her (Nicole Fuentes) now that she has confirmed that Thema was in fact fit enough to compete. When it seemed that she was in their corner it was all fine and well for her to go to Rio under the title of Head of Delegation and physiotherapist, paid for by public funds, sanctioned by the board. Now they, the board, are claiming that she is not in fact a physiotherapist but rather a massage therapist. All very convenient since her findings that Thema was in fact fit enough to compete.

Still, the anonymous sources were careful to say that “the gymnastics federation didn’t do anything wrong in theory. They responded to a report from coach. What Brian Lewis [president, Trinidad and Tobago Olympic Committee] and the TTOC have to do is investigate if the process was followed according to the athlete’s agreement and act accordingly.”

Public opinion is squarely against the TTGF, however. On Facebook, social media user Abeo Jackson said, in a public post that she wanted people to share:

This is bigger than one incident, this is about years of horribly poor stewardship of the board of an organization, for whom it seems the welfare of athletes is nowhere on their to do list. From botched elections, to the withholding of financial statements, to organization wide known preferential treatment of certain athletes. They must step down!!

Everybody but the board seems to want to leave this organisation. If they are however, receiving public funds I expect that the policy adhering Ministry of Sport shall conduct the necessary investigations.

Most netizens believe that despite the TTGF's protests, there is more in the mortar than the pestle; at this stage, it it still unclear who to believe, though Wired868 gave it a good shot when it tried to reconstruct the timeline of Williams being pulled from the competition and Dick being flown in to Rio. You can follow developments on Twitter using the hashtag #WeSupportThema.