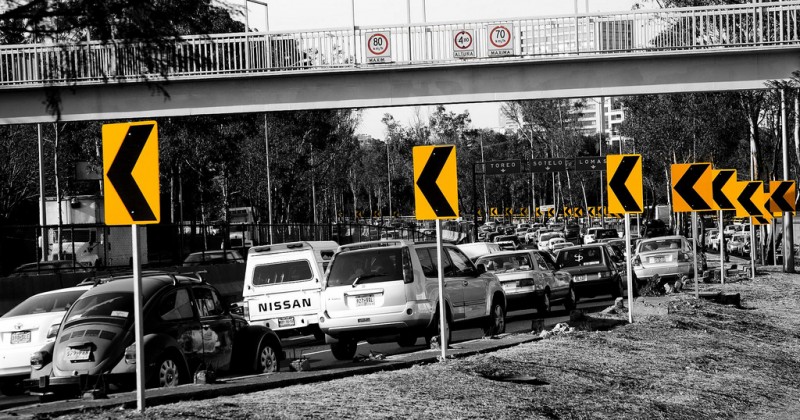 The high levels of pollution, particularly from car emissions, in Mexico City — rated number 10 on the list of the world's most polluted cities according to Deutsche Welle — has caused the government to take a number of unpopular palliative measures. Among them? Restricting the number of vehicles allowed on the road.

The Valley of Mexico, the region where the country's capital city as well as counties of the states of Hidalgo, Morelos, Puebla and the State of Mexico are located, is densely populated (in 2005 there were 20.54 million inhabitants). Its geographic situation adds to the problem since it is a large basin surrounded by the 5,500 meter tall Popocatépetl volcano and other high mountains. On top of this, according to official statistics, there are 4.5 million motor vehicles registered (not counting motorcycles) in the capital city alone. This means approximately 42 vehicles for every 100 inhabitants.

This large fleet of vehicles generate emissions that are difficult to disperse, bringing with them elevated ozone levels and causing poor air quality, low visibility and health risks. In 2013 the government created the Megacity Environment Commission (CAMe) to deal with the issue and to coordinate the efforts of the states located in the Valley of Mexico.

In mid-March and the beginning of April 2016, the air quality declined considerably, forcing CAMe to call for an environmental contingency and to once again take up a program developed in the 1990s called “No Drive Day”. This initiative restricts the use of privately owned cars one day a week (or two days a week under more serious circumstances) based on the color of a sticker assigned to vehicle depending on the last number of the license plate.

The return of “No Drive Day” brought with it an apparent unanimous antagonism against CAMe, especially against Miguel Ángel Mancera, the head of government of the Federal District. Residents of the capital city have been using Twitter to express their anger.

I confess that I really want to put a muticolored sticker on Mancera's forehead so he can NEVER move around! #NoMorePollution

Twitter user Enrique Sandoval shared this meme, which features Mancera in one of the helicopters he usually travels around in:

Image: I don't know why there's so much drama. I am also not using my car.

María Andrea asked for his resignation:

Mancera should resign already and be replaced by somebody who knows what they are doing, please No Drive Day.

User Mr. Catastrophe ventured to address those who are in favor of the No Drive Day:

I think that all of those who make fun of or are in favor of No Drive Day are the same people who don't have cars.

Truck drivers blocked two highways, complaining that they couldn't enter the city because their vehicles didn't have permission to drive in.

Photos of the traffic jam on the México-Qro highway because of the truck driver's blockade vs. No Drive Day

Raul O’ shared one of the reasons that the city's taxi drivers might support the measure:

I was surprised that a taxi driver was in favor of No Drive Day despite having to be off work on Wednesday and Saturday. “There is less competition”, he says

What about public transportation?

The environmental contingency of the last weeks has proven how insufficient the capital's public transportation is.

This is not a Terry Gilliam movie (Monty Python), this is the subway in Mexico improved by the No Drive Day

This is what it's like in the subway in Mexico City on the first day of No Drive Day. Photos by @oct_bolloa

The driving restrictions together with the precarious services offered by the subway and other public transportation services led people with access to technology and credit cards (not available to the majority) to use the private car service Uber — which traditional taxi drivers in the city loathe. The high demand allowed Uber to raise their prices, provoking further anger from the city's residents.

Uber, what a shame! Troubled waters means business for “entrepreneurs”. Your greed is unbelievable. #DynamicRates.

The account of Los Simpsons MX exemplified Uber's conduct with this GIF:

Leo Zuckermann also described Uber's tactics as “monopoly-like” in his complaint about the price hike:

The environmental contingency decree and the government-enforced obligation to stop so many cars has created a monopoly-like practice by Uber. The issue doesn't have anything to do with service but with the predictable and rational drive to get profit. Of course, we Mexicans know a lot about this: how many times have consumers been squeezed dry by monopolies with the complacency of the state.

The newspaper El Universal reported that, according to the head of government of the Federal District, Uber's abuses will not continue and they will be regulated by his administration.

Despite the high levels of pollution, many locals clung to their cars and refused to change them for rental bicycles that are available in some areas of the city, as seen in this image: 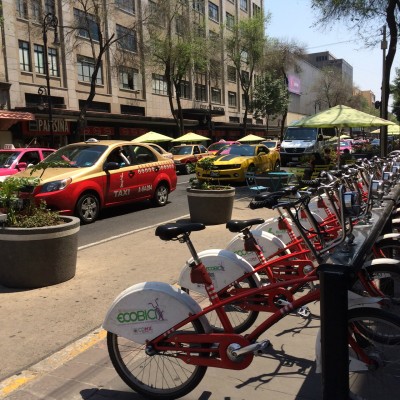 Bicycles that are available for the general public. Unused because locals seem to prefer cars even during environmental contingency days. Image taken by the author.

The fact that Mexico City is considered less polluted than Delhi, Karachi, or Beijing could be the result of legal factors, as the Spanish NGO Inspiraction has pointed out:

The air contamination problem in Mexico is mainly due to a lack of appropriate control standards for these particles which would avoid possible health risks for its citizens. Official Mexican regulations related to the pollution particles limits are not up to date and are quite permissive in comparison with World Health Organization recommendations.

Sergio Sarmiento, whose opinion was picked up by the website Politikkon, has questioned the efficacy of “No Drive Day”:

The removal of one million vehicles from the streets yesterday did not reduce traffic or pollution. This is just more proof that No Drive Days only make life difficult for people who work.

The measures adopted by CAMe to alleviate the overwhelming pollution affecting the city will be in place until June 2016. Will they be effective? Will the residents get used to them? We will be paying attention to the developments to find out.