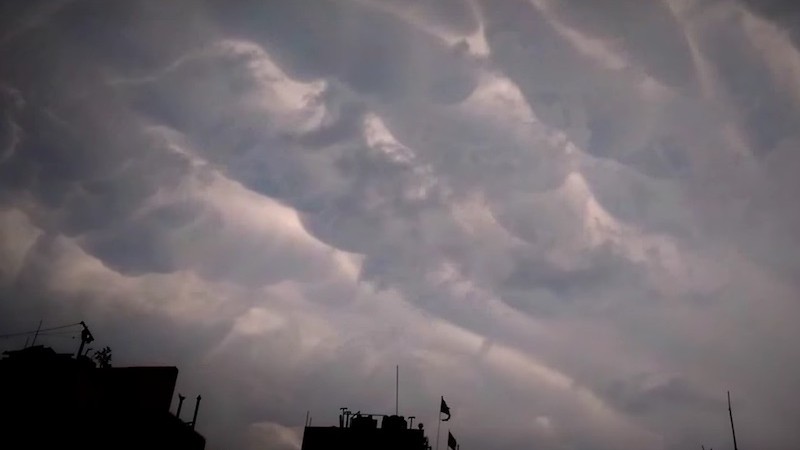 Kathmanduites took to social media to express their fascination with the unusual dark clouds covering the skies of Nepal's capital city on 18 April 2016.

Incredible Cloudscape almost inspired me as an abstract-impressionist-artist.
Never saw in my life, pic.twitter.com/iODNthHFco

They were mammatus clouds, whose name come from the Latin mamma, meaning “udder” or “breast”. The clouds can often signal a coming storm.

It wasn't the first sighting of the strange patterned clouds. Since the April earthquake wreaked havoc in Nepal last year, it was the second incidence.

@KarnaSakya yes they are mammatus clouds, has been spotted twice since #earthquake from #Kathmandu following the dust storms, coincidence?

However, some people were afraid of the clouds. Kishor Pradhan wrote on Facebook comparing the mammatus clouds to so-called earthquake clouds that can predict temblors — a supposed phenomenon that doesn't have much backing in the scientific community:

Let's hope these mammatus clouds don't surprise us as EQ clouds…as the storm that was experienced was not that big…thanku for the important pics Paldup! Check out the EQ cloud theory at
https://en.m.wikipedia.org/wiki/Earthquake_cloud

Some well-wishers from abroad were worried about any bad omen the clouds might carry. Wesser D Bhutia wrote:

Pls take care agya. My prayers are with u all. However, weather here in sikkim is as tormenting as there. I get psyched out thinking what is gonna happen next. I know that we have to accept things the way they come as we can do nothing about it…yet…like every normal human I fear nature's wrath and just pray day in and day out to keep every living soul world over. ..safe and sound.

The bizarre sight brought many out of their homes. While people enjoyed the meteorological show, snapped photos and shared them online, many failed to realise that it was a rare occurrence. When people recognised the significance of what they were seeing, it was already too late for them to capture the beautiful clouds. They had already vanished!

It was perfect timing. When I took the pictures, the clouds were already disappearing and I could not capture them perfectly.