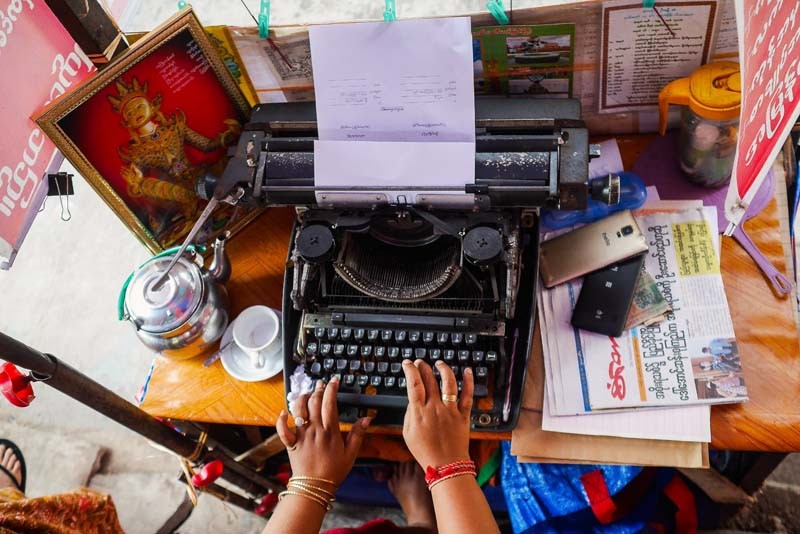 A female typist works on a document from her kiosk on lower Maha Bandoola Park Road. Like an increasing number of typists in Yangon, she relies on a typewriter professionally, but for personal purposes, she uses a smartphone. (Photo and caption: Tin Htet Paing / The Irrawaddy)

This article by Tin Htet Paing and Sally Kantar is from The Irrawaddy, an independent news website in Myanmar, and is republished on Global Voices as part of a content-sharing agreement.

On most afternoons, Tin Zaw Htet sits in front of a Cold War-era typewriter surrounded by satin-and-gauze portfolios and legal certificates hanging in the unrelenting Yangon sun.

On the lower block of Maha Bandoola Park Road, several typists are dutifully stationed in individual makeshift stalls alongside him. They earn their living within a bureaucracy that demands typed forms over handwritten ones, but in a locale where computers and printers remain luxuries and electricity is still unreliable.

Tin Zaw Htet shares a laminated certificate verifying his completion of a one-month typing course at a vocational training center five years earlier. Upon graduation, he left a job selling pet fish and joined his aunt, also a typist, in opening their own kiosk.

“I only want to work in my own business, even if I have to run it on roadsides,” he said.

The 28-year-old earns 1,000 kyats (US$0.83) per page filling out marriage certificates, power of attorney forms and other legal contracts with Burmese or English typescript; on an average day, he gets between 10 and 15 pages of work. 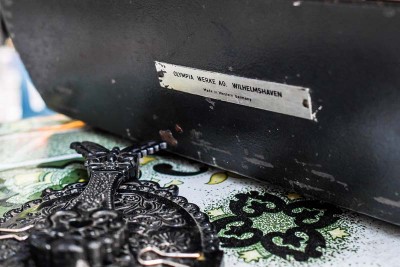 The typewriters in use on the streets of Rangoon were imported from Western Germany in the early 1960s. They have since been repaired and restored, often multiple times. (Photo and caption: Tin Htet Paing / The Irrawaddy)

Small plaques engraved with the phrase “Made in Western Germany” betray the age of the typewriters that propel this small sector. Fifty-year-old Win Htay, who restores the machines, is nearly as old as the typewriters he has been repairing since he was 13 years old. He claims that they were first imported for Burmese civil servants under either U Nu or Ne Win’s government in the early 1960s.

Auctioned, refurbished and resold through the decades, the sturdy metal structures have yet to render themselves obsolete in Burma, even as the government offices that originally bought them now largely rely on computers, and lie 200 miles north in purpose-built Naypyidaw, no less. From a modest workshop in downtown Rangoon’s 35th Street, Win Htay still sells them, fully restored, for around 100,000 kyats (US$83). He said:

I have a close attachment to these typewriters. This is all I know how to do. I don’t even know how to touch a computer. 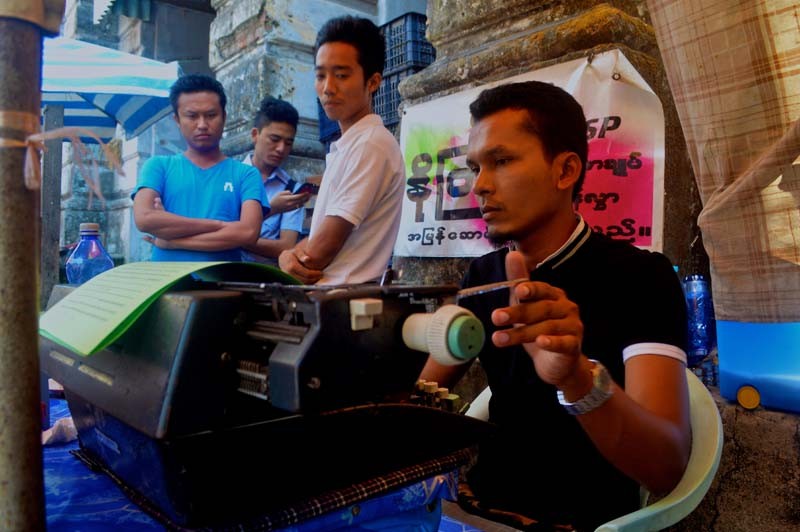 Tin Zaw Htet (front) fills out a document on his typewriter while other typists watch, waiting for customers or for work that can be shared. The biggest pressure that they face, he said, is “to not make any mistakes,” because, as he points out, “on a typewriter there is no ‘backspace.’” (Photo and caption: Sally Kantar / The Irrawaddy) 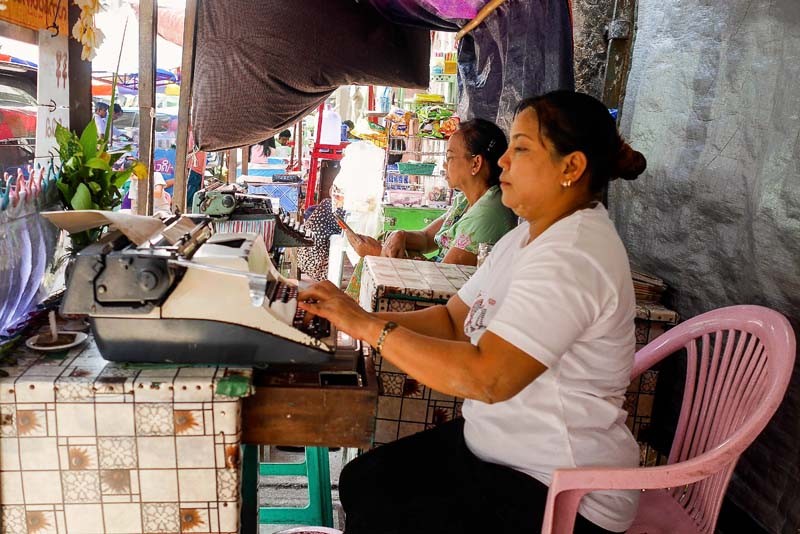 Female typists at work. While it is perceived as a field dominated by older men, The Irrawaddy found both men and women of varying ages typing up documents in streetside booths. (Photo and caption: Tin Htet Paing / The Irrawaddy) 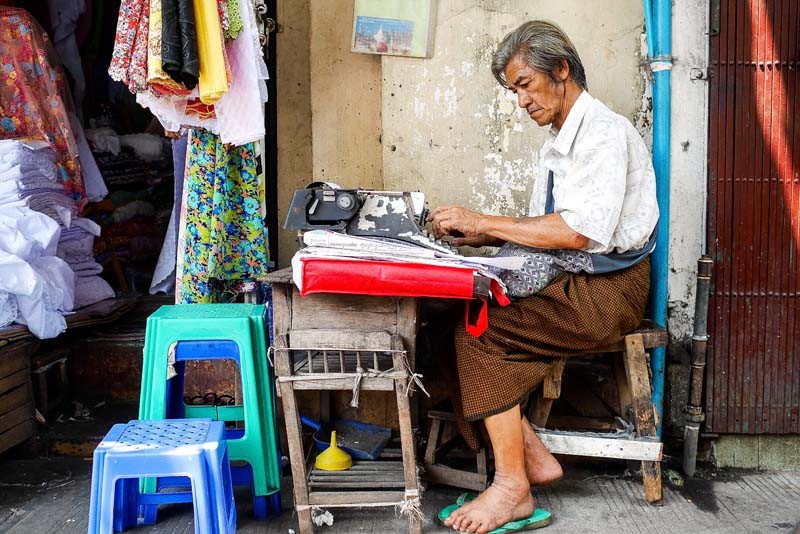 On downtown Yangon’s Pansodan Street, a typist fills out legal documents from his sidewalk station. (Photo and caption: Tin Htet Paing / The Irrawaddy)

When government offices began to move from Yangon to Naypyidaw in 2005, Win Htay lamented how many ambitious typists and repairmen also relocated their businesses—and their typewriters—to the remote new capital. He is defensive when asked about the machine’s place among an increasing selection of more modern gadgets, foreseeing a continued reliance on typewriters in courts, schools and government offices particularly in rural parts of the country. About 70 percent of Myanmar’s population still has no access to the electricity needed to run more updated apparatuses.

“All they need is ink,” he pointed out, a testament to the typewriter’s sustainability.

Tin Zaw Htet acknowledges that one day he may have to adapt his work to accommodate changing technology, but says that he is lucky: He also knows how to use a computer. However, it is not a shift he will wholly welcome. He adds:

[Typewriters] challenge us to be more efficient, to see our errors on paper, so we are more careful not to make mistakes.

He also describes a satisfaction in working with the older machines.

The feeling of using typewriters and using computers is different. We can feel a lot of feedback from a typewriter’s keys. It makes noise. I kind of like it.

Typewriters brought to Burma during an earlier era will likely continue to maintain a value beyond nostalgia and, for now, a function on the country’s technological spectrum. 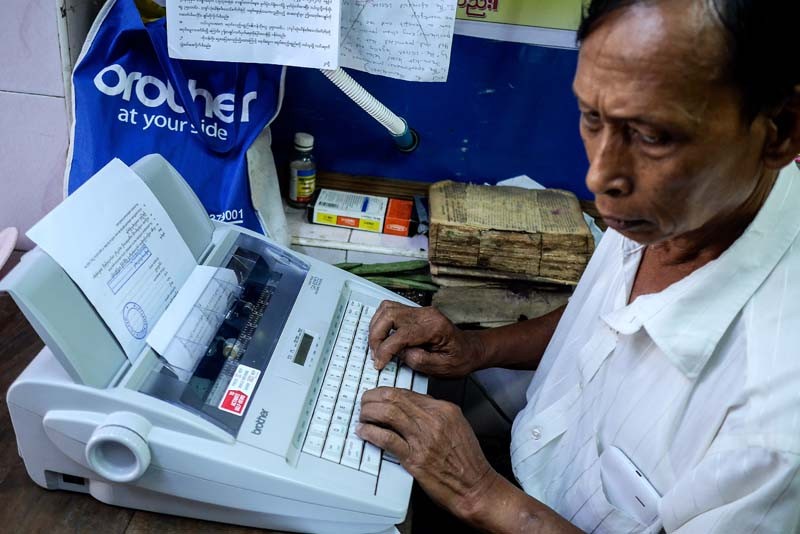 A man works on a document using an electric typewriter inside a downtown Yangon shop. While typists traditionally station themselves outdoors near courts and government offices, small indoor shops are opening in the vicinity, featuring more modern typewriters, as well as copiers and computers. (Photo and caption: Tin Htet Paing / The Irrawaddy) 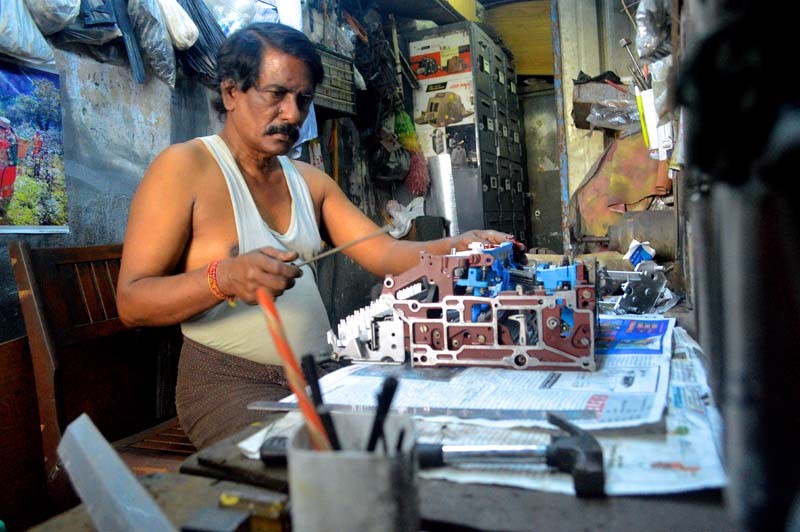 In a small shop on 35th Street, Mya Win, 62, repairs a broken typewriter purchased from a government auction. He has been working on the machines for 40 years. (Photo and caption: Sally Kantar / The Irrawaddy)