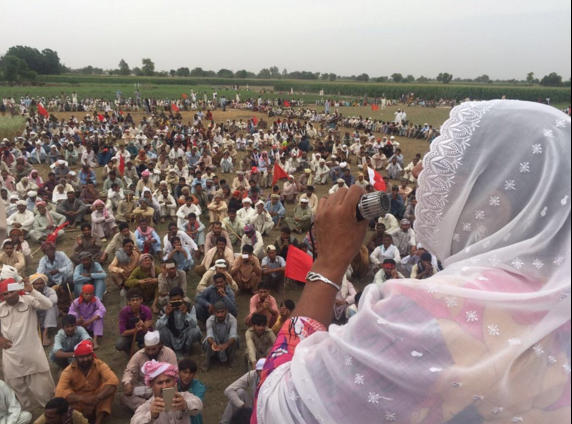 Hundreds of farm tenants are protesting against the arrest of peasant leader Mehr Abdul Sattar in Okara, a town in the Punjab province of Pakistan. Sattar is the secretary general of Anjumane Mazareen Punjab (AMP), or the Tenants Association of Punjab, which represents over 100,000 peasants in the region who live and work on government- and military-owned land.

The government has responded with a heavy hand by deploying tanks to the town, sparking some on social media to use the hashtag #PeasantsNotTerrorists.

There's a long history of conflict between the government and the tenant farmers. The crop-share agreement that began under the British rule was changed to a cash-rent and yearly lease system by the Pakistan government and military in June 2000. This is when the farmers began to campaign for legal titles to the farms.

However, between 2008 and 2009, a contract changed the farmers from sharecroppers to renters. The agreement turned tenant farmers into contractual workers, and a yearly lease means should they be given an eviction notice the farmers would have six months notice to vacate the land. The tenants who have been tilling the land for centuries see this as a way to deprive them of their rights and make it easier for authorities to evict them.

The arrest came ahead of a peasant's convention that was supposed to take place on Sunday, April 17. But on Friday, authorities arrested Sattar. Four other peasant leaders have also been arrested, sparking the #FreeOkara5 hashtag.

Political workers and activists have taken to Twitter to highlight the arrests and ongoing operation against the tenant farmers. Activist and writer Tooba Syed detailed the history of the resistance movement.

Farooq Tariq, the general secretary of Pakistan's far-left Awami Workers Party, has been sharing details from the protest on Facebook:

When I wrote that army tanks are deployed in Okara against tenants, many made fun of us and ridiculed the information. Here are pictures for your attention. 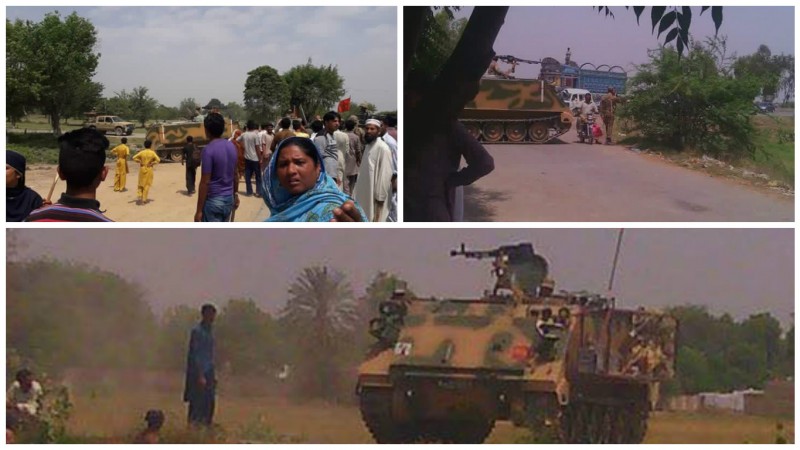 ‘Is such a harsh crackdown needed?’

The state is using the National Action Plan, geared towards fighting terrorism, to crack down on protestors

NAP is for everyone who is against the state narrative even if they're innocent. While the elites are allowed to rob #PeasantsNotTerrorists

The Human Rights Commission of Pakistan has issued a statement terming the state's reaction as ‘strong arm tactic’.

Renowned author Mohammed Hanif mocked the authorities for registering a case against 4000 peasants for ‘injuring police’ at a protest:

Across board accountability: 4000 Okara peasants bookedhttp://www.dawn.com/news/1253058/over-4000-okara-tenants-booked-for-injuring-police

Journalist Ali Salman Alvi pointed out the hypocrisy in authorities’ actions against Sattar by comparing the numerous cases they've filed against him to the lack of cases filed against Mullah Abdul Aziz, a religious cleric who runs Lal Masjid (red mosque) in Islamabad who has been known to incite violence and support banned organizations like ISIS.

150 cases registered against Mehr Abdul Sattar, a local peasants leader in #Okara, NONE against Mullah Abdul Aziz of the Lal Masjid. #NAP

While economist Asad Sayeed criticized the lack of media coverage:

This is just one of the many incidents where the National Action Plan, passed as a strategy to fight violence perpetrated by various militant groups operating in the country, has been used disproportionately to clamp down on protesters. Nevertheless, activist and political workers are determined to get traction to the resistance movement through all mediums possible. How the government and military responds to the requests to release #Okara5 remains to be seen.

This post was updated, an earlier version of the story incorrectly stated that the contract change for the peasant famers took place during General Pervez Musharraf's administration and referred to Farooq Tariq as General Secretary of Labour Party. Thanks to Wasio Ali Khan & Ismat Shahahan for spotting the errors.