Pakistan Confronts Qadri Protestors, But It’s Anybody’s Guess How, Thanks to Media Blackout 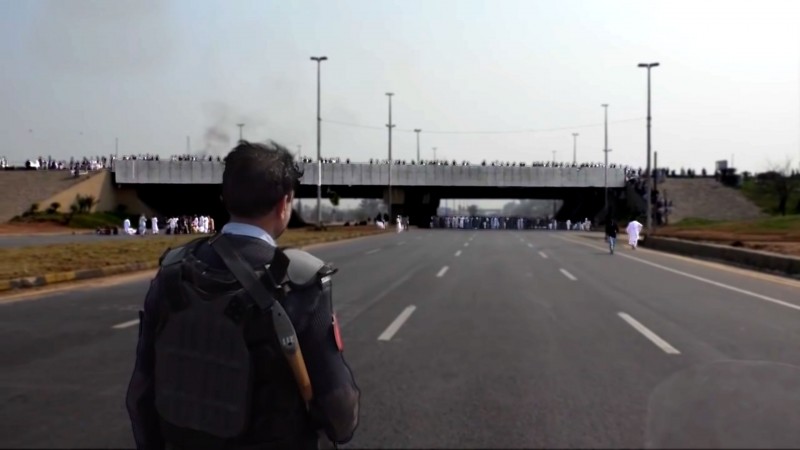 Last month, more than 2,000 demonstrators staged a sit-in at Constitution Avenue inside the Pakistani capital's so-called Red Zone to protest the execution of Mumtaz Qadri, who was a former Punjab police commando hanged in February for assassinating Punjab Governor Salman Taseer.

The protest continued for days, despite barricades put up to prevent demonstrators from entering the area, which is also home to several landmark government buildings. Protesters finally dispersed after the authorities promised not to revise Pakistan's notorious law on blasphemy. (This was just one of the demonstrators’ demands.)

The country's journalists mostly ignored the protest, thanks largely to the state's growing reliance on media blackouts, which officials order, they say, to curb street violence. The blackouts are rarely challenged in public, and security officials generally enjoy the benefit of the doubt among groups who might insist on greater media independence.

Hundreds continue protest outside Parliament. On loudspeakers there: ‘U martyred one Qadri, we now have 1000s more’ pic.twitter.com/g9lXSRNtrv

Control of the airwaves has not, however, established an undisputed calm. Sudden road blockades, the absence of information on television, and the suspension of cellular telephone services have all contributed to a state of public frenzy.

‘Did They Not See This Coming?’

For most people inside Pakistan, social media was the only source of news about last month's vandalism and unrest. In light of the protests’ violent turn, one of the most hotly debated national issues has become the police's ability to handle public disorder. Since Qadri was executed, there's been an unspoken fear of retaliation in the form of terror attacks from banned religious outfits that support him.

Anticipating possible violence, the government increased security on the day of Qadri's execution, but this measure failed to prevent demonstrations from becoming violent. According to reports, many of the protesters had even traveled to Islamabad from other cities throughout Pakistan, raising concerns about the state's failure to plan ahead.

Many Twitter users criticized the unlawful and destructive protests using the hashtag #IslamabadUnderSeige:

Not a single fanatic in #IslamabadUnderSeige should be spared! Arrest them all and charge under Anti terrorism act! #Eradicate #Eliminate

Why to invest so much when Islamabad is so fragile that it could easily be conquered with sticks and stones!

In Islamabad no state and no government is existing. Chaos every where. #IslamabadUnderSiege #PrayForPakistan

‘What of the Media Blackout?’

In a press release issued by Pakistan's Electronic Media Regulatory Authority (PEMRA), state officials instructed news channels to report “responsibly,” citing the example of media coverage that followed the attack in Brussels.  This tweet from Television anchor and journalist Maria Memon summed up the Interior Ministry's expectation from journalists, the ministry believed that complete media black-out of the protest helped in ‘curbing the situation’ and termed it  ‘positive role by the media’.

Interior Minister praising the positive role of media, that curbed the chances of situation getting out of hand at D chowk.

The government maintains that limiting or even eliminating media coverage of civil unrest helps curb violence. But not everyone agrees with this approach. On PEMRA's official Facebook page, commenting on the agency's press release, Islamabad local Adnan Khan writes:

would take commercialisation – crass or otherwise – of the media if that is what it takes for media to do it must, i.e. report and inform people. Under PEMRA, that has been consistently thwarted. I wonder why no one has challenged the existence of this Orwellian body on constitutional grounds.

Others, meanwhile, say a complete media blackout is necessary, while state officials prepare to clear out protesters:

Hopefully media will not give any coverage to Qadri's chaleeswan tomorrow. Let these fan boys get even more pissed off.

What's the flip side of a media blackout?

What message does the govt's silence over pro-Qadri demonstrations, posters, media coverage convey? Appeasement or cowardice?

Gov's decision to black out Mumtaz Qadri's funeral was good decision but at least allow the media to show what his followers are doing.

Media blackouts to Qadri supporters March won't help. State should denounce and ban all processions at once. Bht hogya tamasha!!!

‘Why Did We Accept Their Demands?’

The ten demands issued by protesters include the unconditional release of all Sunni clerics and leaders charged with various crimes, including terrorism and murder, the recognition of Mumtaz Qadri as a martyr and the conversion of his Jail cell into a national heritage site, assurances that the blasphemy laws will not be amended, and the removal of Ahmadis and other non-Muslims who occupy key posts in the national government and other offices.

The Pakistani state and public should deal firmly with the agitators by dismissing all demands, writes Shamila Ghyas, a blogger:

We need to reject their demands, dismiss them, ridicule them, show them a mirror and make them see that we are not scared of them.

As part of the crackdown, police detained more than 500 protesters and the country's Interior minister issued the following warning:

After the protests ended, reports emerged that the authorities accepted at least one of demonstrators’ demands (agreeing not to reform the blasphemy law), though the Interior Ministry has denied any written agreement. Without independent media coverage, however, the government has managed to ignore pressures to be more transparent about its dealings with the protesters. Journalist Taha Siddiqui raises an important point about media outlets self-censoring that he believes paved way for more government controls: