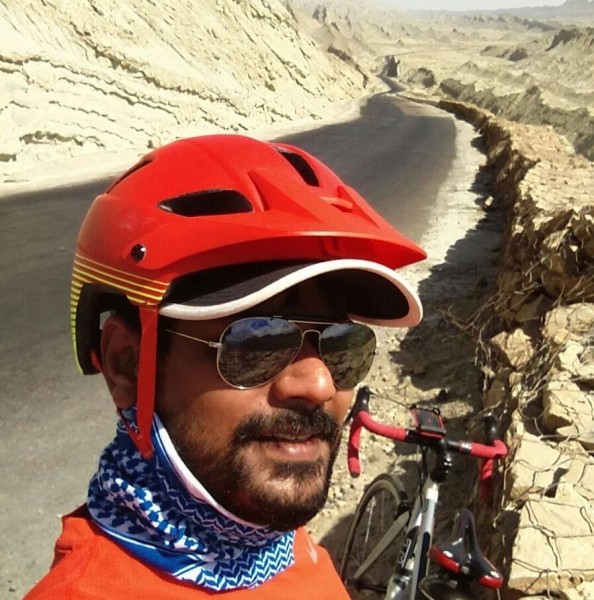 Norbert Almeida, an expert in incident and crisis management as well as safety and security, dedicates his time to providing free safety tips to the public.

Imagine getting routine updates that keep you informed about possible traffic jams, security concerns or even best routes to navigate cities around Pakistan. Look no further than Norbert Almeida, more popularly known as Norbalm, a security expert who is hell-bent on making it easier for citizens to stay safe and secure — and for free.

Almeida works in Pakistan, as well as in countries across the Middle East and Africa, and for the past several years has committed to providing updates and security guides to the public through social media.

Here's a taste of what Norbalm's updates look like. Planning to travel across cities this week? Here's an update on protests being held in the coming week:

Have questions about visa issues?

But the real strength lies in providing informed updates during tense situations and even media black-outs:

Netizens direct their security concerns and doubts to Almeida on Twitter and crowdsource information to support his updates:

@norbalm good morning. Is it school holiday today? Students & parents are suffering due to bad management of sindh govt. #khialerts

@norbalm Is there any sort of petrol shortage in Karachi as well ? #khialerts

On his blog, Almeida shares extensive yet simple security guides for nearly every situation possible, from travel scams, earthquake safety and a phenomena called “express kidnapping“, which became known specially since ATMs became commonplace. Although express kidnapping is not widespread– it's not very frequent but not uncommon either– Almeida tackles all kinds of safety and security issues and believes that it's important to keep informed and put safety first:

An express kidnapping is when the victim is abducted and forced to withdraw their own ransom from an ATM or bank. One method is when the kidnapper accompanies the victim to the bank and has them withdraw cash at the counter by presenting a cheque.

What follows is a step-by-step instruction and possible precautions:

Victims of such incidents are mostly those who are commuting. Therefore, it is advisable to always take precautions while on the move:

— Lock your car doors and keep the windows rolled up.

— If on a motorcycle then place a bag on the rear part of the seat to prevent someone from jumping on board (pillion rider).

— Remain alert to people loitering around your vehicle if it is parked.

Another piece takes on the scary yet often ignored instance of being trapped in an elevator and tackles various scenarios from basic to worse:

Scenario: What should you do if the elevator is in free fall?

Advice: Modern elevators rarely fall as they are produced with multiple safety measures to prevent such a situation. However older technology using and/ or ill maintained elevators have been reported to crash though this is still extremely rare. (…)

Some things to always remember:

— Lay on the floor on your back with your arms tucked in by your side and legs together.

— Position the chubbiest part of your body on the floor if you are unable to lie down.

— Do not jump just before the moment of impact as it could cause far more injuries.

In Pakistan, where even some of paramedics sometimes lack proper training and equipment to respond to bombings or shoot outs — tactics sometimes employed by militant groups in the country — Almeida's security updates and guides are creating space for a discussion around the importance of security training and self-awareness. Some of these situation are awfully frightening, and that's more of a reason for the public to be informed of the ways in which they could possibly tackle the situation. In one post, Almeida talks about what to do if you are caught up in an area where an attack has taken place:

— Listen to the local news and pay heed to instructions issued by authorities.

— Avoid the area of the incident until it’s declared safe by the authorities.

— Follow the advice of the emergency services at all times. In events that directly impact you

— Foremost, remain calm and check that those with you and around you are not physically harmed.

— Be prepared to prove your identity if stopped by the authorities; failure to do so may result in detention by law enforcement personnel particularly if you’ve no plausible justification for being in the vicinity of the incident

His blog contains a contact list of all ambulance services, police stations, fire brigades and emergency service numbers across Pakistan. A one-stop shop for all things safety and security.

Even the most basic alerts sent out by Almeida hold the power to save lives, as an anecdote shared on Almeida's Facebook page explains. He wrote that 12 years ago, he received a late-night phone call from a woman, sobbing as she told him, “thank you”. What for? She had received a message from him warning of a protest in Karachi and was able to take an alternate route. Time was of the essence — she was travelling in an ambulance on the way to the hospital with her husband, who had suffered a massive heart attack:

The reason she was thanking me; the doctors told her had they been 10 minutes late he would not have survived.I don’t know where she is today or who she was?The one thing she did do was ensure that 12 years later I continue to send out alerts and now many more have copied the model and are doing it on much larger scale.It was about the period of that call that I actually had considered stopping these alert messages, not really sure why though. However her effort to reach out and say Thank You made me rethink that decision.So today if you’ve benefited by these alerts you know who to Thank. No, not me but that lady who reached out that night to say thank you.