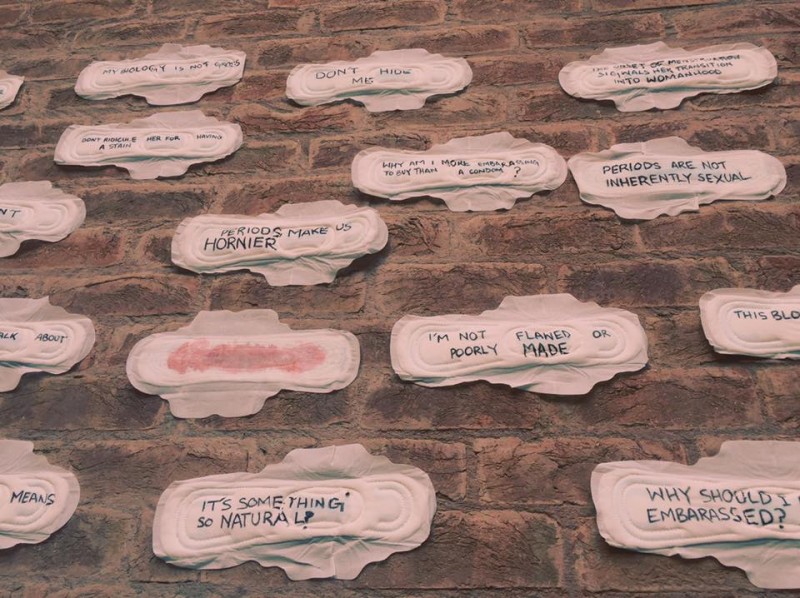 In an attempt to break the taboos around menstruation, students from a private university in Lahore, Pakistan, plastered sanitary pads on campus walls along with anecdotes revealing how women are shamed for having periods.

In Pakistan, much like other parts of South Asia, conversations around menstruation are considered a taboo. Something as basic as getting a sanitary napkin from a grocery shop is an unpleasant experience. Stand up comedian Shahzad Ghias Sheikh shared his experience being a teenage boy assigned an unusual task:

As a teenager I lost a bet with a friend. I was at her mercy. She could make me do anything that she wanted to embarrass me. She chose to make me buy a sanitary pad at the LUMS Superstore in front of other students. I walked in brazenly, asked for one and duly paid for it. I was too young to understand the stares I received from other students or ponder why it was given to me in a concealed brown bag. I even had no idea why she would think this would embarrass me. She did. Unlike me, she had lived through this experience ever so often: made to feel guilty about her own anatomy. A shopkeeper, usually a man, wrapping it in a brown paper bag to hide her ‘shame’. God forbid another man might see a woman publicly holding a pad and it might hurt his conception of public sensitivity. This is what male privilege is; making a woman jump through hurdles to get a basic health product and making her feel immense shame for it just so that the masculinity of some men is not challenged.

It's this very stigma that the young students set out to counter. Some of the comments scribbled on the sanitary napkins read, “It's something so natural”, “Why should I be embarrassed?” and “I am not flawed or poorly made”.

The action aimed at breaking at taboos has garnered a wide range of reactions, including those who stuck to the idea that menstruation is shameful:

Piece of advice to BNU students, start defecating in the open. There's no shame in it. It's a daily, rather than monthly bodily function.

really shame, it is Pakistan??https://t.co/IpxKClWu8U#BNU

What the f***k these girls are doing in Beacon house university :/ is it ethical ??? #TSK

While others criticized that perception:

There's nothing gross abt #Periods.
If women wouldn't have periods, you wouldn't have been born!#ItsNormal ! #BNUhttps://t.co/FmBUsElvY2

In the comment section on the Facebook page “Girls at Dhabas” (dhabas are roadside restaurants, traditionally considered to be male spaces) Aisha Gulzar opined that while periods are natural, this kind of protest isn't productive:

I was teaching science syllabus to girls in low income community of bin qasim hyderi. They thought periods were punishment cause Eve made humankind fall. They thought these were unpure. I explained them that it was natural. Next day 5 parents complained from local.community and local govt teachers with whom I was working as a fellow teacher from an NGO, whispered this , ‘ Aisha is teaching girls about sex .’

Putting pads on wall in BNU where populace should be responsible for their own education is not a fruitful step. These are bold protest which can cause reactionary backleash rather than awareness .

Everything needs a proper stance and induction so its respectful to cultural norms of that particular country.

While another comment by Amina Faiz took the criticism head on:

hello friends if your initial thought after seeing this is “this is way overboard” or “im a feminist but there is a limit” then realise that you are part of the problem and the fact that you immediately associate this with shame is exactly what these girls are trying to combat. realise that you have internalized concepts of misogyny and how girls are shamed for things they can't help. and instead of policing how they should resist, or debating whether or not this is effective, support them. let them know how brave they were in doing this. there is no one way of resisting oppression and if you have better ideas, great! organize and execute them yourself, they'll be there to support you too, i'm sure. and it's true that oppression, in this case shaming girls, varies depending on your privilege, but its still there? it stills needs to be tackled? you don't take a risk like this for fun or because you're a “crazy feminazi”

But is this about class privilege?

Shaan Taseer, son of former Punjab Governor Salman Taseer, criticized the campaign for being ‘elitist’. Journalist Madiha Tahir chimed in, and what ensued was a spectacular discussion on class, privilege and feminism.

Taseer, who belongs to a fairly privileged family, responded to Tahir's critiques by calling her a “lower class guttersnipe”.

When’s the last time a member of Pakistan’s English-speaking, Medium-reading upper crust was dismissed for belonging to a low order of society? Less unusual, when is the last time a man called feminism a bunch of croc and then called a woman a stupid bitch? We’re so used to being in a position to abuse our privilege that we don’t even realize when we’re doing it.

Reading Madiha’s conversation with Shaan, we were faced with the the ugly reality in Pakistan. Class and gender are mediated through abuse when someone on the losing end of the equation challenges it.

Regardless, author and academic Raza Rumi summed up how the campaign can be seen as success because it got people talking about periods, stigma and the needs to confront the taboos

Students of #BNU-a private university in #Lahore #Pakistan smashed a taboo by covering a wall with #sanitary pads. pic.twitter.com/senAZJ04mU