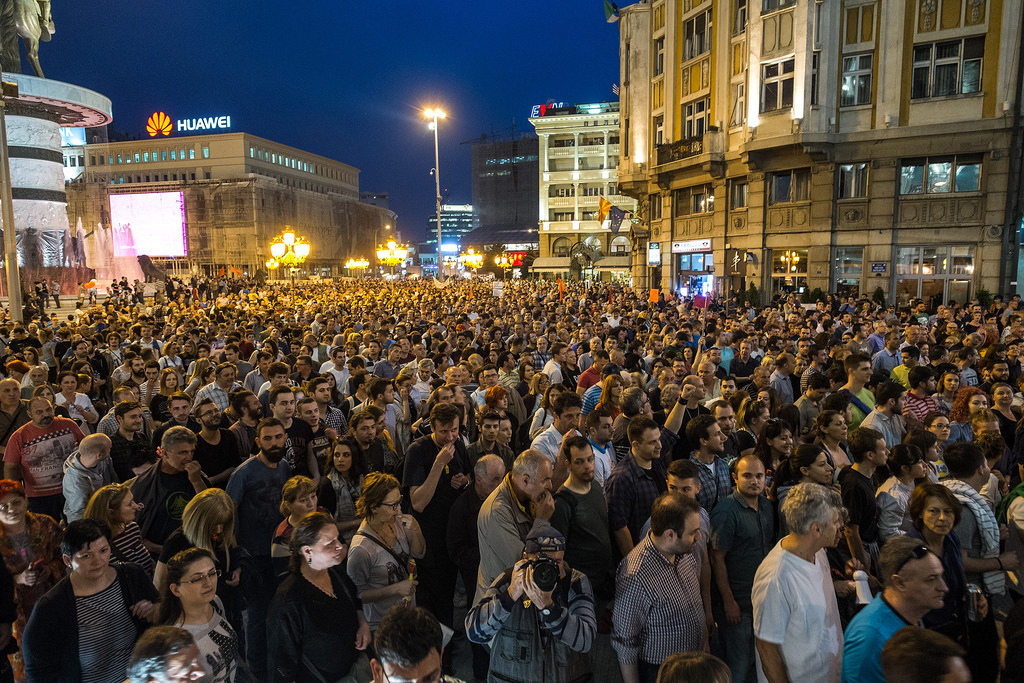 More than 10,000 people reached the main square in Skopje, Macedonia, on Monday to protest president's pardon for top politicians. Photo by Vancho Dzambaski (CC BY-SA) from a photo album documenting the seventh day of protests.

As political crisis deepens, citizens of Macedonia are flooding the streets in Skopje, Bitola, Veles and several other cities across the country to express their discontent.

Tens of thousands of Macedonians have gathered together in various cities each day at 6 p.m. since the president announced his decision to pardon government officials accused of corruption and abuses of power from prosecution. As the second week of protests unfolds, the grassroots movement #protestiram (“I protest!”) seems to be gaining momentum.

On April 12, President Gjorge Ivanov announced he was extending legal immunity to more than 50 top politicians and their associates who are under investigation from the Special Prosecutor's Office for suspected corruption, illegal wiretapping, election fraud, misuse of power and even the cover-up of murder. The alleged crimes emerged from leaked wiretaps made public by the leader of the political opposition, Zoran Zaev, last year. Zaev revealed that the conversations of more than 20,000 people in Macedonia were being illegally recorded on the order of former Prime Minister Nikola Gruevski.

The same day the pardon was announced, Macedonians took the streets and have continued to do so every day since. Protesters gather in front of the office of the Special Prosecutor to show support for their work, and then move through the city center to the so-called People's Office of the Macedonian president (ransacked by protesters on the second day of demonstrations), then the Parliament and towards the government building. 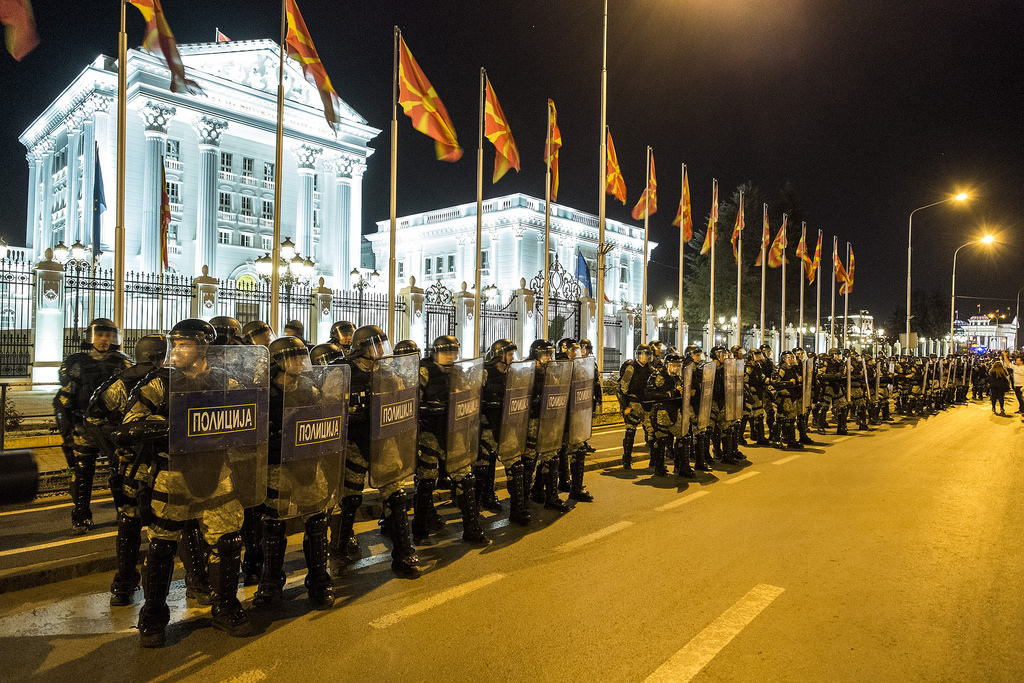 Alongside the protests in Skopje, several thousand protesters gather each day in other Macedonian cities, such as Bitola, Kumanovo, Strumica, Shtip and Veles. The diaspora has also started protests in New York and Washington.

On the fourth day of protests, April 15, as the protesters in Skopje reached the area near the government building, the police at first blocked their way. After a large crowd gathered, citizens were allowed to occupy the entire area in front of the new Baroque-style building.

On Saturday, April 16, organizers estimated that more than 10,000 people took to the streets on the peaceful, non-violent protest. Unofficial citizen-stewards tried to keep any provocateurs away. Despite that, one person deemed by protesters to be a provocateur (people either working on behalf of authorities or who have sympathies for the authorities who try to provoke a violent reaction from police) physically attacked a young woman as she was trying to throw paint at the recently built Triumphal Arch, part of the government's project to revamp the capital called ‘Skopje 2014.’ The swift reaction from the citizen-stewards prevented the incident from escalating. 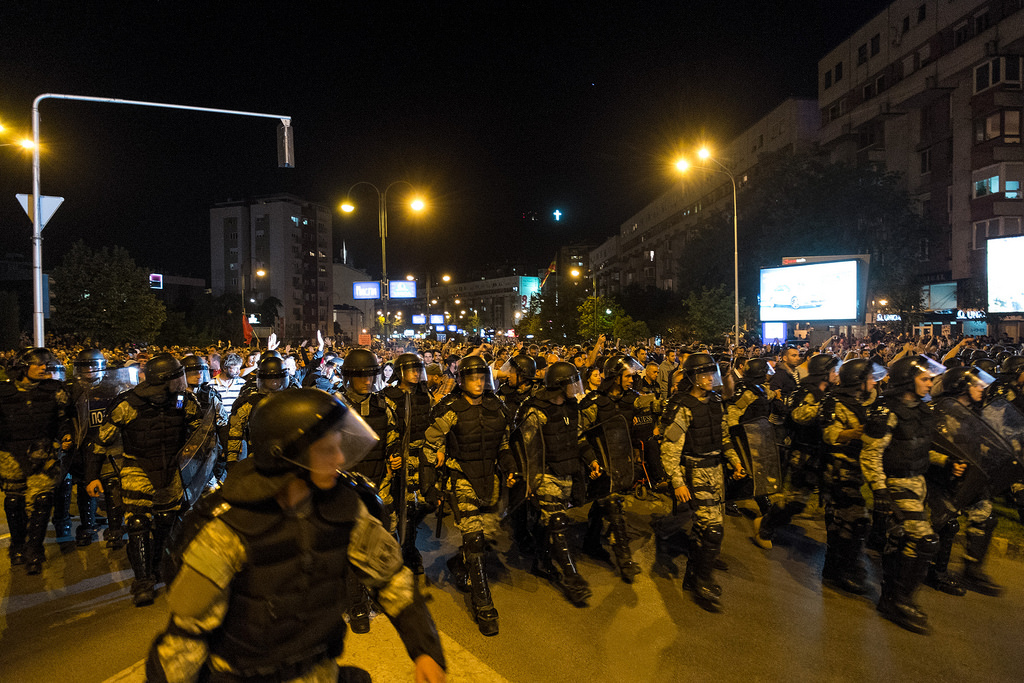 On the fifth day, the police removed their blockade near the government building after 10,000 people gathered. Photo by Vancho Dzambaski (CC BY-SA) from a photo album documenting the fifth day of protests.

On Sunday morning, the organizers of the Skopje protests, an informal group of activists including members of civil society organizations, announced that the day would be used for assessment and reflection. This did not stop a smaller group of citizens of Skopje who again marched the city streets and put pro-protest signs on some of the statues from the Skopje 2014 project. Citizens in other cities did not rest either. Demonstrations in Bitola continued, where protesters pushed against the police cordon (but no violence broke out as a result), and entirely new cities “erupted,” most importantly Veles.

On Monday, April 18, the movement continued with even higher attendance. This time, except for the Parliament, the main square and the government building, the protesters went in front of the Ministry of Culture and threw paint at it. The Ministry of Culture was of the main institutions involved in the Skopje 2014 development project.

Counter-protests, formally organized by a group called GDOM (Citizen Movement for Defense of Macedonia) whose leaders don't hide their affection towards the right-wing ruling party VMRO-DPMNE, have been cancelled since the weekend. As the group explained, they already reached their goal — to have elections on June 5. The president of the Parliament signed off on the formal decision on Saturday to hold parliamentary elections as part of the Przino agreement, overseen by the European Union and the United States in 2015 to end political crisis in the country (although all the conditions outlined in that deal for fair elections have not been met). The opposition has said they will boycott elections. 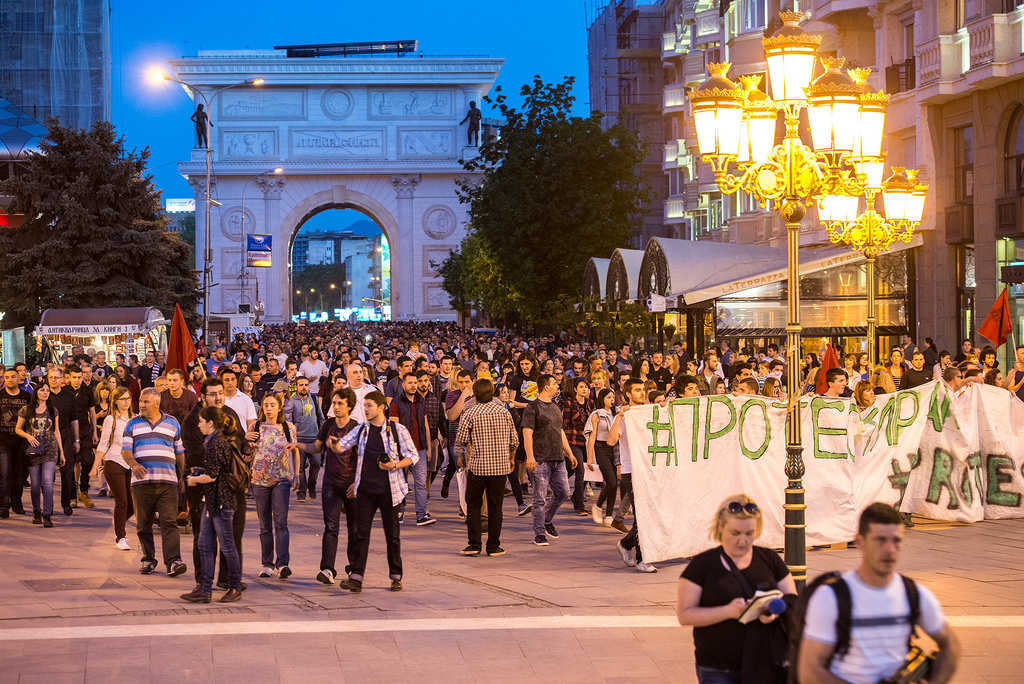 Protesters crossing under the Triumphal Arch, part of the much criticized ‘Skopje 2014′ project for revamping the capital. Photo by Vancho Dzambaski (CC BY-SA) from a photo album documenting the sixth day of protests.

But, now GDOM announced they will hold the “mother of all rallies” on Thursday in support of the government and the ruling party. Rhetoric online is getting heated. For instance, the director of the state archive wrote menacingly about the “I protest!” movement on Facebook using the discriminatory term “Sorosoids” and hateful speech against the “traitors” and LGBTI people in his further comments:

You've incited the anger of the people. We are going out into the street!
On Thursday, Sorosoids better stay at home.

The EU invited the leaders of the four biggest political parties in Macedonia, which is a candidate for EU membership, for another round of negotiations in Vienna on April 22. Although she wouldn't officially confirm, EU spokesperson Maja Kocijancic said that the EU Enlargement Commissioner Johannes Hahn hopes to meet the leaders of four parties very soon to discuss the recent escalation of the crisis.

In addition to the the four leaders, Kocijancic said that Commissioner Hahn is in contact with other key partners like the US to discuss ways to solve the crisis and to ensure that leaders continue with the implementation of the Przino agreement. Opposition leader Zaev has stated that before going to these new negotiations in Vienna, his party SDSM will consult civil society, including groups involved in the protests.