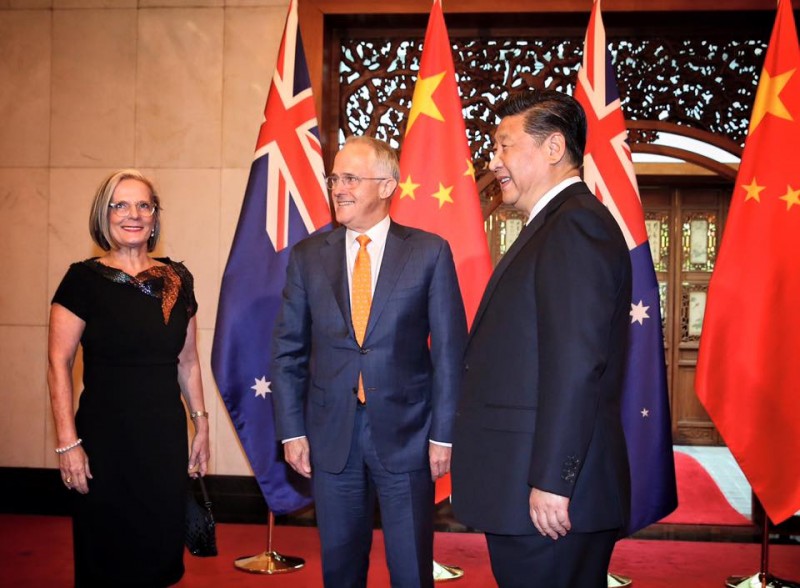 Following Australian Prime Minister Malcolm Turnbull's whirlwind visit to China from 14 to 15 April, some are questioning his decision to remain tight-lipped on the country's human rights record.

With a 1,000-strong entourage of business leaders in tow, the 36-hour trip saw Turnbull reach an agreement to expand Australian and Chinese tourism, announce a $100 million joint research and science program, and sign a deal aimed at raising the profile of Australian football. While the prime minister assured reporters that human rights issues had also been raised, he made clear such discussions would be kept strictly behind closed doors.

@MGliksmanMDPhD @HuffPostAU Leaders don't seem to have an issue with criticising countries like Iran, so why dance around China ????

Turnbull's reluctance to disclose specifics is consistent with the tendency for senior Australian officials to avoid publicly confronting China over human rights issues. Earlier this February, Foreign Minister Julie Bishop was similarly unwilling to dish on whether she had expressed concern to her Chinese counterparts about China's intimidation and detention of at least 170 lawyers:

I have raised these issues in the appropriate place which was in the ministerial and other meetings that I’ve held today. And I won’t go into the details, I don’t think that would be useful.

It seems even a social media ‘like’ violates this self-imposed, unspoken vow of silence.

Days before Turnbull's trip, Australia's Treasurer Scott Morrison claimed his account was hacked after appearing to ‘like’ an op-ed — written by Australia Director at Human Rights Watch Elaine Pearson — urging the prime minister to include human rights on the China agenda:

Malcolm Turnbull is to make his inaugural visit to China as Australia’s prime minister against the backdrop of a new bilateral free-trade agreement and growing unease over tensions in the South China Sea. It would be a mistake, however, if Turnbull’s talks in Beijing focus only on trade and security.

The Chinese government is imposing the most intense crackdown on civil society in at least two decades. Turnbull should not ignore the backdrop of repression that has intensified under the three years of President Xi Jinping’s rule.

BuzzFeed Australia's Political Editor Mark Di Stefano was among the first to pick up on Morrison's unusual Twitter move.

Well then. The Treasurer's most recent Twitter like is pretty interesting with the PM visiting China. pic.twitter.com/nXb9xVZd1j

Within an hour, the post was no longer tagged as ‘liked’. A subsequent tweet from Morrison appeared to blame the slip-up on unauthorized activity.

It appears my twitter account may have been accessed by someone unauthorised to do so. This has been rectified.

Australians were quick to jump on the treasurer's reaction:

Don't worry @ScottMorrisonMP we know it didn't come from you as you don't believe in human rights in Australia, let alone China #auspol

@ScottMorrisonMP Did you accidentally tweet something compassionate, honest or with integrity for your position in government?

So I guess the Treasurer didn't really like my article on China after all? Still I hope he reads it https://t.co/5HvyQ0nsPO

When human rights concerns in China are raised publicly, it is usually done on a less personal, more institutional basis. For instance, Australia was one of 12 countries who signed a joint statement at the United Nations Human Rights Council condemning China's intensified crackdown on human rights activists. A “frank and constructive exchange of views” also takes place at the infrequent Australia-China Human Rights Dialogue, the last of which was held in February 2014. It was not attended by the prime minister or any senior cabinet minister.

Explaining the silence at the top

Perhaps the most obvious is the government's need to ensure sensitivities over human rights do not derail the China-Australia Free Trade Agreement (ChAFTA), which recently came into force last December. The deal, which includes across-the-board tariff reductions for a range of Australian exports, is being enthusiastically spruiked by officials as “[supporting] future economic growth, job creation and higher living standards through increased goods and services trade, and investment.”

Others suggest the government is shying away from imminent charges of hypocrisy, in light of Australia's much lambasted treatment of asylum seekers and its indigenous population.

@MGliksmanMDPhD @ralphd2 Or doesn't want to be called out by China for hyprocrisy over treatment of Aboriginals & Refugees?

There is another possible explanation: Australia's leaders are simply too well-mannered to call China out.