If Kazakhstan Made Valentine's Day Cards… 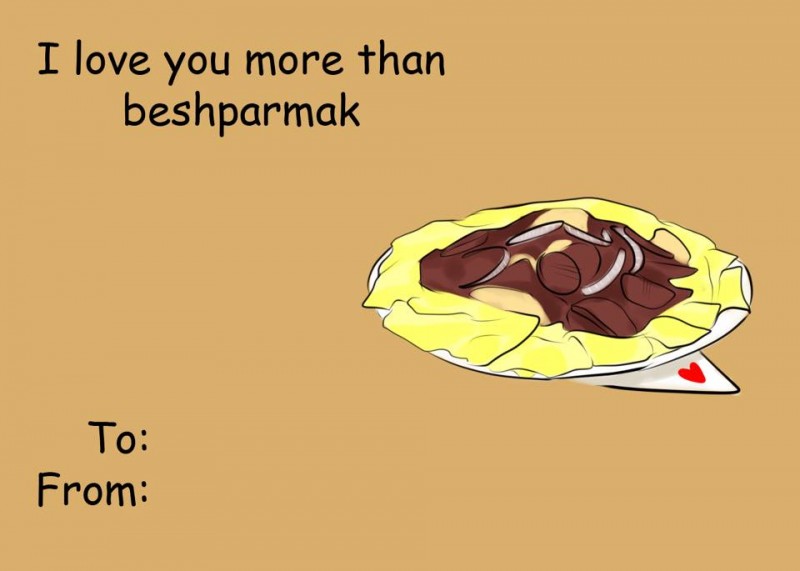 In recent days internet users in Kazakhstan have been sharing a series of romantic greeting cards themed on the Central Asian country's cultural and political pillars, after it marked its own version of Valentine's Day on April 15.

The feel-good cards have brought a little levity to social media noise in the republic of 17 million, which in the last year or so has been characterised by public grumbling over an extended economic depression.

Indeed, that may have been the point of the exercise, since the sharing of the cards seems to have begun with an employee of a network of schools for gifted children bearing 75-year-old President Nursultan Nazarbayev's name.

But pseudo-propaganda aside, the images have been a hit among local users, for both patriotic and ironic reasons.

One of the most widely shared of the cards is one bearing the message ‘I love you more than beshparmak’ (pictured above).

This is indeed a statement of undying love, since meat and noodle combo beshparmak is the meal that sets the tone for most family occasions, especially weddings.

The card would also find grateful recipients in neighbouring Kyrgyzstan, where the main national dish is the same, although Central Asia's non-nomadic peoples, such as Tajiks and Uzbeks tend to prefer pilaf, or plov.

Shashlyk – meat cooked on a skewer, like kebabs – and a spectrum of varieties of milk, cream, yogurt and soft and hard cheeses would make up typical meals and snacks in this region. But for special occasions, like weddings, holidays and funerals, or to honor visiting guests, there is only one option: beshbarmak, or simply et (which is pronounced as yet and simply means meat in Kazakh).

Beshbarmak (which means “five fingers,” either because it was traditionally eaten with the hands or because it should be made with meat that has a layer of fat five fingers high – the jury is out) sounds like a basic noodle and meat dish – which I suppose it is. The ingredients are minimal: dough, meat, onions, meat broth, some spices and oil or butter, but their preparation and presentation are crucial, and often ritualized. 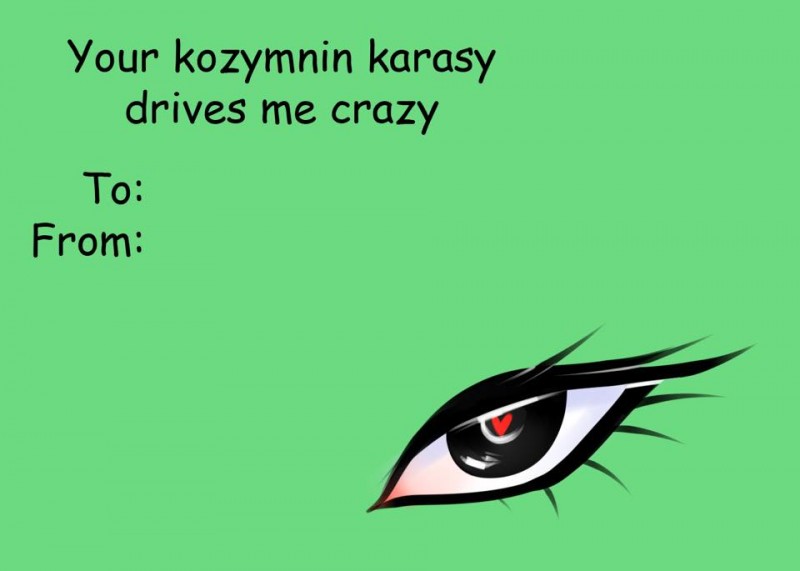 Respected by the Russian government during the time of Moscow's empire in Central Asia, honoured during the decades of the Soviet Union and totally revered in independence, Abay Kunanbayev stands unopposed as Kazakhstan's most notable historical figure.

A poet and composer of great talent, Abay was a Kazakh to his core, but also a major Russophile who translated the works of Russia's own bard Alexander Pushkin.

That makes him a particularly useful figure in modern-day Kazakhstan, where the authoritarian government stresses inter-ethnic harmony and officially embraces both Russian and Kazakh languages and cultures. (According to official statistics, between a fifth and a quarter of Kazakhstan's population are ethnic Russian).

Kozminin Karasy is Abay's most famous love ballad, often performed at the same weddings where kilograms and kilograms of beshparmak are consumed.

Here the Kazakh-language song is performed by modern-day artist Artemis: 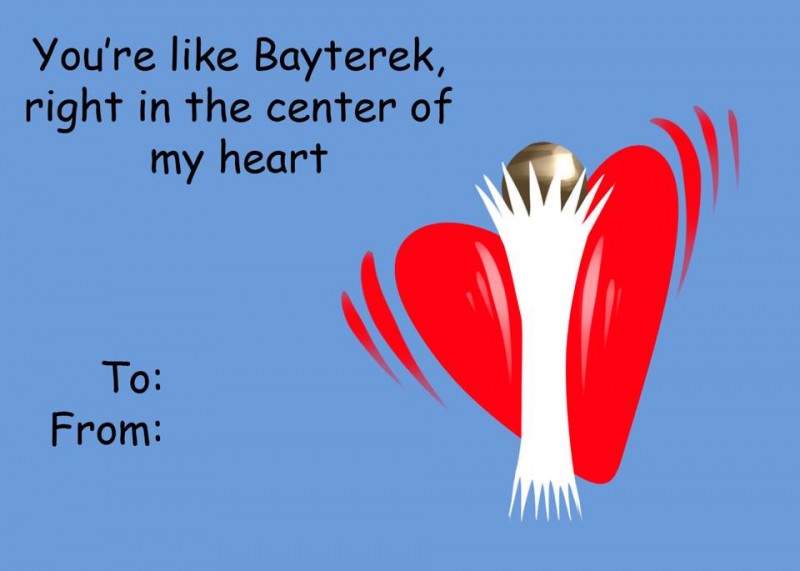 Kazakhstan's futuristic capital Astana has no shortage of eye-catching architecture but the structure that has come to define it the most is the 105-metre tall observatory Bayterek, which is impressive both to look at and look out from.

The tower was the brainchild of President Nazarbayev, and symbolizes the Kazakh myth of the magic bird Samruk, who laid a golden egg on the tree of life.

The tower is probably a bit too Dubai-like for comparisons with the Eiffel Tower, but romance is what you make of it.

Astana was just a minor steppe settlement before Nazarbayev took the decision to turn it into the nation's capital at the expense of the 1.5 million strong city of Almaty in 1997. 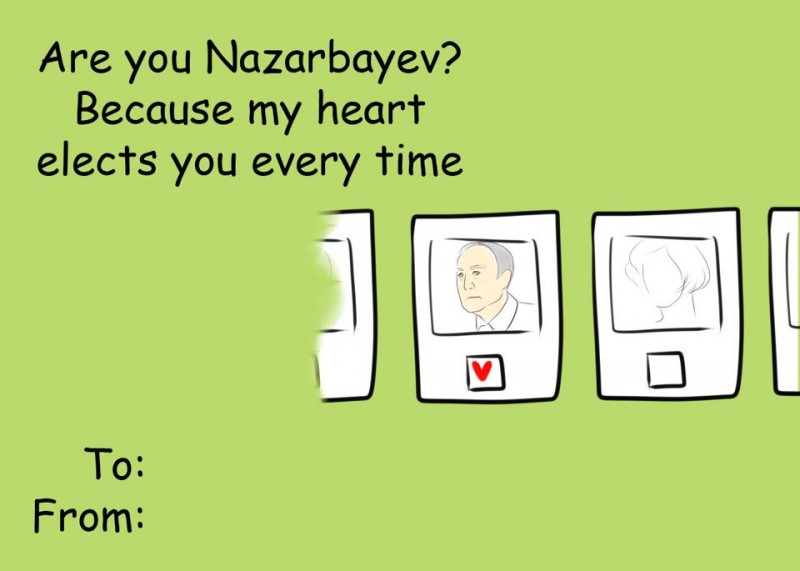 Nursultan Nazarbayev, 75, has been in power in Kazakhstan since before the break up of the Soviet Union.

And now for some politics.

This card alludes to the fact that for Kazakhstan, Nazarbayev has always been “the one”.

The ageing dictator who has not indicated a successor was elected to a five-year term in April 2015 and enjoys genuine popularity.

He has seen some of that erode, however, amid bottom-of-the-barrel prices for Kazakhstan's key crude oil export.

During these difficult economic times, Nazarbayev, whose grandson Nurali featured in the Panama Papers leak, has not helped himself by going on inane televised visits to supermarkets and making comments about foie gras that critics say show he is out of touch with ordinary Kazakhs.

Nonetheless, love is no democracy and when it comes to Kazakhstan and Nazarbayev, it seems to be a case of “'till death do us part.”

The Day of Kozy Korpesh and Bayan Suulu (Nationa Lovers’ Day) on April 15 is Kazakhstan's very own take on Valentine's Day and mirrors a trend across ex-Soviet Central Asia to foster alternatives to a holiday widely associated with the emptiness of the Western capitalism.

Kozy Korpesh and Bayan Suulu were two “star-crossed lovers” of Kazakh folklore, but unlike Romeo and Juliet their parents had initially agreed for them to marry before Bayan's father Karabai welched on the deal and promised her to another man.

Their story, which ends with Kozy murdered in his sleep by the man Karabai subsequently married Bayan to, is thought to have first appeared in an oral medieval poem and was noted in writing centuries later by Pushkin.

The pair have a tomb near the village of Tansikin in the Ayagoz district of East Kazakhstan and are honoured by monuments in both Astana and Almaty.

Still, their holiday has not quite displaced Valentine's Day in the hearts of the country's 21st century lovers.

It was introduced in 2011, but one government official admitted to having only learned of its existence last year.