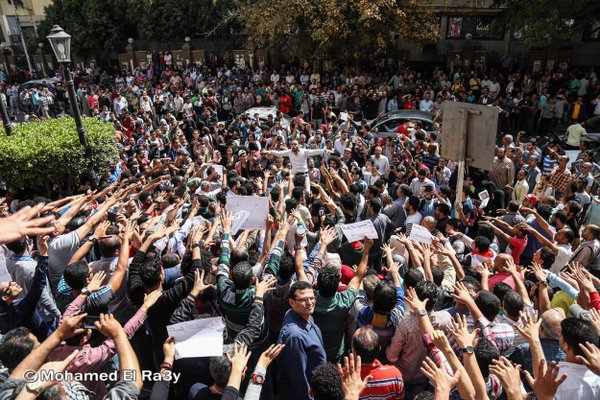 Thousands of protesters took to the streets across Egypt yesterday to call for the fall of Egyptian President Abdelfattah El-Sisi's regime. Chanting slogans and urging others to join forces through social media platforms, the angry scene exacerbated as marches assembled with other protesters at the Press Syndicate's stand in downtown Cairo. Tight security heightened in the iconic Tahrir Square which witnessed the 25th of January revolutions sit-ins of 2011. Armored vehicles, and police personnel filled the square to block any efforts for the protests to take place.

Earlier last week, Egyptian president Abdelfattah El-Sisi and Saudi King Salman Bin Abdelaziz re-outlined the maritime border between Egypt and Saudi Arabia. Both parties agreed to hand the ownership of Red Sea islands Tiran and Sanafir over to Riyadh. In essence, anti-regime movements called upon members of Egyptian public to take to streets on Friday in an effort to block the government's decisions. Thousands protested Sisi's decision of relinquishing two islands to Saudi Arabia, and accused him of selling the islands for a fistful of dollars.

Demonstrations at the Press Syndicate were scheduled to start at 4pm, but people started gathering from 1pm when a crowd of the earlier dispersed march of Mostafa Mahmoud street gathered in front of the syndicate. “Down with the military rule” and “Bread, freedom, and those islands are Egyptian” were among the chants.

Clashes took place between protesters and security forces as the latter randomly arrested any one who joined the protests. Reuters reported that 50 protesters have been arrested, and others were detained in the city of Mansoura whilst protesting near the Mansoura Central Square. However, the numbers cited are considered inaccurate as social media activists are calling upon people to report the names of protesters who have gone missing. Activist Sameh Samir wrote on his Facebook account:

We're now collecting the names of those arrested. If anybody knows someone captured, please leave a comment with his name #FreedomFortheGoodPeople

Egyptians Vow to Return on April 25:

Government controlled media outlets did not cover the anti-Sisi protests but social media platforms gave way to protesters to provide updates, live photos, and videos. Egyptians then vowed to return to streets again next Friday, April 25, as the protests ended.

Revolutionary socialists movement commented on the low media coverage to the protests:

Cecelia Udden, Middle East correspondent at Swedish broadcasting Sveriges Radio, posted a video of the protests in front of the Press Syndicate. Protesters were chanting “The people demand the fall of the regime”:

Woman outside Press Synd: "Those islands are just the tip of the iceberg, everything else is also wrong in Egypt" pic.twitter.com/J4juAOdj8M

The numbers are increasing to thousands and the roar is getting louder: “People demand to overthrow the regime”.

Photojournalist Ahmed El Raei shared his photographs in front of the Press Syndicate in a tweet:

in front of Journalists Syndicate since a few
Photo | Mohamed El Raai pic.twitter.com/5l8nIt06dZ

Ahmed Aboulenein, Reuters correspondent in Egypt, wrote his testimony on the police attacks:

“If you don't get up from here now I will arrest you,” plainclothes police officer tells me as I sit near abdelmoniem riad statue.

Arrests made on side streets. A herd of plainclothes just burst into an alley full of cafes and led away two people, smacking away at them

Yesterday was January 25, today is April 15 and tomorrow is April 25. Take your money and leave me my land #FridayOfTheLand

Our date is set; April 25. #FridayOfTheLand

Fatima el Said then draws a comparison between two similar scenes, the one on the left is captured at the events of 25th of January revolution in 2011, and the other is taken yesterday:

One pic is from #Jan25 & the other from today's protests, spirit of the revolution lives on :) #Egypt pic.twitter.com/PrvFasTxMq

Are Egyptians ready for another anti-regime revolution?