Chacha the Chimp Escaped a Zoo in Japan. Angrily. 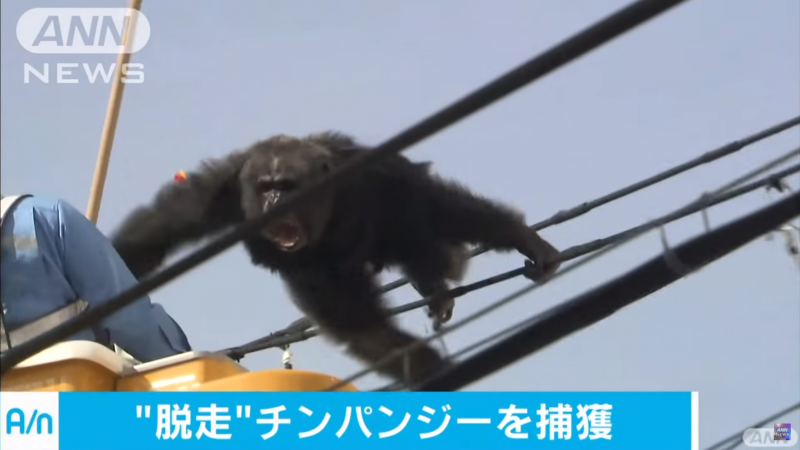 Chacha the chimpanzee lunges at workers after been struck with a tranquilizer dart. Screencap from ANN YouTube channel.

An escaped chimpanzee briefly became a viral news story after angrily lunging at a veterinarian and a power line worker on live television.

After escaping from the Yagiyama Zoo in Sendai, in northeastern Japan, Chacha the chimp took refuge on top of a power pole.

After being struck by a tranquilizer dart at close range, the infuriated animal lunged at two workers, just narrowly missing them.

A chimpanzee was captured atop power lines in a residential neighbourhood after escaping from the Sendai City zoo.

The massive effort to capture the chimpanzee was broadcast on live television in Japan. As they waited for the tranquilizer dart to take effect crews stood by at street level to cushion the chimpanzee's fall from atop its perch.

Unfortunately for the chimpanzee they misjudged where the animal would fall, and it landed on the pavement.

According to the local Kahoku Shimpo news outlet, the chimpanzee is recovering after its fall. The Sendai zoo also provides no updates about Chacha on its web page devoted to the zoo's chimpanzee exhibit.

In Japan, it is common for zoo and municipal workers to participate in training on how to capture escaped animals. This training may have helped in the capture of the chimpanzee.