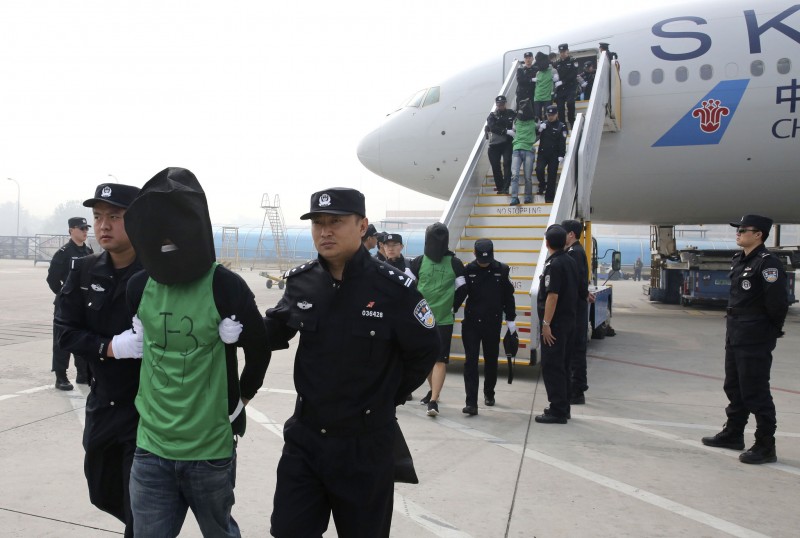 Chinese and Taiwanese citizens who were deported from Kenya arrived at Beijing Capital International Airport on April 13, 2016. Photo from Chinese state own Xinhua News

A total of 45 Taiwanese nationals who were arrested allegedly for committing telecommunications fraud during their visits in Kenya in 2014 were deported to China last week.

Twenty-three of the Taiwanese were prosecuted but found not guilty, and the other 22 had been arrested in a separate case, which had not been gone through the judicial process. While none of them were found guilty in Kenyan court, under the pressure from the Chinese government, Kenyan authorities decided to deport the Taiwanese, forcing them to board planes that flew to China instead of Taiwan.

Taipei described the incident as “illegal abduction” and “uncivilized action” after the first deportation of eight Taiwanese nationals on April 8. But the diplomatic statement had no effect. During the second round of deportation, armed Kenyan police even broke down a jail wall and used teargas to force 15 more Taiwanese detainees into boarding a plane bound for China.

Taiwan has been a self-ruling political entity since 1950, but Beijing insists the region is part of China's territory. Kenya does not have formal diplomatic ties with Taiwan, but it does with China.

Kenya's Interior Ministry justified the deportation route by maintaining that the Taiwanese had entered Kenya via China.

At the same time, Beijing claimed it has jurisdiction over the Taiwanese as they were allegedly involved in telephone scams defrauding mainland Chinese. The Taiwanese nationals deported to China were detained for investigation and may potentially be subject to prosecution in China.

Taiwan's Ministry of Foreign Affairs has reached out to Kenyan parliamentarians and rights activists to provide assistance in filing a lawsuit in Kenya against the country's interior minister, police inspector general and attorney general, accusing them of violating Taiwanese citizens’ human rights by illegally detaining them and working with officials from China's embassy to arrange the deportations to China.

The growth of China's reach has terrified many Taiwanese, who are worried about their personal security when working and traveling aboard. Facebook user Lucien Cheng-hsia Lin was outraged by Kenyan government's decision to deport:

The Kenyan government's act is vicious. The Taiwanese nationals entered Kenya with Taiwanese passports. You accept the passports when they entered the country, so when you deported them, you should arrange according to the passports.

Before the deportations, 10 Taiwanese suspects of telecom fraud had returned from Kenya to Taiwan after they were found not guilty of the charges in a court, lending credence to the belief that pressure from Beijing led Kenyan authorities to later decide to deport the others to China. Lawyer Lu Chiu-yuan raised the following question on his Facebook:

How can Chinese police restrict Taiwanese nationals’ freedom in other countries and bring them back to China for further investigation and trial? If such an argument stands, in the future then if any Taiwanese is involved in criminal cases that are related to mainland Chinese citizens or government, can the Chinese government arrest them in other countries?

Global Voices Taiwanese contributor I-Fan, who co-authored this post, has been to Kenya in the past. She expressed her fears on Twitter:

This incident is terrifying for Taiwanese who are frequent travelers. We could be deported to China if the Chinese government claims that we violated Chinese law (even though we didn't violate any law in the third country). If we accept what happened in Kenya as a standing case, China has the Anti-Secession Law and they just need to claim that we are Taiwan independence advocates to deport us to China for trial from the third country.

In 2011, Taiwan and China reached an agreement on the Cooperation in Fighting Crime, making it so that Taiwanese criminals in a third country would be deported back to Taiwan for trial. Many consider Beijing's recent actions, which seem to go against that agreement, a warning signal to Tsai Ing-Wen, the incoming president of Taiwan who is from the pro-independence Democratic Progressive Party and makes China wary. Brian Hioe from online magazine New Bloom pointed out:

If China is able to influence more nations to simply start disregarding Taiwanese legal authority and treat Taiwanese nationals abroad as though they were just Chinese citizens, this would be deleterious for Taiwan’s ability to maintain itself as a de facto independent nation-state.

China and some segments of Taiwan, in particular the pro-unification party Kuomintang, subscribe to the one-China principle, which holds that China and Taiwan are one nation. The disagreement lies in whose government represents the “real China”. Though Taiwan is self-ruling, it hasn't ever made moves to formalize its independence, and most of the world recognizes the People's Republic of China (mainland China), not the Republic of China (Taiwan).

Beijing tolerates Taiwan's government presenting itself to the Taiwanese people as the legitimate China in the hopes that it will temper the independence movement. But these deportations could end up pushing Taiwanese toward independence and away from the one-China principle, if it means countries will side with China when a Taiwanese safety's at stake.