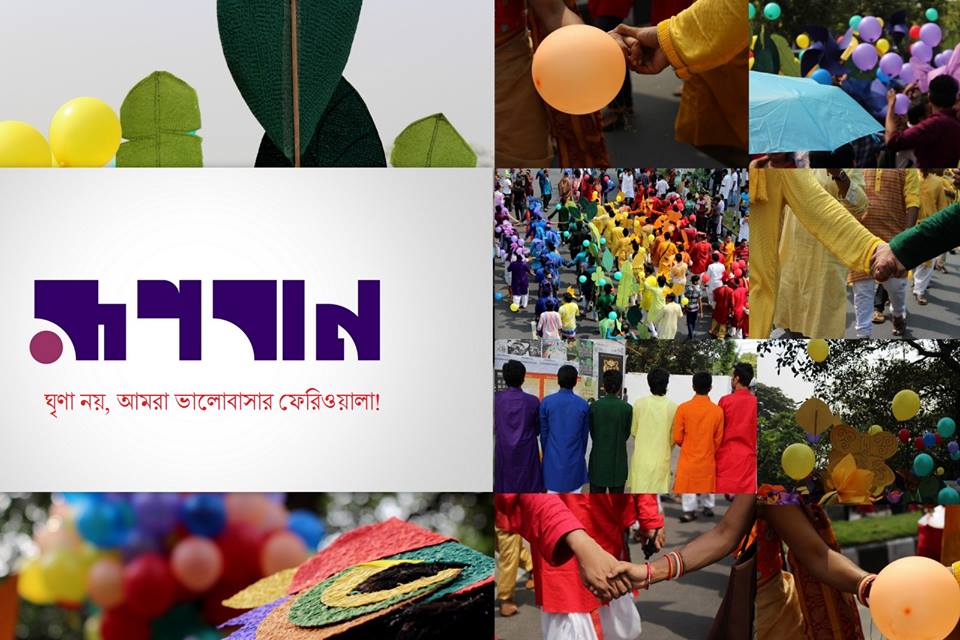 Bangladesh police detained four LGBT activists on 14 April when they appeared at a march with the Mongol Shobhajatra, a colourful procession on the occasion of Pahela Baisakh, the Bengali new year celebrations.

Since 2014, some of the members of Bangladesh's lesbian, gay, bisexual and transgender (LGBT) community have started joining the New Year's festivities in a pride parade, a bold step for the oft-vilified minority. A network called Boys of Bangladesh (BoB), where Bangladeshi gay men mainly communicate via social media, started fighting for LGBT rights in Bangladesh since 2009. In 2013, Roopbaan, a non-political, volunteer-based platform for LGBT individuals and their allies emerged, which started working to raise awareness about Bangladeshis who represent sexual and gender diversity, and advocate for their human right to love and live with dignity. The name ‘Roopbaan’ is derived from a popular Bengali folk character which also means a beautiful and fabulous person. Roopbaan has organized numerous LGBT rights-related events in the Bangladesh capital including publishing of the first LGBT magazine in Bangladesh called Roopbaan, which was launched in 2014.

This year the police were extra vigilant as hard line religious groups have branded the Bengali new year celebrations as un-Islamic and Haram (forbidden). This applies in particular to the Mongol Shobhajatra procession, where traditional symbols and masks of animals and faces are carried.

In an email statement, Roopbaan told Global Voices that this year they had arranged a rally titled “Boishakh, Boichetra and Bandhutta” (Boishakh, Diversity and Friendship). However, they have received some intimidation from some groups who labeled the Roopbaan initiative as a “gay rally” and threatened to beat the rally participants. On the night of 13 April police recommended that they cancel the rally for the sake for for overall law and order situation of Pohela Boishakh, given that they were a target. They agreed and cancelled the rally, informing as many people as possible.

On 14 April most of the Roopbaan members joined the Mongol Shobajatra in the morning without any marks, logo or props and departed after the rally. But around 11am, they heard that police had held five persons for reportedly suspicious behaviour and alleged that they were trying to initiate a gay rally. They went to the Shahbag police station and found that the police kept four persons in a locker and released one. Later that evening the police asked their parents to come to the police station and pick the detainees up. They told their parents over the phone and and face-to-face that their sons were homosexuals and were trying to hold the rally.

Of cause the colors of the rainbow are very very dangerous for nature and for all other humans!!! https://t.co/sXrUvloZwg

In December 2014 a survey by Boys of Bangladesh and Roopban revealed that lesbians, gays and bisexuals in Bangladesh live in fear. The survey had 751 self-identified homosexuals as respondents. More than 50% said that they live in constant fear of their sexual orientation being discovered and only 25.8% of respondents said that they did face discrimination. Many said that they either had no knowledge of or no access to legal support.

Tanvir, a moderator of the BoB community recently told in an interview to Indian LGBT magazine Pink pages how the Bangladeshi society sees the LGBT people:

The educated people in the society or the people who studied in the west accept homosexuality as natural but often it happens that in a class or in a work place not everyone accepts homosexuality. In that case people don’t feel comfortable to come out and it holds the whole process of acceptance a step back. Lesbians are invisible in the society though there is a small group working for a long time. Transgender are visible but people and media often make fun of them which is actually very sad. In my view, bisexuals are increasing in major cities but there is no research data so far on this. Overall, society tolerates it as long as you are keeping it private and following the social obligations i.e getting married!

Another initiative towards promoting LGBT rights in the country is the blog of Bengali humanist and freethinkers Mukto-Mona which publishes regular articles in English and Bangla. The slain blogger and founder of Mukta-Mona Dr. Avijit Roy published a book in Bangladesh on homosexuality, the first of its kind, which attempted to provide a scientific view and accessible description of homosexuality on several grounds.

Last September, the country's first-ever lesbian comic character Dhee was launched. The BoB events drew some crowd and was mostly networked through Facebook.

It's ok to be different. Join us on 9th April for a for an awareness event. https://t.co/ICYeIzy0jA#relation #BOB pic.twitter.com/S6abnTHyAO

However, after the arrests many of their social media pages became inaccessible, most probably taken down.