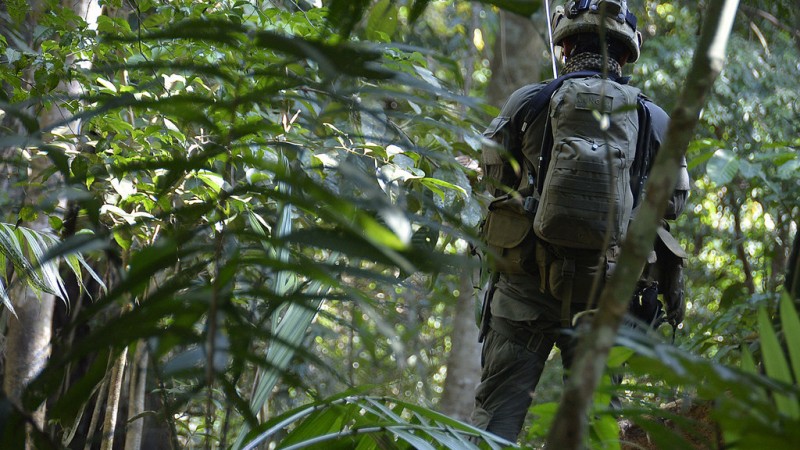 The armed strike by the Úsuga clan, also known as the Gaitanist Self-Defense Forces of Colombia, kept many zones in the north of Colombia in suspense and created questions about the peace process developing in the country. Photograph from the Flickr account of the ‘Policía nacional de los colombianos’, published under the  Creative Commons licence (CC BY-SA 2.0)

Beginning on the evening of Wednesday, 30 March, different areas in the north of Colombia saw their streets gradually empty of people, while transportation and businesses cut their working hours short. All of this was due to the self-proclaimed Gaitanist Self-Defense Forces of Colombia (also known as the Úsuga Clan), which ordered a strike starting at midnight on 31 March and lasting until midnight on 1 April.

The reasons for the forced strike (also called an “armed strike”) were not very clear. Commemoration for the death of one of their leaders, as claimed in their pamphlets? Revenge for the military offensive against them? To force peace talks with the government by intensifying armed actions like the guerrillas did in the past? Support for the anti-government protest planned for the next day throughout the country by the right-wing Democratic Center political party, lead by ex-President Álvaro Uribe?

What is certain is that the strike generated fear within the population. Historically, strikes imposed by militias in Colombia have meant illegal roadblocks, armed confrontations and retaliation against businesses and transportation services that disobey the order to suspend all activities.

Since its formation around 2007, the Úsuga Clan has tried to bill itself as a self-defense force against other guerrillas operating in the area. But the Clan is well known for being involved in the drug trade, moving tons of cocaine with nearly 2,000 armed men at its disposal; it is widely considered the most dangerous criminal organization in the country.

Many suspect the group wants to be recognized as a self-defense force to benefit from the eased penalties that such militias enjoy under Colombian law. Fighting between leftist guerrillas, right-wing paramilitary groups and agents of the state has plagued Colombia with deadly violence over the last 50 years, and that special legal treatment is meant to promote the demobilization of the insurgency. Although the Clan is not considered a player in the conflict, it seems as if the group could move to the top of the pecking order of armed factions if a peace agreement is achieved between insurgent forces FARC and ELN and the Colombian government. 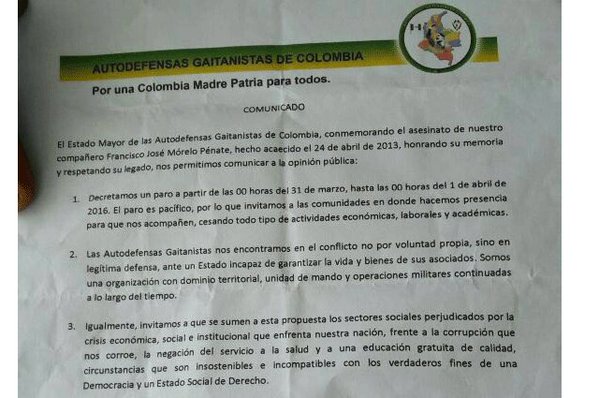 Photograph of the comuniqué distributed to the population in the north of Colombia. In the comuniqué, the group maintains that the strike is peaceful, that it is a protest in an armed conflict in which they never chose to participate and they invite the public [who have been] “harmed by the economic crisis” to join in. Image shared on social networks.

As a result of the Clan's strike threats, 39 municipalities in eight departments in the north of the country were paralyzed. Social media carried the largest quantity of information about the strike, with reports coming from both residents and the Clan itself.

#ArmedStrike Even in San Pelayo echos of the frightening pamphlets have arrived and this is what the capital of the “porro” [a traditional music genre] looks like.

The strike saw at least 27 violent incidents, including the murder of four civilians and one member of security forces. Different acts of intimidation were also reported, including messages sent on social media which sought to extend the strike to at least three capital cities and ten more municipalities.

The reaction of the government was limited to patrolling some critical places and to urge the public to disobey the strike. Isolated and without the ability to leave their homes, social media became the method that many citizens used to take stock of the situation. This was the case with Global Voices contributor and co-author of this post, Cati Restrepo. She detailed her experience of the armed strike on Facebook, expressing concern for the rural population who are the first to feel the consequences of armed movements:

I'm experiencing, first-hand, an armed strike. Throughout the day, I saw how people and the town itself came to standstill; cars stopped going out, there were no motorcycle taxis and absolutely all businesses closed down.

By midday I can't find provisions to eat at night, in fact we have to share with someone who couldn't get any at all. There are no transportation services running to or from the municipality where I am. The solitude in the streets speaks for itself and nobody knows what waits for us tomorrow.

But the worst was yet to come:

Only a few meters away they murdered a worker at a gas station, a truck that was carrying food was burnt, transportation services are still at a standstill and businesses are still closed (some are opening in the mornings but close their doors shortly thereafter).

As the hours passed, the situation grew worse. Those affected became the only consistent means of finding out what was happening in the north of the country.

From the department of Antioquia, Margarita Rodríguez tweeted:

@GobAntioquia @ViceColombia send reinforcements to Tarazá and Caucasia. To all of Bajo Cauca. We are kidnapped!

Gustavo Santiago compared the armed strike to a curfew and published the following video:

It isn't a dry law, it isn't a curfew, it is an illegal #ArmedStrike that is making Montería be like this. This is one of the main streets.

The public also turned to mobile phone messaging apps to express their confusion, desperation and impotence. Green Party congresswoman Angélica Lozano published a chat between a user in Apartadó and another in Bogotá. In the conversation, a couple complains how information about the armed strike was absent from mainstream news.:

Tweet: Chat from someone who is in Apartadó and her boyfriend in Bogota about the #ArmedStrike

Image: -How are things going?
-Not really good. And supposedly, things won't go back to normal until Saturday.
-Seriously?
-That's how it is.
-They said that or what?
-Burnt buses, dead people and too many things that you can't even begin to understand. That's not making the news on TV. It's the information circulating on mobile phones. Things are really bad.

Under the hashtags #ParoArmado (#ArmedStrike) and #NoSonBacrimSonParas (#They're not “criminal gangs“, they're paramilitaries), Colombians discussed the strike, shared videos and photos, and accused the government and political parties of inaction.

Citizen media like the Agencia Red Nudo de Paramillo, which brings together nine regional media collectives, published on-the-ground footage of the communities of Zaragoza and Tierralta on Facebook.

At the same time, photos were published of the abuses committed by the Úsuga Clan:

Far-flung communities weren't the only ones to suffer the effects of the strike. In Medellín, in the Belén Rincón neighborhood of commune 16 (zones made up of various neighborhoods), pamphlets, graffiti and a burnt-out bus forced citizens to return to their homes.

This is how Medellín is suffering from the paramilitary #ArmedStrike. A burnt-out bus in Belén

Unfortunately, while the country waits for the outcome of peace talks with FARC and ELN guerrillas, which would put an end to half a century of armed conflict, the success of the Úsuga Clan's armed strike has reignited fears about the revival of paramilitarism and filled Colombians with questions about the future. Pessimism and polarization seem to reign on social media in Colombia:

Let's leave aside the euphemisms, [ex-President of Colombia] Uribe's so-called peace was a failure. Or a strategy to retake power?

Paramilitaries are still active and today they are a threat to the peace process.

Once the strike ended, the combined efforts of the military and the police allowed for the capture of 59 members of the Úsuga Clan and the rescue of 33 people who had been kidnapped at illegal roadblocks, according to a statement by the president of the republic. The fight will continue until the group's network is dismantled, the president assured.