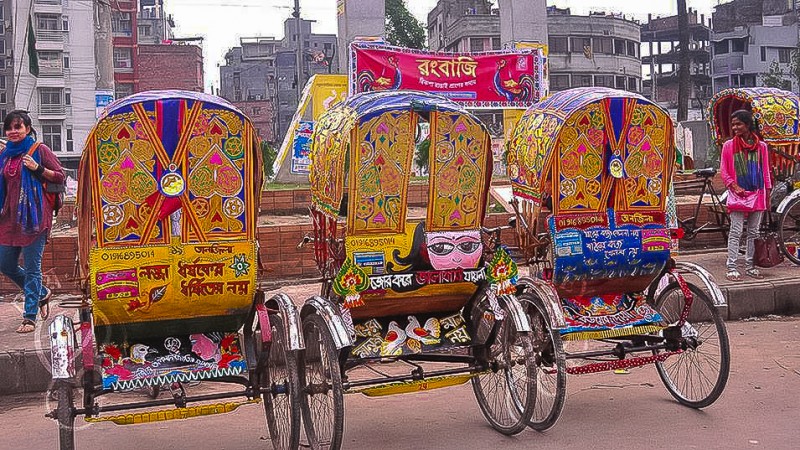 Rickshaw painting with protest slogans by the participants of the event “Rongbaji”. Photo by Sabrina Aman Reevy. Used with permission

Three-wheeled rickshaws, one of the trademarks of the Bangladesh capital Dhaka, are famous for their colourful, brightly painted exteriors. These vehicles have been in use since the 1940s, and the artworks adorning them can depict everything from movie stars, flowers or religious imagery.

At the beginning of April, group of about 50 women in Bangladesh used rickshaw painting as a way to protest against violence against women and other injustices that they face. The event was organised by Meye (Bangla for “girl”), a non-profit, women-led network of Bangla-speaking women which advocates women's rights, empowerment and leadership. Founded in 2011, Meye has created a community of about 5,000 women to date, mostly connected via social media.

In Bangladesh in recent years, there has been a worrying increase in the number of rape cases. When women do become victims of rape, they are often shamed and their modesty questioned. Street harassment of women also is commonplace. At home, as many as 87% of currently married women reported experiencing violence from their husband, including psychological violence, according to a 2011 survey by the Bangladeshi government. 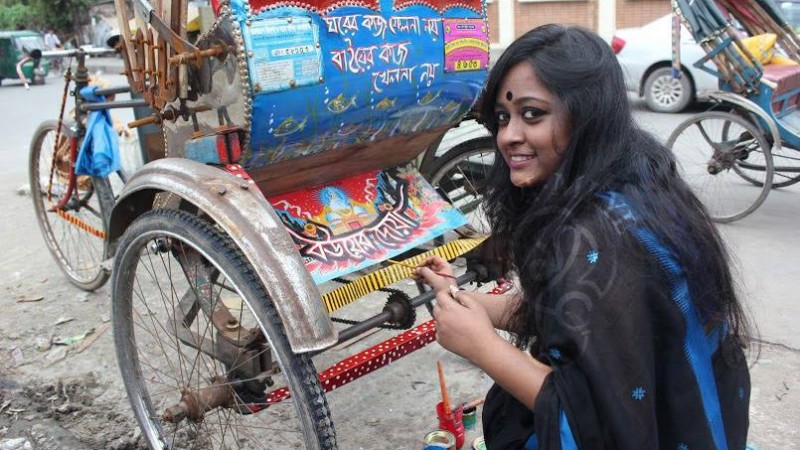 Message at the bottom: বউয়ের দোয়া” (Bouer Doa – Prayers of my wife), a spinoff from the usual message found in the back of the rickshaws – “মায়ের দোয়া” (Mayer Doa – My mother's prayer) – emphasising the wife's contribution in a patriarchal society. Photo by Navida Ameen Nizhu. Used with permission.

Global Voices spoke to Trishia Nashtaran, a blogger and founder/coordinator of Meye, about the innovative protest.

Trishia Nashtaran (TN): None of us have forgotten the sexual assaults carried out against women on Pahela Baishakh (Bangla New Year celebrations) last year. Meye has responded to the violence then through ‘Arek Boishakh: A protest through celebration’ – urging women to once again reclaim the Dhaka University campus through colors, words and music.

This year, Meye welcomed the new year with a unique initiative they have named ‘Rongbaji’. Under the theme of ‘Let our words color rickshaws’, on the 1st of April, women voiced their protest through rickshaw paint at Nimtoli Gate, next to Bangladesh Asiatic Society. Before Bangla year 1423 arrives, the song in our hearts and the color in our souls took shape into words and images by adorning rickshaws — a transport that symbolizes the spirit of Dhaka. People of all gender were invited to lend a hand; because as we unite in celebration, we must also stand together when it’s time to protest an injustice. 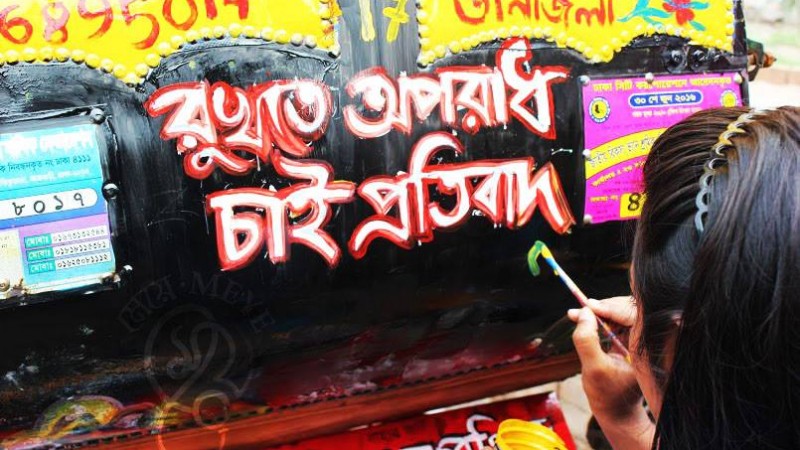 “We have to protest to stop the crimes.” Photo: Navida Ameen Nizhu. Used with permission

GV: Why did you chose rickshaw painting?

TN: Because, rickshaws are an integral component of our city lives. The images painted on rickshaws have always been a colorful reflection of the historical, cultural, social issues of our times. 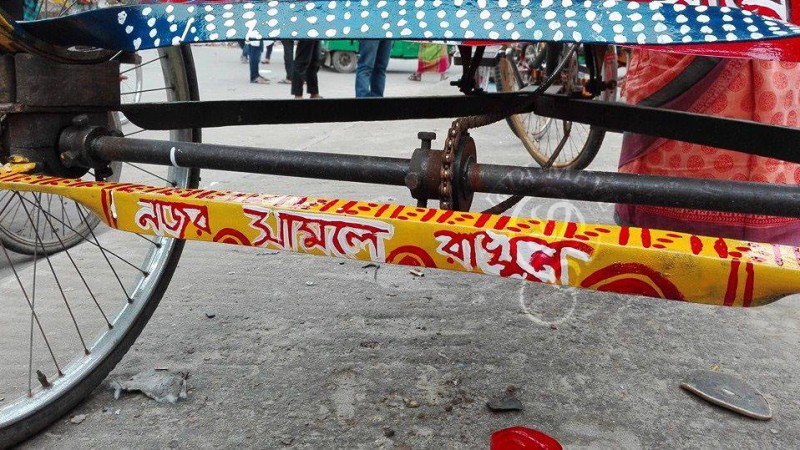 GV: What does “Rongbaji”, the title of the event, mean?

TN: The literal meaning of the word “Rongbaji” is playing with colors. In colloquial language, “rongbaj” is a word referred to spoilt brats who would stand on roadside and catcall women. The name was chosen for the rickshaw painting event for both the literal meaning and the colloquial one for the sarcastic tone it bears. 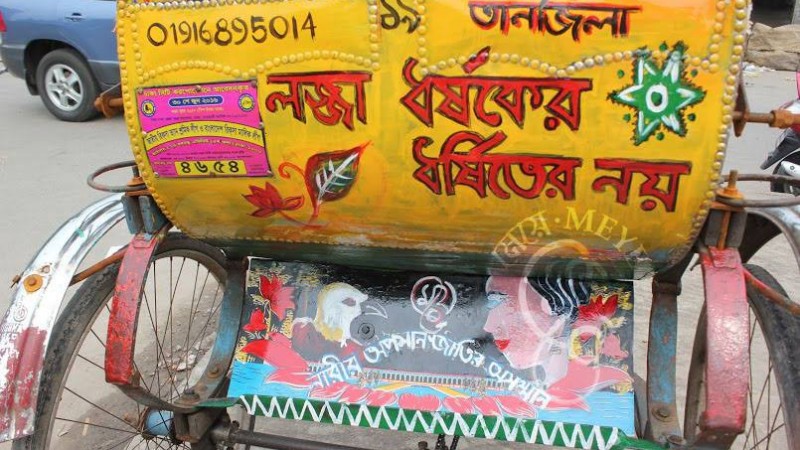 1) “The shame is for the rapist not the victim.” 2) “If you insult a woman, you insult the nation.” Image by Navida Ameen Nizhu. Used with permission.

GV: What are you trying to achieve?

TN: We hope that the tradition of depicting messages of women in rickshaws we have started will be carried forward by the brilliant rickshaw painters (known in colloquial language as artist man) who help make our Dhaka rickshaws so very beautiful with their colorful strokes. Through the moving wheels of the rickshaws, our slogans will keep going forward and telling our stories throughout Dhaka. Some other organizations have already been planning to spread their protest in this way. We hope that words will thus roam around places and find their ways into people’s thought, leading us to a better tomorrow. 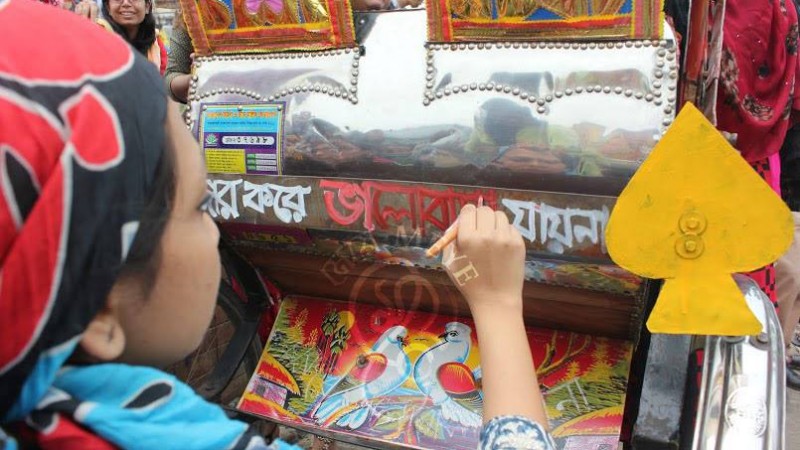 “You cannot love without consent.” Photo by Navida Ameen Nizhu. Used with permission. 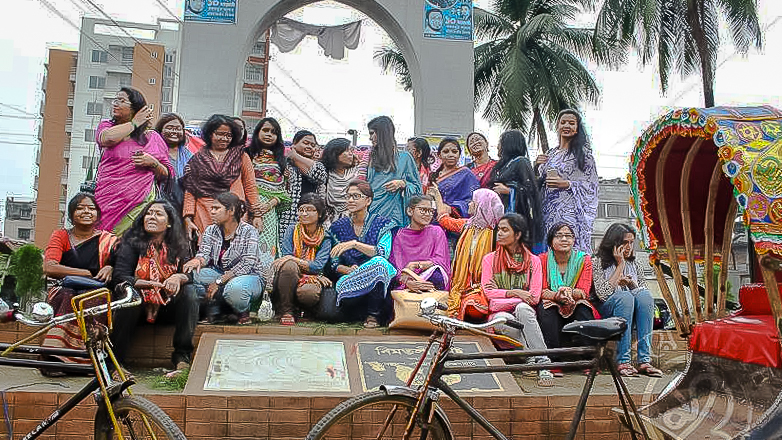 Some of the participants at the event. Photo: Navida Ameen Nizhu. Used with permission.