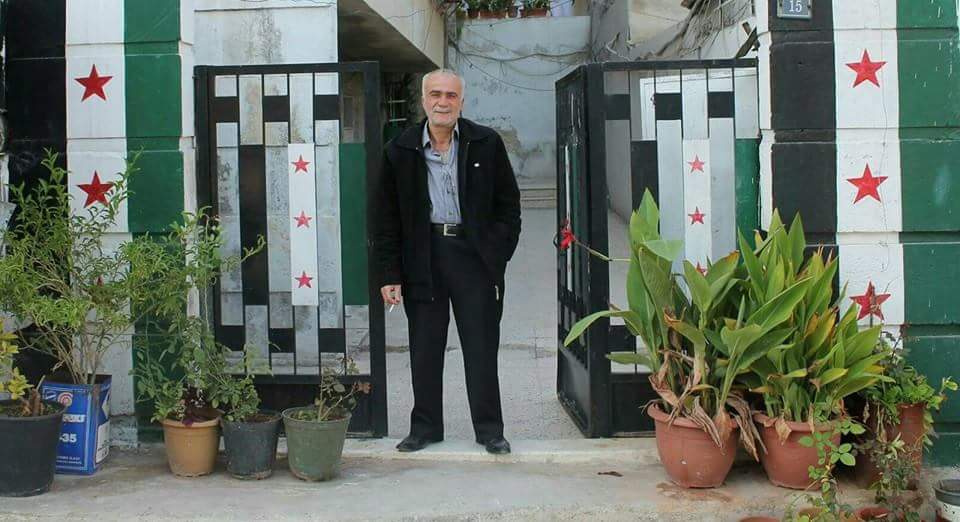 Abu Majid Karaman at his home in Aleppo. “I walked along the side of house where he had painted the fence with revolutionary flags. The main gate was also painted in revolutionary colours, indicating the extent to which he was attached to this revolution.” Photo from his daughter's Facebook page.

He watched as we approached his house. Sitting on a green plastic chair, he gazed at us as we got out of the cars. We were eight. He knew some of us, but not others, including me, but he knew very well that he was the one we were all there to see. As we approached he stood up and said in a loud, unshaken voice: “If you’re here to offer me condolences, go back to where you came from. But if you’re here to congratulate me then please come in and make yourself at home.”

Uncle Abu Majid Karaman shocked me with both his words and his strength. Abu Majid had lost two family members on the battlefields, the last of which was Oubada Abullaith, his son-in-law, a military leader in the Thowar Al Sham battalion, which fights under the Free Syrian Army. Oubada was martyred in a battle in Aleppo. Months before that Abu Majid’s son, Majid Karaman, was killed leading another battalion under the Free Syrian Army.

Despite all this loss, Abu Majid refused to accept any condolences for their deaths. “No condolences should be given over martyrs,” he said, “for we follow in their footsteps.”

His words were steadfast and powerful. The eyes of this 50-year-old man spoke even before his mouth did, sparkling with power, especially when he talked about the fundamentals of the revolution. The wrinkles on his face and his white beard spoke of his experience of life.

We talked about the battles in Aleppo, both the city and the rural parts, and he talked military tactics with the experience of a military officer. He was particularly interested in the welfare of civilians. Whenever we mentioned a region or an area, he would tell us the size of the civilian population there and the degree of danger they would face in the event that battles reached them.

The state of the city of Aleppo then was similar to what it is today. Part of the city is under the control of the Assad regime: the army and the militias of the National Defence Forces known as Shabbiha are holed up there. Another part is outside the control of the regime: that’s where the Free Syrian Army, the opposition’s military battalions, reside, as well as some Jihadi battalions and few civilians who have refused to leave their homes despite the daily shelling. Uncle Abu Majid and his family were among the latter. When I asked him about his reasons for staying, he recited a verse from Q’uran, “You will only get what God has decided for you.” He continued: “How can I leave my house? How can I leave the mattress on which the martyrs of my family once slept? Those martyrs left us, that’s true, but they entrusted this to us, and we should honour that.”

I shivered, listening to him. He spoke with a revolutionary fervour the likes of which I’d never heard before. He is the person who led the peaceful protests back in the days when protesters were defying the regime under its own rule. Back in the days when the activists of Aleppo distributed revolutionary pamphlets in neighbourhoods that supported the regime to try and open their eyes and sell them on the revolution. Abu Majid was also a member of all the revolutionary councils, and he was close with all journalists and activists in Aleppo. He enjoyed the love and respect of most of the Free Syrian Army fighters.

I walked along the side of house where he had painted the fence with revolutionary flags. The main gate was also painted in revolutionary colours, indicating the extent to which he was attached to this revolution. Uncle Abu Majid called me in to join them again. I went back in and found homemade sweets and coffee. He said: “Eat the sweets to celebrate the martyr. Eat the sweets to celebrate the groom.” I was at total loss. I didn’t know whether to hold the sweets or hold back my tears.

This visit took place last Ramadan. I decided to spend that month inside Syria after having left the country earlier to settle in Turkey. Despite being Christian, and despite the warnings I received about going there, I felt that I was among friends and family. I felt embraced by a revolution that doesn’t differentiate Muslim from Christian.

Abu Majid was kidnapped some time ago. He was put into a car which all eyewitnesses confirmed belonged to the al-Nusra Front (the al-Qaeda branch in the Levant). Nusra has denied having anything to do with the matter, or holding Abu Majid captive.

Asaad Hanna is a Syrian journalist and activist.