The Naked Truth About Censorship In Uzbekistan 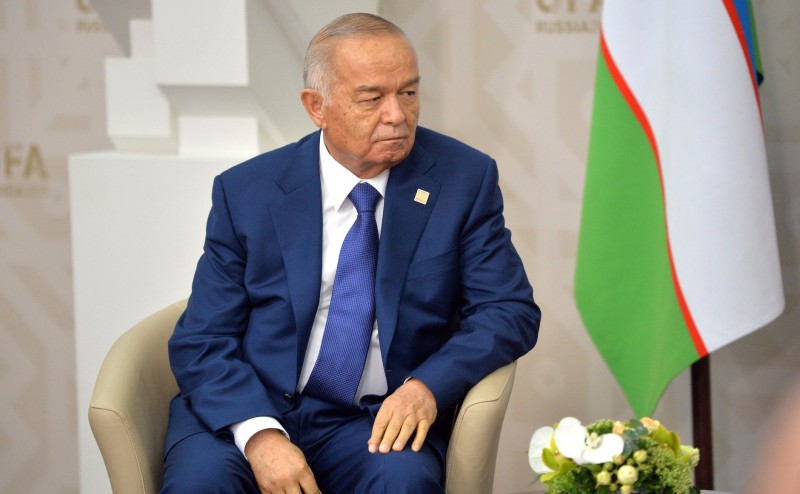 Islam Karimov, Uzbekistan's 78-year-old president, has been in power for over a quarter of a century. Wiki image.

Censorship was a key instrument for controlling the masses during Soviet times. These days Uzbekistan's ageing President Islam Karimov — who served as the First Secretary of Soviet Uzbekistan's Communist Party before independence — regularly rages against anything and everything connected to the old Union.

Nevertheless, the system he has fashioned in the Central Asian country of 30 million remains remarkably similar to the one it emerged from in 1991.

Currently Uzbekistan censors everything from televised and online content through to guides published by international organisations for students that are looking to hold and participate in debating competitions.

Film in Uzbekistan is regulated by the state agency Uzbekkino. The agency recently published a list of over 700 films, many of them foreign, that had been banned for ‘eroticism’ or ‘indecency’.

That vice, viewed by the government as a threat to Uzbek values, is invoked with similar enthusiasm by Uzbeknavo, which controls the licenses for pop musicians in the country of 30 million people.

Recent times have seen a number of cases wherein women pop stars in particular have been effectively ostracized for donning “indecent” clothes and promoting values perceived as alien to the Uzbek people.

This January the government introduced regulations forcing artists to submit quarterly reports on their activities, almost a year after Deputy Prime Minister Elmira Basitkhanova announced the landlocked country was “not Robinson [Crusoe's] island” or “a democracy, where people can do whatever they want”.

Basitkhanova's comments were seen at the time as ushering in a new period of increased state control over the arts, and so it has proved.

In February 2015, two famous artists Rayhon and Lola Yuldasheva appeared on stage together for a duet that saw them cast provocative glances at one another and hold hands.

The performance stoked an uproar from conservatives, with a number of websites and newpapers publishing columns criticizing the performance as promoting same-sex sexual relationships.

A month later the agency drew up rules that forbid stars from donning dresses that revealed bare shoulders and legs, according to the Uzbek service of RFE/RL. 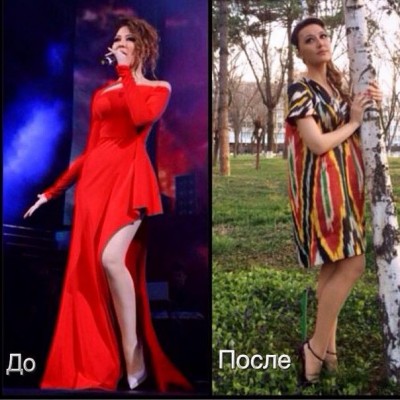 Lola Yuldasheva before and after the ban. Image widely shared.

Given the pair's dance was fairly ordinary-looking by the standards of Western pop, it is no surprise that another popular singer Tamila lost her performing license shortly after a video seemingly of the star baring her bottom on camera appeared on the Telegram messenger service widely used in Uzbekistan on January 28 this year.

This was the second time Uzbeknavo had revoked Tamila's license in the space of a year. In fact, her license had only been re-activated in November after the agency suspended it in the summer of 2015 for her piercing her nose.

Summing up widely-held public sentiment towards the clip apparently filmed by an unknown male, one internet user blasted:

Uzbeknavo (locally Ozbeknavo) remonstrates with Tamilla in a widely shared cartoon that also appeared on the website of RFE/RL's Uzbek service.

Others, including her colleagues in the Uzbek pop world, were more supportive, however.

Russian website Lenta.ru, quoted the head of the licensing department at Uzbeknavo Odil Abdukahhorov as saying the regulator would “categorically forbid” Lola Yuldasheva and other Uzbek artists that had pledged support for Tamila from taking part in a meeting defending her.

The planned meeting did not go ahead.

Under President Karimov, now 78, Uzbekistan has trodden a line between what it views as the danger of growing Islamic observance — Uzbekistan is widely cited as one of the world's worst religious freedom offenders — and what local officials view as Western culture's immorality.

The result has been a deep-seated conservatism mostly lacking religious overtones and a state-led cultural protectionism that sets tight boundaries when it comes to defining what it means to be Uzbek.

In an article on growing ‘fashion censorship’ in Uzbekistan, Silk Road Reporters noted that members of the state Uzbek Women's Committee criticise women for wearing almost anything that isn't strictly ‘national’ clothing:

Most recently the country has made international news for banning the movie Deadpool from local cinemas.

In 2012, however, it created headlines by blocking Uzbek-language Wikipedia, which had more articles than the wikipedias in any of the other ex-Soviet Central Asian languages.

The decision to ban the online resource only in the country's state language — English, Russian and other language wikipedias remained available to local internet users — was curious, since much of the content blocked was innocuous, while more pernicious subject matter was still accessible in these other languages.

Nevertheless, writing on the Registan blog Sarah Kendzior had her own theory about the motivation for the block:

I have a suspicion that what prompted the Wikipedia ban at the end of January was the addition, on January 24, of the following entries: “seks”, “penis”, “gey”, and “jinsiy aloqa” (sexual relations), which come complete with helpful illustrations. This would be in keeping with the government’s aversion to overt sexual content, which they believe threatens national values […] Uzbekistan’s ban on Wikipedia has less to do with blocking access to information than it does with territorializing an ambiguous Uzbek ethnolinguistic virtual space.