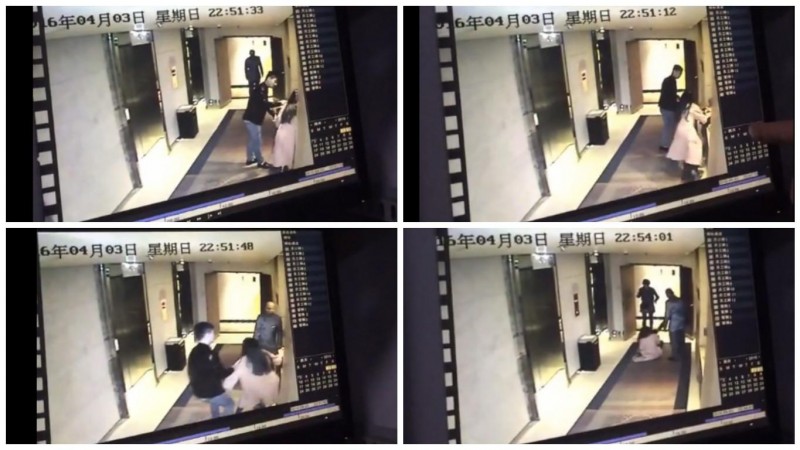 Instead of reporting on the Panama Papers, mainland Chinese media outlets turned a minor assault incident into a round-the-clock news story. Screen capture from CCTV video.

In China, an apparent assault on a woman in a Beijing hotel is driving an online conversation about gender-based violence in the country, and — much to the suspicion of many netizens — taking the air out of the debate surrounding the Panama Papers leak, which Chinese media has conspicuously ignored.

The incident took place in Heyi Hotel on April 3. As shown via the hotel's CCTV footage, a woman is attacked by an unidentified man and dragged around a hotel corridor in full view of bystanders, including hotel staff.

She howled for help but the hotel staff did nothing to stop the man. The woman eventually broke away with the help of a hotel guest and the suspect ran off.

The video was uploaded by the victim under a newly registered user account Wanwan_2016 on China's Twitter equivalent Weibo on April 5, the day after the leak of  was revealed.

The Panama Papers documents were leaked from Mossack Fonseca, a Panama-based law firm that helps clients set up offshore shell companies to stash their money abroad, sometimes to illegally hide their money from tax authorities at home.

Referenced among the 11.5 million documents that comprise the leak are relatives of three members of the Chinese Communist party’s elite ruling council, the politburo standing committee, including relatives of China's strongman President Xi Jinping.

Within one week, the hashtag “Girl attacked at Heyi Hotel” was viewed 2.6 billion times and generated 2.6 million online discussions. Predictably, netizens piled in to criticize the bystanders, the hotel management and the police.

Such intensive reporting on an everyday crime reminded many of attempts to divert the public conversation in China in the past.

Under comment threads of Headline News’ updates from the press conference, netizens braved the gauntlet of online censorship to remind other readers about news potentially more relevant to the public interest.

What about the incident that took place in Panama?

This event is a ploy, letting people forget something else.

It has successfully diverted the public’s attention from Panama.

This breaking news went viral after being reposted by many red-tainted commercial accounts and duly provoked public discussion. Is it intended to sidetrack attention from the incident in Panamaaaa [a typo to circumvent Weibo's hyper-sensitive word filter]? The people caught up in the scandal are important Chinese leaders, if the public ignores the event, then no further explanation is needed. That is upsetting.

Similar views were shared among netizens already in the know about the Panama Papers leak:

That’s the typical way to divert public attention. Obviously if the media is overwhelmingly reporting this news item, then people won’t focus on the 8NAMA [a typo to circumvent Weibo's hyper-sensitive word filter] incident.

The suspect that attacked the girl was captured on April 7, but local outlets are still following the case. Meanwhile, an apparent oath of silence is being observed across the Chinese media space regarding the Panama Papers.

According to a report by the International Consortium of Investigative Journalists (ICIJ), the other two members of the Chinese politburo other than Xi with links to the leak are Vice Premier Zhang Gaoli and party secretariat secretary Liu Yunshan.

So far there has been no official comment concerning top government officials’ links to the scandal. Foreign Minister Wang Yi said vaguely on April 8 that “explanations and clarifications” are needed regarding the Panama Papers, but even Wang Yi's comment was not picked up by mainland Chinese media outlets.