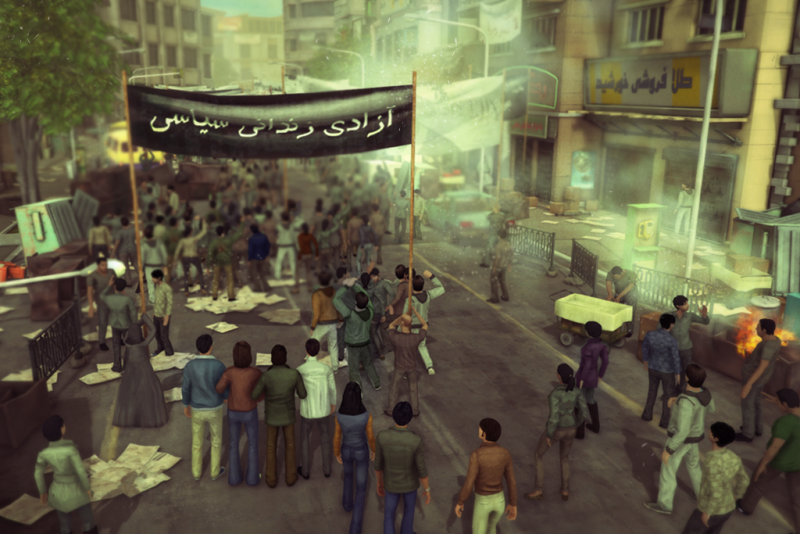 Screenshot from the game 1979 Revolution

Iran's 1979 revolution is now a game. Designer Navid Khonsari has combined the experiences of his own family with meticulous research to produce a choose-your-own-adventure game. Every choice you make takes you down a different narrative path.

Khonsari knows a thing or two about gaming. He worked on the wildly popular Grand Theft Auto series. This game is voiced by a few well-known actors and even includes his grandfather's home movie footage.

In an interview for Canadian broadcaster CBC, Khonsari recounted his own childhood memories of Iran's revolution.

I saw hope. I saw the possibility of change. I saw people coming together and embracing each other. Strangers.

A few months later he was hiding in the house as guns were shot into the air and violence became more prevalent.

US news outlet Fox News has already announced that the game “angers Tehran.” If that's the case, it might mean that Tehranis are lining up to play.

Khonsari plays this anger down. He feels that he's telling a story of people on a “journey of change” and not taking a political stance.

Global Voices: What was the spark behind the game?

Khonsari: The spark came from a trip I made to Iran. When I arrived in a small village in the South, I was approached by young Iranians who knew of me from my work on the Grand Theft Auto games. I was shocked by the huge cultural export and power of video games to communicate. These kids explained how they felt like they knew America based on their game experience. Their favorite activities included shopping, eating, working out, listening to music, going to clubs. They felt as though they had walked on American soil based on the experience in the game. It made me think, what if I created a game that exposed audiences to REAL EVENTS, and offered players the chance to put themselves into a world that is represented with historical integrity? What if I could give people both a very engaging and meaningful experience?

Making a game like this offers the opportunity to portray history not as black and white, but with shades of gray.  Having lived through the revolution the event seemed like the ideal first step in defining this new genre: Vérité Games.

Because 1978/79 in Iran was an active and wild time where ideas were clashing and the stakes were very high for everyone, it seemed like an amazing environment and thrilling climate to recreate for audiences.

Global Voices: Can you discuss the role of women in the game?

Khonsari: In researching and developing 1979 Revolution: Black Friday, it was important for us to not overlook the crucial role of woman who participated and made great sacrifices during the revolution — and also received the most collateral damage.  We interviewed a number of women who participated or were living in Tehran during the revolution. They came from varying religious ideologies and economic classes. We wanted to inform an authentic representation of all the characters in 1979 Revolution.

One of the main characters we've written into the game is Bibi Golestan.  As young engineer she witnessed great poverty and inequality in villages outside of Tehran. This motivated her to become an active leader within the Tudeh Party [Iran's communist party].  We also represent women in various other roles.  This includes Shirin Shirazi, the mother of main player protagonist Reza Shirazi. She bitterly watches the demise of her “way of life” during the revolution.  1979's characters reflect the complicated issues facing woman of varied classes and ideologies.

The game has just been made available on gaming store Steam, and social media users have been weighing in on the new release. Singapore-based gaming account @StoryConscious uploaded video of themselves trying to pick the spy out of the lineup in 1979 Revolution:

They also shared footage of the game play on YouTube:

Like many others, Arman Ghorbani was looking forward to learning more about the times his parents lived through.

My parents lived the #1979Revolution in #Iran and I've studied it deeply so I can't wait to experience @1979theGame. https://t.co/y040nvUI7k

While Kevin Miston was amused by a line spoken by one of the game's characters: “They call me Haj Agha.”