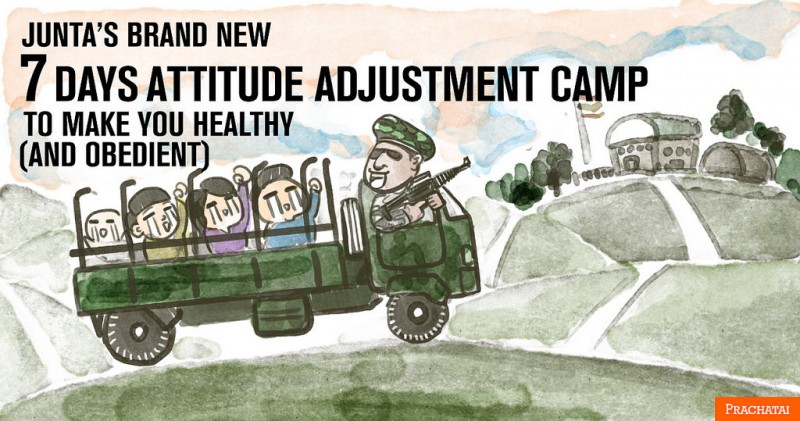 This edited article is from Prachatai, an independent news site in Thailand, and is republished on Global Voices as part of a content-sharing agreement. Since grabbing power in 2014, the army continues to rule Thailand. It has imposed strict controls on the media, public protests are banned, and an interim constitution it approved gave broad powers to the military. Those who criticize the military-backed government are ‘invited’ to undergo ‘attitude-adjustment’ sessions in army camps for several days.

Tired from work and a bad lifestyle? The Thai junta’s brand new attitude adjustment camp, aimed primarily at the country's civic and opposition leaders, will take you for a health check-up, “adjust” you to a new healthy lifestyle and, above all, help you achieve the type of attitude that complements the junta’s nation-building strategy.

The camp is available at your nearest military base.

The camp follows the “Training Curriculum for Leaders in Creative Nation-Building”, which is at least seven days long, depending on the ability of the trainee to adjust her or his attitude.

The daily activities involve waking up at 5 am, taking a bath, having a short break for leisure time, and working out in the morning.

Later, the trainees will attend lectures on the goals of the junta’s administration, followed by a “discussion session.”

In the evening, there will be recreational activities to reduce stress, and they will go to bed at 9.30 pm, said Gen. Piyapong Klinphan, the junta’s spokesperson and a supervisor of the project cited by the Thai News Agency

After finishing the camp sessions, instead of receiving a certificate, trainees have to sign a memorandum of understanding (MOU) stating that they will stop all political activities and stop instigating conflict.

Those who violate the MOU may be invited to take the course again.

Gen. Piyapong said that people that could be invited to the camp include those who criticize the junta in public forums and social media and who may be deemed threats to national security.

He added that the junta is monitoring groups of activists and considering whether or not they will be invited to take part in the course.

A health check-up will be provided to ensure the public that the trainees are treated well in the military camp, not beaten or tortured as media like to report.

The general added that the program is an attempt to build understanding with the dissidents, which will help the country “transit” to a “brighter future”. The junta, however, hopes that no one has to attend the course.

On Wednesday, April 7, Watana Muangsuk, a Pheu Thai (political party of ousted Prime Minister Thaksin Shinawatra) politician who has been taken to two attitude adjustment sessions in the past month, posted an article titled ‘Politician’s Indoctrination Session’, on his Facebook page.

Watana said that the course aims to silence voices against the referendum and the draft constitution. Some critics believe the proposed constitution would reinforce military rule in the country. Watana urges the junta to believe in people’s maturity and let the public have a free political discussion.

The upcoming charter referendum is very significant for the future of the country. To let the public freely discuss the content of the draft is the only way to ensure the quality of the referendum and acceptance from the people.