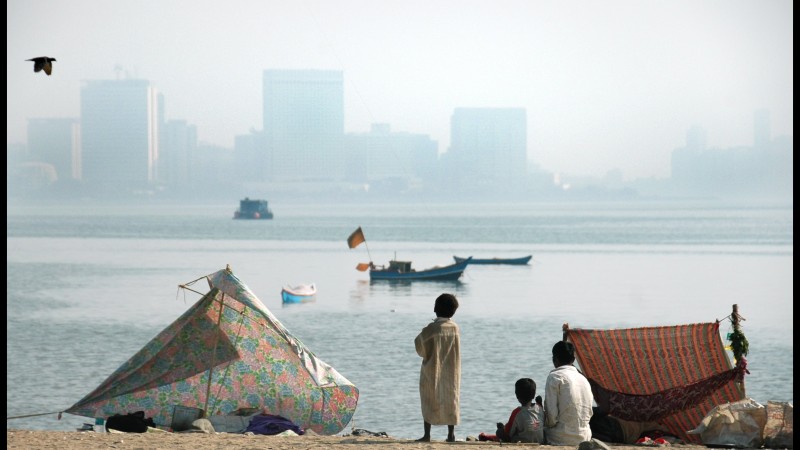 Chowpatty Beach, Mumbai, India. Looking out across the bay at some of the most expensive land in the world. PHOTO: Shreyans Bhansali (CC BY-NC-SA 2.0)

The noise surrounding the leak of a vast trove of documents highlighting the offshore financial activities of the rich and famous has put all other international news—including the deal on refugees struck between the European Union and Turkey—in the shade.

This is not surprising. After all, politicians, celebrities, drug dealers, sports stars and billionaires carry more weight with the global media than the poor and hungry—their scandals are deemed more newsworthy than the latter's suffering. But reading news about the Panama Papers leak and the aftermath of the agreement struck between Brussels and Ankara side by side is a useful exercise in understanding the depth of global inequality.

“. . . . reading news about the Panama Papers leak and the aftermath of the agreement struck between Brussels and Ankara side by side is a useful exercise in understanding the depth of global inequality.”

History will remember April 3, 2016 as the day the Panama Papers scandal broke. The 11.5 million records belonging to Panama law firm Mossack Fonseca were obtained by German newspaper Süddeutsche Zeitung and shared with the International Consortium of Investigative Journalists (ICIJ). A one-year investigation concluded by more than 370 journalists from 76 countries has revealed how some of the planet's most famous (and infamous) names used offshore companies in tax havens were to avoid tax, launder money and push through arms and drug deals.

BREAKING: The #PanamaPapers – Politicians, Criminals and the Rogue Industry That Hides Their Cash https://t.co/LDcslHoLAb

The following day, April 4, 2016, will be remembered as the day the EU-Turkey deal on migrants and refugees came into effect.

EU border agency Frontex informed the BBC that the first group of 136 migrants was successfully deported from Greece to Turkey under the controversial plan April 4.

The plan had been roundly criticized by international NGOs like Amnesty International and Human Rights Watch, who noted that Turkey was not a safe country for refugees. These prominent NGOs have claimed that Turkey is allegedly sending Syrians back to their conflict-ridden country.

The #PanamaPapers revealed Mossack Fonseca has at least 23 clients upon whom sanctions were imposed due to their support for regimes in North Korea, Zimbabwe, Russia, Iran, and Syria.

The leaked documents disclosed three companies that supplied fuel for the aerial campaign by the Syrian government that resulted in the deaths of thousands of its own citizens and drove thousands more to Europe's borders in desperation.

The investigations concluded by more than 370 journalists found companies registered in tax havens linked to the families or associates of world leaders like Russia's Vladimir Putin, Britain's David Cameron and Saudi Arabia's King Salman. This trio all made the decision to involve their countries in the Syrian War, while Riyadh and London have been at the heart of other conflicts in the Middle East that have precipitated the current humanitarian crisis.

The fact that the Panama Papers and the refugee deal stories arrived in the world's newsrooms and social media timelines in quick succession—with the Panama leak story quickly eclipsing the Turkey-EU Migrant deal—instantly set the stage for a debate about the unfair allocation of wealth.

According to documents belonging to Mossack Fonseca, King Salman used money from an offshore company in the British Virgin Islands to pay for a yacht capable of hosting 30 guests. Compare that to the Syrians who flee war only to face the risk of death once more in tiny, overloaded rubber dinghies headed for Europe's shores.

Or, moving away from politics, remember the feel-good story about footballer Lionel Messi sending a signed Argentina national team jersey to the Afghan boy who'd been previously photographed wearing a plastic-bag version of a shirt with the superstar's name and number in written in black marker? Does that story still feel good in light of revelations about what appears to be an elaborate tax evasion scheme set up on behalf of Messi, who earns $475,000 per week, and as the EU plans to return to Afghanistan 80,000 asylum seekers?

Deepening income and wealth inequality has played an undeniable role in driving both the moral crisis among the world's super-elite and the material crisis of the planet's most destitute. As Harvard University economist Richard B. Freeman has noted, “The triumph of globalization and market capitalism has improved living standards for billions while concentrating billions among the few.”

“. . . the point that shines through in the documents revealed by the ICIJ is the fact that doors were opened at every turn for wealthy criminals and politicians with corrupt connections—doors which are routinely slammed in the faces of refugees seeking a path out of war and destruction.”

According to Oxfam, since 2010, the world's richest have been able to increase their wealth out of all proportion to the slowing global economy, while the wealth of the world's bottom half has decreased by a trillion dollars. In 2016, the richest 1 percent control and enjoy more wealth than the rest of the whole world's population.

That situation grows more odious when it is revealed that people in the position to do something about the disparity, like UK Prime Minister David Cameron, Icelandic Prime Minister David Gunnlaugsson or the Head of Transparency International Chile, are only helping it grow.

These billions of dollars in evaded taxes indicated by the Panama Papers are not just a metaphor for inequality, they are its substance. This money could be converted into health, education and infrastructure resources, that if not preventing global poverty, could lessen its burden. As John Cassidy noted in the New Yorker, “…crony capitalism and tax evasion are huge problems for poor and middle-income countries: according to the International Monetary Fund, it costs them hundreds of billions of dollars in tax revenues each year. In detailing how this process works, the Panama Papers stories that have been released thus far have already performed an important public service.”

Offshore structures are nothing new and not necessarily anything illegal. But the point that shines through in the documents revealed by the ICIJ is the fact that doors were opened at every turn for wealthy criminals and politicians with corrupt connections—doors which are routinely slammed in the faces of refugees seeking a path out of war and destruction.

If we are ever to move beyond this contradiction that affects all of us, we need to come together to articulate our demands loudly and emphatically, through legal and democratic means. Think the protests currently driving political change in Iceland, but on a global scale.

The population of Iceland is only 330,000. Largest protest by percentage of population in history? #PanamaPapers https://t.co/C1jjsYQodp