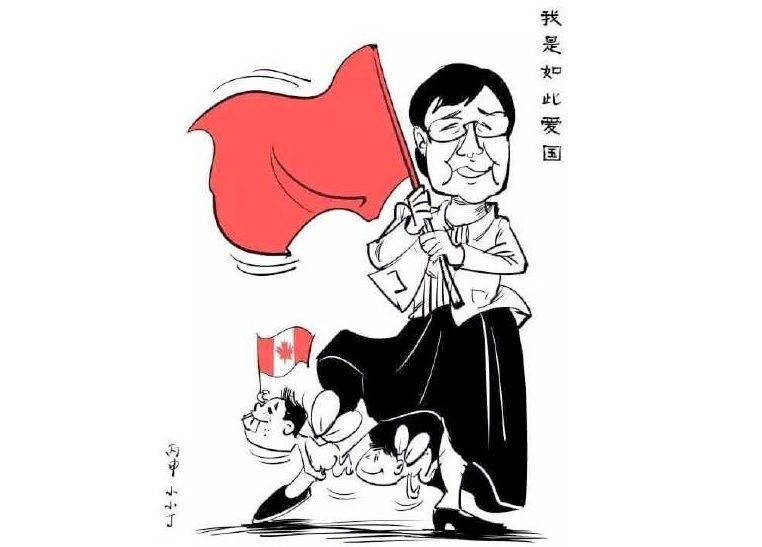 A caricature of Lin Yu Hong's love for China and her son circulated online.

A Chinese Communist Party bureaucrat has become a controversial figure on social media for advocating against the spread of western values in Chinese classrooms even though she herself sent her son to study aboard.

Lin Yu Hong, the deputy head of the Internet multimedia department of China's Communist Youth League, has been using her Weibo account @XiaoLin (@小蔺) to spread so-called positive energy online and attack voices that are critical of the Chinese government .

Last week, netizens digging through her Weibo archive discovered that she had sent her son to study in Canada. The post, written on 3 August 2012, said (screen capture via Weibo user @ShepherdAtEmperorCity:

In the airport. Just saw my son take off. Today, the little one went to study aboard in Canada alone. He waved his hand in a carefree manner and left. My tears kept falling but he looked the same, like the beginning of every other school term. I have no idea when we will see each other again.

Netizens also learned that before her son went aboard, he was studying in an expensive international school in China. In addition, two of her nephews are also studying in Canada.

After she became the target of scrutiny, Lin quickly deleted all the relevant posts, but netizens had screen-captured them and circulated them online.

The fact that her son went abroad for his education would be no big deal had Lin not been so judgmental of others for embracing western values or leaving China. Last year, she echoed the communist party's education policy on her Weibo (screen capture via online forum Sbanzu):

The head of the Education Bureau Yuan Guiren stressed yesterday that the management of educational material had to be reinforced. Educational material that spreads western values should be banned from entering the classroom; speeches that defame party leaders or deliver a negative image of society should not appear in class; speeches that violate the law and constitution cannot be spread; teachers would not be allowed to complain and express frustration and pass negative energy on to students.

Lin's perceived hypocrisy triggered a huge amount of responses from netizens. While some defended her, arguing that she is a good mother for loving her son more than the party, others blasted her for not practicing what she preaches. Though the majority of the hostile reactions she received have been scrubbed from Weibo, the following comment been reposted in many online forums (via online forum Club.China)

Hi, deputy department head Lin. I have three questions to ask you: 1. You sent your son to study in a capitalist country, have you lost the confidence in China's education? 2. How much does it cost to study in Canada? 3. Do you and your husband have extra income apart from your regular salary? Department head Lin, instead of labeling me as part of evil forces, can you respond to people's questions? We, the people, can report you on the Central Disciplinary Committee's web platform. Thank you for your attention.

As netizens tagged her over and over again in the line of questioning on Weibo, Lin was compelled to answer:

I have never stated that western educational material cannot enter the classroom. Bureau head Yuan said, “We shouldn't let educational material that spreads western value enter our classrooms.” The education quality overseas is higher and it is normal to send kids to study aboard. They learn the knowledge, not the values. When the time comes, they will return to the country (my son is currently studying in China). We have an old Beijing resident in the extended family and can simply sell an apartment for the kid to study aboard. Don't respond with envy and bitterness.

‘They talk about ideology but think about business’

Ja Ya, a current affairs observer, saw Lin as a typical figure in today's China. He examined Lin's social media profile, concluding that Lin had undergone a “radical change” in her online personality beginning in 2012:

Take a closer look into deputy department head Lin's Weibo account, and you'll see that 2012 was a watershed year. Before that, she was a ordinary woman, talking about the daily life of a mother, having hotpot, talking about football, her son, complaining about Beijing's traffic, Air China's service. She followed Big V [those with verified accounts] and public intellectuals like Lee Kaifu, Deng Fei. She enjoy a peaceful and stable life.

But after 2012, she has changed her writing style, became very aggressive. She has followed the tiny pinks [people who echo the party line] and started mimicking them, launching “collective attacks” against some specific targets […]

The year 2012 marked the full transition of power from former Chinese President Hu Jintao to current leader Xi Jinping, who views ideological battle as one of the most important ways the Chinese Communist Party can hold on to power. In the past two years, Lin has joined several attacks against online celebrities, including a nail technician named Luo Yufeng who tried hard to make her way to New York. Lin suggested that Luo had relied on someone else to buy her ticket (subtly implying that she was a sex worker).

Lin also called on web censors to take a closer look at online video celebrity Xiao Papi, who mixes different Chinese dialects in her online show; Lin accused her of spreading vulgar content. Most recently, she attacked Christoph Rehage, a German living in China, for criticizing his country of residence over a vaccine scandal in which doses of outdated or improperly stored vaccines were given; Lin told him to leave China and go home.

Ja Ya argued that Lin's change in attitude was indicative of the times and that she is not alone:

Many people have gone through this. To put it simply, they just want to make a living. Within the establishment, there are those who act like ancient poet Tao Yuanming and refuse to bow for a living. However, nowadays, so many people see “patriotism” as a business and as a path to get a promotion. They talk about ideology but think about business. They are smart or too smart […]

I believe that deputy department head Lin loves the country. And I believe that she loves her children more. Which love is more real, according to my observation, when one has children, they learn what is “real love” — they would give the best to the person they really love. As parents, they would try their best to give their children the best, in particular the best education […]

According to the logic that “a mother would give the best to her kids”, we can say that for deputy department head Lin, Canada, a country where western values are widely spread, has better education than China or she would not have let her kid take the risk of being poisoned by western values and send him abroad. Like her, I would not be worried about her son being polluted. They have grown up and know how to distinguish what smells good and what stinks. […] Some criticized her for having a “split character”. But I would not attack this good mother because I believe that when a mother's love for her kid is in conflict with other love, she would ignore the latter.