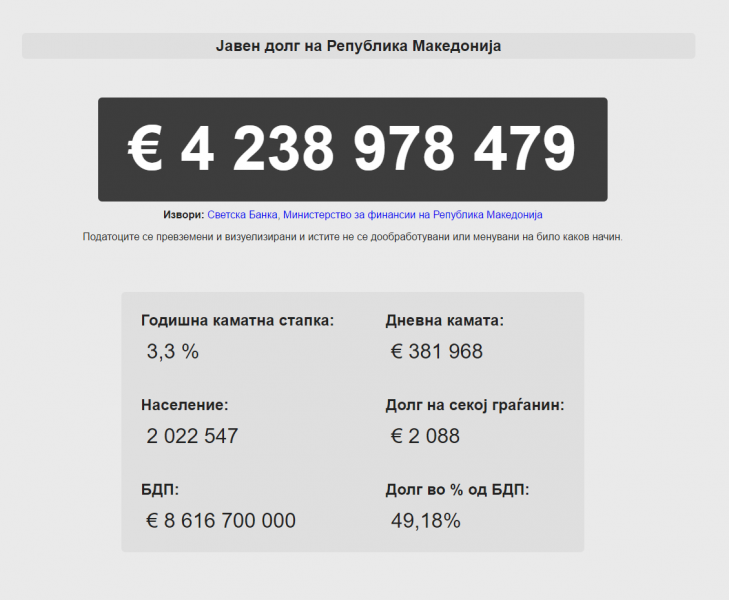 The Macedonian Academy of Arts and Sciences, the highest academic and artistic institution in the country, removed their web application monitoring public debt only a few days after its publication, following a tongue-lashing from the ruling party, VMRO-DPMNE.

On March 14, 2016, the Macedonian Academy of Arts and Sciences (MANU) published its Public Debt Counter displaying in real time the amount of Macedonian public debt — over 4.23 billion euros, based on data from the World Bank and the Ministry of Finance. Besides the total debt, the app displayed annual interest rate (3.3%), and data such as daily interest (381,968 euros), average debt of every citizen (2,088 euros) and that the debt amounts to 49.18% of the gross domestic product (GDP).

Independent media outlets and many social media users praised the counter as a step forward for the institution, which has been quiet about many pressing issues affecting the country over the last 10 years.

However, the next day VMRO-DPMNE issued a statement against MANU, particularly targeting its president, renowned economist Taki Fiti. The party statement questioned his credibility and accused him of fraternizing with the opposition and “Soros” — referring to business mogul George Soros, who is chairman of Open Society Foundations, one of Global Voices’ sponsors.

It also declared that MANU's publishing of the counter was “a political act” and criticized that the application showed the absolute debt in euros (although debt relative to GDP was included too): “Every economics student knows that the debt must be measured in relative value, not absolute, but clearly such facts are a mystery for the former unsuccessful finance minister Taki Fiti…”

Within hours of issuing the statement, MANU took the application down, though at the moment of writing this article, Google Cache preserves a copy of the page.

Ad hominem attacks on Fiti continued for several days. MANU issued a response blaming an employee for publishing the app on their own without prior permission:

[The counter] was prepared within the MANU Center for Computer Sciences and IT for the needs of their research, and was published by an associate of the center without informing MANU management and the center manager beforehand.

The counter, therefore, does not reflect the official position of MANU.

The academy and each of its members remain open to informing the public about their work.

As a member of the Open Government Partnership, Macedonia has pledged “to continuously improve itself on the foundations of open, transparent, reliable and efficient government institutions that communicate and cooperate with the citizens.” However, open data initiatives often face obstacles from institutions when dealing with taboo topics, which might affect the image of economic prosperity promoted by the ruling party.

A contentious redefinition of public debt

The issue of public debt in Macedonia, one of Europe's poorest countries, is a touchy one. Many Macedonians are not happy with their government's spending priorities, considering the quality of public services to be sub-par, especially in the health sector.

Meanwhile, millions are pumped into projects whose public utility is debatable. For example, in the capital city Skopje, the government has built sailing ship-shaped buildings (even though has never been navigable, and the closest sea is over 240 kilometers away) and a Ferris wheel, among 136 different buildings and monuments erected as part of a controversial beautification project launched in 2010. The construction has cost 634 million euros, which the country's taxpayers have been paying, according to the the Balkan Investigative Reporters Network.

Electricity in some schools has been shut down because they could not pay for it…
Woohoo! Oh joy! They'll going to build a Ferris wheel!

Has this driven those in power to reconsider what programs receive funding? Not quite. Instead, Macedonia's parliament voted in an urgent session on July 23, 2014, to change the definition of public debt in the country. Therefore, several forms of what was until then considered public debt, such as debt from municipalities and public enterprises owned by the state, are not considered as such anymore, unless the state itself is a guarantor of said debt.

At the time, Twitter user @EStavrevska bluntly expressed her indignation:

They'll redefine the public debt in order to make it seem lower. The next thing I expect from them is to change the definition of idiots, by excluding themselves from it.

Another issue is that of foreign financing. Government critics, including the opposition, but also analysts and bloggers, have expressed concern that many of the government's costly endeavors are increasingly financed by foreign loans, which are counted in the revised public debt definition.

After 2009, the government ceased publishing a range of data crucial to the development of the country, including the size of the public debt — alongside making the effort in 2014 to change the definition. The political opposition has warned that if things don't change, Macedonia risks going the crippling economic way of Greece.