In Jamaica’s Televised School Quiz, Adults Were the Sore Losers 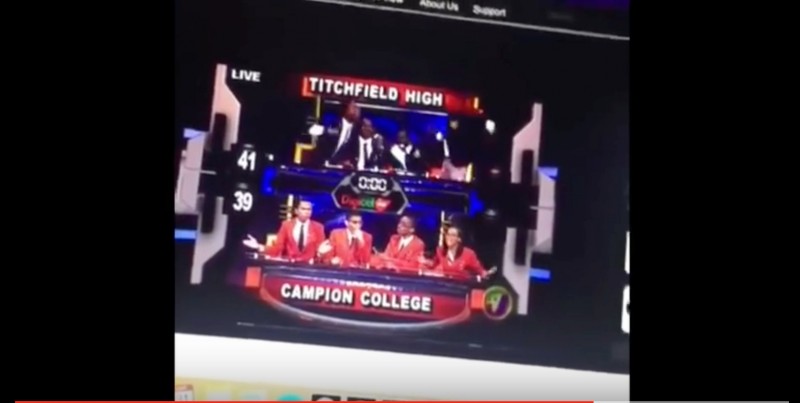 The Schools Challenge Quiz, an annual series broadcast by Television Jamaica just before its prime time newscast, is a 47-year-old national institution. It is always a closely watched event with high viewership. This year's competition among Jamaican high school teams has been fraught with controversy with complaints flying, legal action taken, and insults traded among supporters on social media.

The 30-minute competition includes a “speed challenge” when each team has the chance to answer as many questions as possible in three separate 60-second periods, and a “buzzer challenge,” where the first team to press a buzzer answers the question — but can lose points if they answer wrongly. This final section has caused many dramatic reversals of fortune for teams in the past. It is a knockout competition, with the winning teams advancing to the next round.

The problems began on March 16, when Television Jamaica aired the match between two Kingston schools (reigning champions Ardenne High and Camperdown High), which ended in a win for Camperdown by a two-point margin, moving the school into the quarterfinal. However, after the show was aired, Television Jamaica recognized a scoring error on its part involving a buzzer question, which would have resulted in a draw but was not immediately corrected on the show.

The television station therefore organized a replay (an unusual occurrence), which Ardenne won. Camperdown immediately sought an injunction to halt the current season until the issue was resolved, which the Supreme Court refused, ordering the school to pay damages to Television Jamaica.

We were the underdogs, it was a classic tale of ‘David and Goliath’ gone wrong and the whole situation opened up a Pandora’s Box, which has been years in the making.

Later that week, former President of the Kingston College (“KC”) Old Boys’ Association, Ambassador Stephen Vasciannie, wrote to the television station's general manager, complaining that the judges had incorrectly and unfairly deducted four points from his alma mater's team in another qualifying match. After the commercial break, the judges noted that after “careful review” the score was tied, with the tie-breaker resulting in a loss for KC. Television Jamaica responded to the complaint by saying that correct procedures had been followed.

On to the Grand Final on March 3, which was surrounded by glitzy publicity and heightened social media attention. Two well-known but highly contrasting institutions competed: Kingston's Campion College (regarded as a school for the academic elite) vs. the historic Titchfield High School, based in rural Port Antonio. As the show proceeded, the atmosphere among supporters and participants became extremely tense. A Titchfield team member's exhortation to his nervous colleagues to “settle, settle” — called “unprecedented” by quiz master John Paul Menou — resulted in five extra seconds being added to the Buzzer section.

After the double-checking of results, Titchfield won by just two points.

On resumption, Campion used the dying seconds to level the score, sending the match into sudden death extra time. However, Campion would lose two points after incorrectly answering the tie-breaking question and the Titchfield team went into uncontrollable cheers, setting off celebrations in Port Antonio.

Titchfield supporters — the school was runner-up in 2011, 2012 and 2013 — were ecstatic. One supporter on the SCQ Facebook page rejoiced:

oh Titchfield…we have FINALLY done it!!!! You have taught some of us the TRUE MEANING of PERSEVERANCE.That little country school on the hill, you have FINALLY made your mark!

Another tweeted from Portland:

Pt Antonio town square rocking… Can hear the music and I'm more than a mile away. Come celebrate with #Titchfield https://t.co/EPhNkkZv6C

A lack of good sportsmanship

As sometimes happens when young people compete, however, their adult supporters do not always behave in exemplary fashion. Comments on Twitter before, during and after the competition became heated. Jeers and insults flew among rival factions.

While barbs were thrown on both sides, one young commentator tweeted:

@Petchary @SH3DXZ there was intense vitriol against Campions participation in SCQ. Campionites got fed up and fired back.

As Campion supporters derided Titchfield graduates, suggesting they are only qualified to work as supermarket cashiers because of their inferior education, others questioned the organization of the show and in particular, alleged bias among the judges:

Titchfield opens the door for ‘country’ schools of the 21st century to win. @televisionjam you need to regain credibility. #SCQ2016

Who would have thought that an unfavourable end to a high-school competition would have coalesced so many of Jamaica's brightest minds and stirred up such venom in people? The situations in question seem to have escalated to a level not even the intervention of the Dispute Resolution Foundation can help…Not winning, in any competitive arena, can perhaps be one of the biggest teaching moments for our young people. As adults, we have a responsibility to teach them to lose graciously, and that the end result isn't the only thing that matters.

Were the shoe on the other foot (as it has been in the past), and Campion suffered an unfair defeat, my argument would be exactly the same. Dear complainers and protesters, feel proud that your teams did their best when representing your schools. Congratulate and console them and keep it moving. We don't always get our way. Welcome to life.

Jamaicans have a strong sense of “old school” loyalty, expressed in many ways (including the just-concluded Boys and Girls Champs “Champs” athletics competitions). While generally good-humored and harmless, the rivalries occasionally show a glimpse of a Jamaica divided by class, status and the gap between rural and urban Jamaica that is less palatable. Educator Damien Williams tweeted:

This yr's #SCQ2016 revealed much about class, privilege & stereotypes & the awkward moments created by intersection pic.twitter.com/P6gJUDMJ8x

@damani @Petchary respect all schools, respect all jobs. Classism is distasteful. I simply don't care what circumstances are.

It seems there are many lessons to be learned, on all sides, before the 2017 season of the quiz begins.