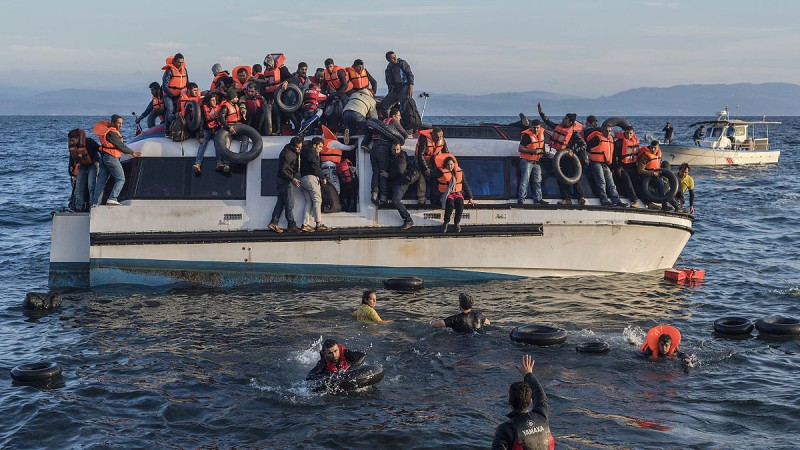 Syrian and Iraqi immigrants getting off a boat from Turkey on the Greek island of Lesbos. Photo: Wikimedia Commons, (CC-BY-SA 4.0)

This is an edited version of a post originally written in Portuguese.

A controversial agreement between the European Union and Turkey to send asylum seekers of all nationalities except Syrian to Turkey came into force on Monday, 4 April.

As part of the deal, the EU will also take in one Syrian refugee from the 2.7 million living in Turkish camps for each refugee they send back. Turkey will receive billions in aid and its citizens will be able to enter and travel visa-free around the Schengen Zone — an area comprising 26 European countries that don't have border controls between them —  in exchange.

The deal also speeds up the process allowing Turkey to join the European Union. It's meant to help manage the tide of people fleeing war and insecurity for the relative safety of Europe but this has been much criticized by human rights groups.

Monday saw the first deportations. A video posted to Facebook by user Benjamín Julian showed refugees being shuttled from Chios, Greece, on a Turkish boat while a few people shout “freedom”.

Today starts one of the most shameful acts of European Union diplomacy. […] Refugees of war are again named illegal migrants, and the EU paid Greece to deport them to Turkey, away from EU border. [Turkish President] Erdogan, on the other hand, will take charge, also with the European money, to return these refugees back to Syria. Today, the first shipment takes off with condemned people. We must hold those who return these people fleeing from battle back to battle responsible. And the media is now entertained with the Panama Papers scandal, this will be relegated to backstage. Let's keep an eye on the newspapers.

Throughout the negotiations, which began on 7 March 2016, people spoke out against the proposal. The agreement, discussed in the European Council between 17 and 18 March with Turkey, was considered by the High Commission of the United Nations for Refugees (UNHCR) and by humanitarian organizations as “violating international rights”.

Amnesty International called it “inhumane, cruel, and immoral” because it concerned “human beings and not merchandise.” The London-based human rights organization declared that Turkey “has not been a safe country for refugees” and criticized that the country “illegally detains and assaults refugees, shoots at Syrians who try to cross the border and has conducted forced returns of asylum seekers”.

#EUTurkey agreement equates refugees to merchandise. We have 2 days to #StopTheDeal. Take action!

According to Oxfam, almost 60 million people are currently “displaced” from their homes and lands, “the largest number in memory recorded by the United Nations since the Second World War. Almost half a million came to Europe last year, but the large majority remains close to their countries of origin”. Oxfam also added that Lebanon, with a population of 4.5 million, is one of the most challenged nations, hosting 1.2 million refugees from its neighbour Syria.

In Portugal, Amnesty International asked Portuguese people to appeal to Portugal's National Commission for Human Rights and urge the government to say no to the agreement using Twitter and Facebook with the hashtag #StopTheDeal.

A petition to say “NO” to this agreement was created on Change.org, which attracted 73,802 signatures. One person who signed from Portugal wrote:

It's time to stop this! We should make the difference for these innocent people.

Despite the public outcry, the deal with Turkey went ahead. On 19 March, the EU released the outcome of the agreement which settles on nine points, the last of which reads, “The EU and Turkey will work to improve humanitarian conditions inside Syria.”