In February 2012, five women strolled into the Cathedral of Christ the Savior of the Russian Orthodox Church in Moscow, donned colorful balaclavas, and then recorded themselves jumping and flailing around. The group later added what it called music to the video, putting the final touch on what would lead to Russia’s infamous Pussy Riot case, in which three of the band’s members were sentenced to prison for a religious hate crime.

The women of Pussy Riot have been free for more than two years now, but they might soon get some company in the annals of Russia’s crimes against religiosity. This time, however, Christianity is absent, the perpetrator is a freestyle wrestler from the predominantly Muslim Republic of Dagestan, and the angry victims are the Republic of Kalmykia’s 107,000 Buddhists.

The scandal [1] that could send a 22-year-old Dagestani man to prison for three years began innocently enough: his wrestling team was visiting Elista, Kalmykia’s capital, to attend (but not participate in [2]) a wrestling tournament. Late on Saturday, April 2, after a night of merrymaking, the young man and his friends found themselves at a Buddhist temple. After relieving himself inside the temple, the man decided to show off his high-kicking skills, asking his companions to film him delivering his foot to the mouth and nose of a gigantic Buddha statue. They agreed, he performed the feat, and they recorded it, even broadcasting it on Periscope, Twitter’s live-streaming video service. Then they went back to their hotel.

Criminal charges for desecrating a Buddha statue in Kalmykia

Hours later, in the middle of the night, the team awoke to the shouting of an angry mob. It turns out that the video of Buddha being kicked in the face was a viral hit, and it didn’t take long for the Buddhists of Kalmykia to catch wind of the stunt.

Flanked by police, the wrestler addressed the crowd, claiming that he didn’t know he was in a Buddhist temple when he filmed the video. Unfortunately for him, this only further provoked his audience, which eventually pressured him into dropping to his knees and apologizing to Buddha. (There’s footage from outside the hotel available on YouTube. It’s in Russian, but the anger in the crowd’s voices is still plenty palpable without a lick of Russian fluency.)

As the mob gathered and grumbled outside the wrestlers’ hotel, local officials scrambled into action. Soon, Alexey Orlov, the head of the Republic of Kalmykia, and Abdusamad Gamidov, Dagestan’s prime minister, released a joint statement (immediately republished on YouTube) where the two reiterated the brotherly and respectful ties between Kalmykia and Dagestan. Gamidov announced that the wrestling team’s coach had been fired, and the wrestling tournament itself had been canceled, with all Dagestani and Chechen players returning home. The recorded announcement [8], which features two men standing awkwardly side-by-side taking turns speaking for five minutes, has more than 75,000 views at the time of this writing. 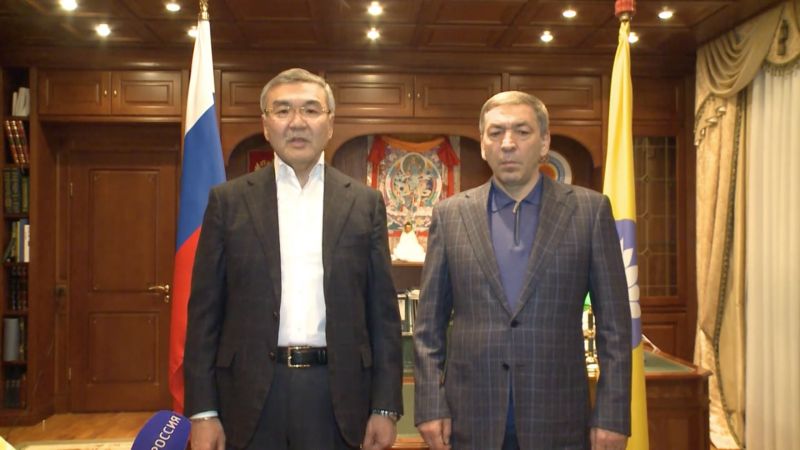 Alexey Orlov, the head of the Republic of Kalmykia, and Abdusamad Gamidov, Dagestan’s prime minister, remind everyone how friendly they can be. Image: YouTube

Orlov revealed that the wrestler who high-kicked Buddha is now in police custody, facing criminal charges for acts showing “clear and obvious disrespect for society and intent to offend religious believers’ feelings.” Because the act was committed in a temple, the maximum penalty rises from one year in prison to three years. The applicable law in this case, according to Orlov, was signed [9] by Putin in June 2013, in the afterman of the Pussy Riot trial (though the punk rockers managed to get three years behind bars, before lawmakers ever cooked up legal protections for “believers’ feelings”).