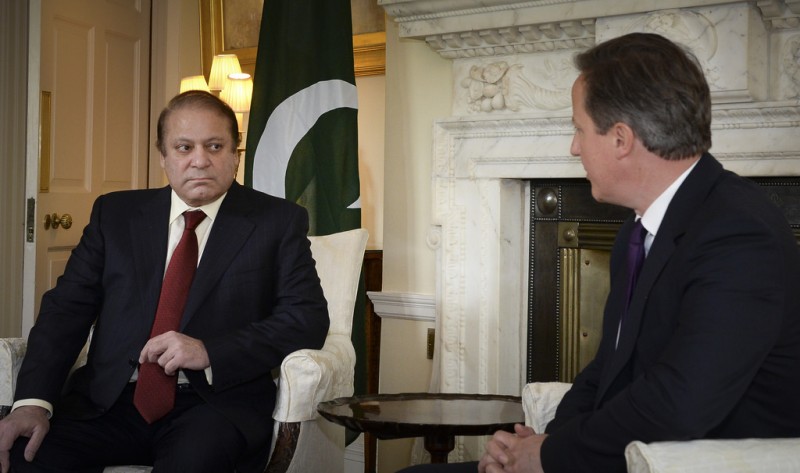 Nawaz Sharif, the prime minister of Pakistan, during a visit to Downing Street in April 2014. Photo from the Flickr account Number 10. CC BY-NC-ND 2.0

It was around 10 pm on a Sunday night in Pakistan when talk began on social media of an upcoming leak that would be massive and newsworthy. By midnight, the #PanamaPapers hashtag was all over social media, with hundreds and thousands of people reacting to what is now termed “one of the biggest leaks in journalistic history” revealing the shady offshore account dealings of many prominent world leaders, including Pakistan's Prime Minister Nawaz Sharif.

Offshore Power Players: See how Nawaz Sharif's relatives are linked 2the #panamapapers: https://t.co/JDeMk8kPet@PTIOfficial will love this

The massive cache of 11.5 million financial documents exposes the internal operations of one of the world’s leading firms in incorporation of offshore entities, Mossack Fonseca, headquartered in Panama. The trove contains over 40 years of records with data belonging to 140 politicians from 50 countries.

According to the documents, which were compiled by International Consortium of Investigative Journalists (ICIJ), the children of Prime Minster Sharif set up four offshore companies that owned at least six properties in the upmarket and posh neighborhood overlooking London's Hyde Park. The ICIJ report notes that:

Three children of former and current Pakistan's Prime Minister Nawaz Sharif – Mariam, Hasan and Hussain– were owners or had the right to authorise transactions for several companies… Hasan Nawaz Sharif was the sole director of Hangon Property Holdings Limited incorporated in the British Virgin Islands in February 2007, which acquired Liberia-based firm Cascon Holdings Establishment Limited for about $11.2 million in August 2007. Mossack Fonseca resigned as agent for Hangon because Hasan Nawaz Sharif was a “Politically Exposed Person.”

The Sharif family denied to comment when approached by ICIJ. However, on a TV show that aired on 19 March, the prime minister's son Hussain Nawaz admitted to having off-shore companies as a matter of pride (“Allhamdullah” means “praise be to God” in Arabic):

And his sister Maryam Nawaz Sharif tweeted a press release saying that none of the corporations mentioned in the leaks are owned or operated by their father, the Prime Minister of Pakistan. She added that her brothers, mentioned in the leaks, were residents of Saudi Arabia and the UK and “neither is a tax-payer in Pakistan”:

Sharif family's official response to distortion of information given in Panama Leaks. pic.twitter.com/d84jfOsQz6

Pakistan, a developing country, relies on foreign financial aid to reach its poorest as the country lacks a social safety net system. A significant portion of the country's population lives in extreme poverty, but many of its politicians are notoriously wealthy. The documents reveal a much-known story of rich political elites who rarely feel the responsibility to be fully transparent and accountable to its people.

The leaks have been met with mixed reactions. Political workers from Imran Khan's opposition Pakistan Tehreek-e-Insaf (PTI) party consider this a validation of their demands, while others feel this may not lead to any fundamental change:

The frustration doesn't end. #panamapapers.
Denial will show our disinterest in the people and the future of #Pakistan

So serious question – where do we go from here? Like beyond the tweets and shouting matches on TV.. What now? #Pakistan #panamapapers

This would probably bring Nawaz Sharif into the top 100 richest individuals in Pakistan, maybe a bit below that too. A large portion of these holdings are illiquid (total cash in-hand and bank deposits combined for Nawaz Sharif and his wife are Rs 140 million) and constant industrial investments in Pakistan. The family is by no means poor, and neither have they ever claimed of being so.