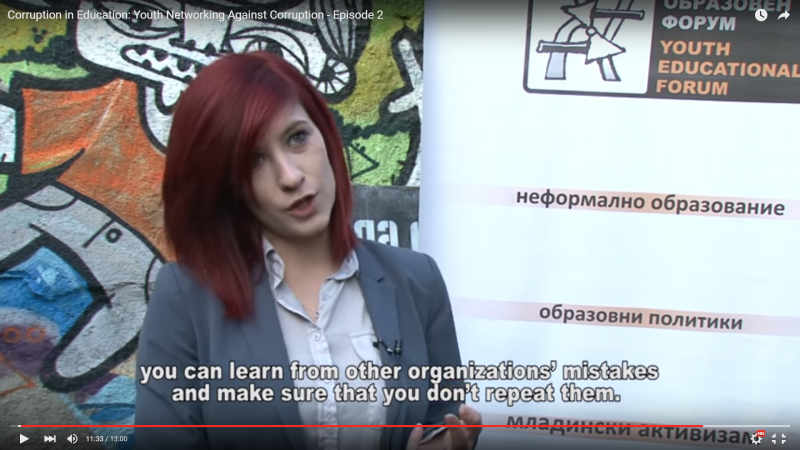 Dona Kosturanova explaining the benefits of networking of student organizations. Photo: Screenshot from the documentary “Youth Networking Against Corruption.”

A recently published documentary available in English and Macedonian shows how youth organizations from various countries can cooperate to try to put an end to the shady dealings that too often occur within educational institutions.

According to “Youth Networking Against Corruption,” the first step is to exchange experiences about the problems they face, ranging from widespread issues like cheating to country-specific challenges such as the unlivable conditions in Macedonian student dormitories.

The documentary also relates the introduction of codes of ethics in Macedonia, Armenia and Azerbaijan through the Transparent Education Network (TEN) as tools for dealing with corruption and promoting transparency. Including students in the creation of such codes proved instrumental in their implementation, as those who were supposed to apply them had a sense of ownership and awareness of their rights.

The importance of student participation in decision-making to keep educational institutions honest was recently highlighted in Georgia, where massive anti-corruption student protests erupted on March 10. The demonstration resulted in the withdrawal of the lead (and only) candidate for the chancellor of Tbilisi State University student government four days later. The candidate, Giorgi Gaprindashvili, was a member of the student government when it was found to be embezzling funds.