Does Azerbaijan's Ruling Family Feature in the #PanamaPapers Leak? Of Course it Does! 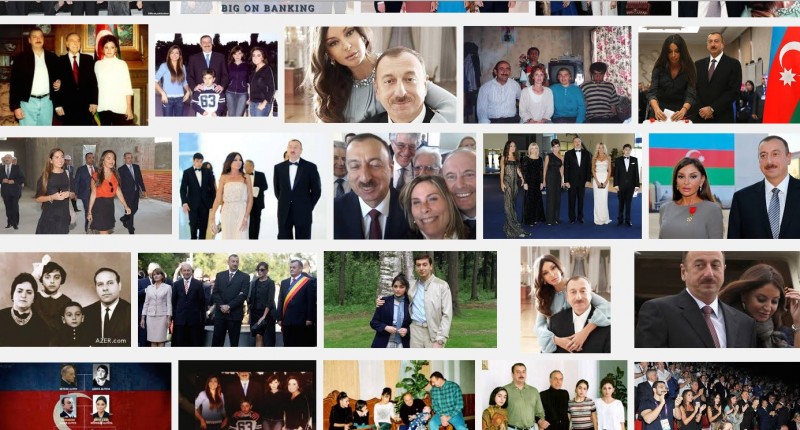 Family moments: Googling the Aliyevs links you to any number of articles sharing one central theme: corruption. (Google search).

The trending hashtag #PanamaPapers and the massive volume of documents associated with it is a non-seasonal gift for anti-corruption geeks that enjoy pouring over the exotic financial connections of the world's infamous and powerful.

Unsurprisingly ex-Soviet Azerbaijan's graftprone ruling Aliyev family features quite prominently in “an unprecedented investigation that reveals the offshore links of some of the globe’s most prominent figures.”

The leak affects clients of, and persons connected by paper trail to, the Panama-based offshore services firm Mossack Fonseca.

According to their proponents, the Panama Papers are “11.5 million leaked files to expose the offshore holdings of world political leaders, links to global scandals, and details of the hidden financial dealings of fraudsters, drug traffickers, billionaires, celebrities, sport stars and more.”

Now, like leaks before them, the Panama Papers are set to feed the global media machine for weeks, months and possibly longer.

The documents were initially received by the German newspaper Süddeutsche Zeitung and shared by the International Consortium of Investigative Journalists (ICIJ) with the Organized Crime and Corruption Reporting Project (OCCRP).

Azerbaijani President Ilham Aliyev's reputation for corruption goes before him.

In fact, he was celebrated in 2013 as the OCCRP's ‘Person of the Year‘. Unfortunately, this wooden spoon award did nothing to knock him or his closest relatives off track.

Members of the Aliyev dynasty in power in Azerbaijan since before independence who are mentioned in the Panama Papers leak include:

According to #PanamaPapers data mapped by the ICIJ, matriarch Mehriban took a leading role in one of the ownership schemes set up with Mossack Fonseca's help: 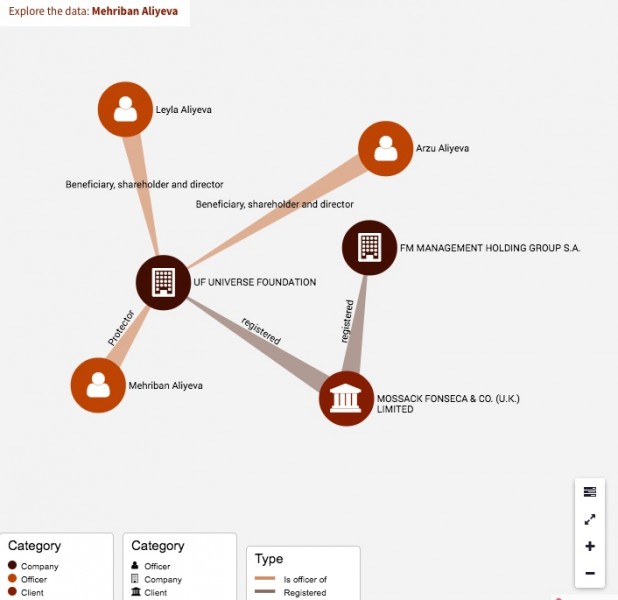 Image is a screenshot from icij.org, a panamapapers partner outlet.

In 2005, President Aliyev's wife, Mehriban Aliyeva, was named as one of two managers of the Panamanian UF Universe Foundation, incorporated in 2003. Under a complex proposal submitted to Mossack Fonseca in 2005, UF Universe Foundation would have ultimate control of AtaHolding, a major Azeri conglomerate. The 2005 proposal named President Aliyev's three children in addition to other senior members of Azerbaijan's tax office as beneficiaries. Two secretive companies central to this proposal were established through Mossack Fonseca although it is unclear whether or not the proposal was ever adopted. The UF Universe Foundation was inactivated in January 2007, but in January 2014, its representative asked Mossack Fonseca to reactivate it. In addition, Aliyev's daughters controlled a Panama-incorporated company and two others in the British Virgin Islands. The Panamanian company held a significant stake in a consortium of companies exploring goldfields in Azerbaijan. Aliyev's sister was the sole shareholder and owner of a BVI company registered in December 2005. Registration records list her at an address in a West London neighborhood where average home prices touch $9 million.

In light of these revelations, many have questioned the timing of a massive April 2 Azeri offensive on positions occupied by Armenian separatists in the Nagorno-Karabakh region the two countries contest:

#PanamaPapers , offshore, corruption and the #Aliyev family (what a convenient war in #Karabakh)#Azerbaijan https://t.co/GSY9G5BsBz

In reality, however, this latest leak would be unlikely to make a splash in the country, even if there wasn't a boiling conflict underway involving the national army.

After all, Azerbaijan is a republic where the corruption of the ruling family is assumed rather than challenged, and media freedoms are significantly suppressed by the authoritarian regime.

Indeed, for those that dare to attempt to dig up dirt at home, jail awaits.

Azerbaijan’s brightest investigative journalist Khadija Ismayilova did much to bring to light the “spheres of influence” and “dominance” of the Aliyevs in the national economy.

Ironically, it is Ismayilova who is now serving a seven-and-a-half-year sentence for “tax evasion” and “abuse of power”, the very charges she levelled at the entrenched regime.

Beyond the tangle of offshore companies linked to the family through the #PanamaPapers leak, the Aliyevs are known to be the owners of Azerbaijan’s largest mobile phone company, Azerfon, and key shareholders in the Silk Way Group, a state-endorsed “leader in the private sector of Azerbaijani economy” that controls 23 enterprises including the country’s airline company AZAL, Silkway travel, Silkway ground handling, the Duty Free stores at the Heydar Aliyev International Airport, Silkway Bank, Sky Catering, Sheraton Baku and other important entities.

Despite having oil wealth to burn the government has done little to address huge inequality and poverty in the country of 10 million, which increasingly appears to be a playground to indulge the hobbies of the family's various members.

Sports fan Heydar Aliyev, 18, for instance, is seen as the driving force behind the decision to host the Formula 1 European Grand Prix race, which will come to Baku for the first time in June.

The country has committed itself to a 10-year contract with the sport's main organising body and will have to pay a hefty fine if it fails to uphold its hosting obligations in the next five years.

Commenting on the suitability of Azerbaijan as a Grand Prix host journalist Kate Walker wrote that the plan appeared “somewhat misguided. The cost of hosting a grand prix runs to the tens of millions of dollars per annum, and that’s without considering the costs of erecting a street circuit on an annual basis. With only 9,500 hotel rooms in Baku, the capital offers limited accommodation for prospective tourists.”

Art is another key area of regime interest. Leaked US embassy cables from 2010 revealed that the powerful Pashayev family from which First Lady Mehriban hails controls the impressive Museum of Modern Art in Baku, while Aliyeva herself even wanted to build a Guggenheim museum along Baku’s waterfront.

Mercifully for the state budget, the project never went ahead.

The #PanamaPapers have huge stories to tell over the next two weeks of leak-related reporting, and citizens of the former Soviet Union will be paying close attention along with the global media scrum.

But for disillusioned Azerbaijanis already well-acquainted with the machinations of the Aliyevs, there is unlikely to be anything that shocks.