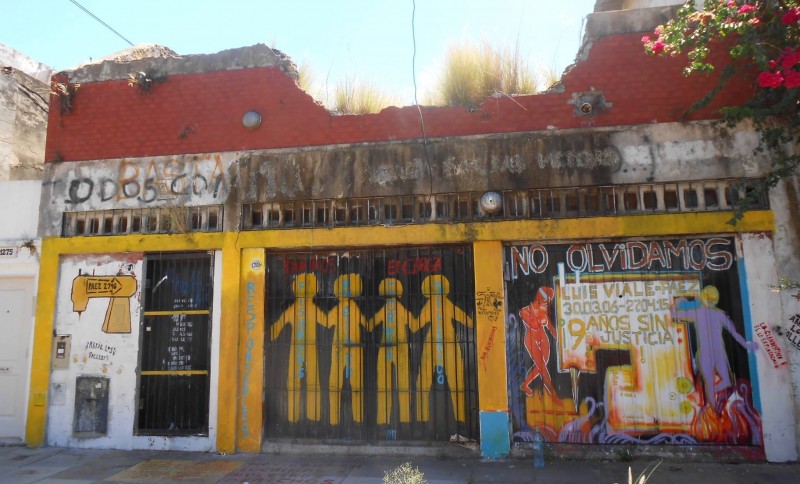 Front of the garment factory located on Luis Viale Street in Buenos Aires, Argentina. Picture used by permission from the #JuicioLuisViale Facebook Page.

Approximately 3,000 “clandestine” garment factories operate in the city of Buenos Aires, Argentina, according to the local non-governmental organization La Alameda. These illegal workshops are often set in residential communities, their facade barely providing any hint of the work being done behind closed doors. The conditions inside are often described as “slave-like” — workers, many of whom hail from neighboring countries such as Bolivia, are prohibited from leaving the factory where they work and live with their families. Since many workers are undocumented, they are always fearful of deportation and unable to protest the low wages, long hours, and poor treatment. These factories continue to operate because of its profitability for the brand owners and because of the ring of corruption involving inspectors, police, and other officials who turn a blind eye to the infractions. 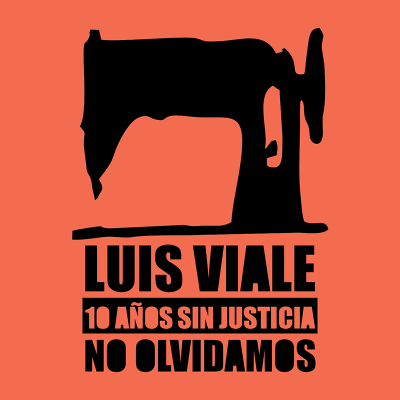 On March 30, 2006, a fire broke out in one of these sweatshops, located on Luis Viale Street in the neighborhood of Caballito. The blaze killed five children and one pregnant woman, all of whom were Bolivian immigrants. Faulty electrical wiring was to blame. There was only one exit through a stairway at the upstairs living quarters. Survivors said that the windows had iron bars on the outside and that it took firefighters nearly 45 minutes to arrive to the site of the fire. When the “rescuers” finally got there, the truck had no water. The fire went out on its own.

Ten years later, no one has been held accountable, and critics point to severe flaws in the Argentine justice system for the lack of redress. However, that may change — a trial to determine responsibility is due to begin on April 18, 2016.

According to survivors, the factory was located on the ground floor and the residents lived on the floor above in the apartment quarters. At the time of the fire, 64 people, including 38 children, had been living at the factory.

Only one bathroom worked and there was no hot water. The survivors reported that sometimes they needed to get in line at 3 am to take a shower, and they had to heat water in pots to bathe their children. The “bedrooms” measuring 3 x 2.5 meters were separated by sheets and wooden partitions. In many cases mattresses were shared among brothers, uncles, and nephews. […] Generally they worked 14 hours per day from Monday to Friday, and 5-6 hours on Saturday.

Community groups such as Simbiosis Cultural – primarily comprised of Bolivian youth who work or have worked in similar garment factories in the Greater Buenos Aires area — have tried to keep the tragedy in the public eye over the past 10 years.

In a series of audio podcasts, they offer background on the factory and interviews with survivors, who recount the events of the tragedy. They also document reactions after the fire and the subsequent marches, and reflect on how nothing has changed since that tragic day a decade ago. “Keeping the memory of the tragedy is a tool to fight for the future. We do not forget,” the podcast explains.

The group have also taken their protest to the site of the fire to raise awareness through interviews with witnesses, and to honor the victims.

In 2011, the situation caught the attention of then-Cardinal Jorge Bergoglio (now known as Pope Francis), who celebrated a Mass at the headquarters of La Alameda to denounce the practice of these clandestine garment factories and the corruption that enables this practice. He was reported to have said at the time:

I once said that they taught us in school that slavery had been abolished during the Assembly of the Year XIII, but that was false. In this Buenos Aires, so conceited, so prideful, there still are slaves, there still is slavery. Everything can be arranged by bribery, it is bribery of the soul, and bribery covers everything up.

Ahead of the trial, families and activists fighting for the rights of garment factories workers organized an online campaign simply titled #JuicioLuisViale (Luis Viale Trial) to inform the public about the case. Their outlets include a website, a Facebook Page, a Twitter account (@JuicioLuisViale) and a YouTube channel. A protest is also planned for March 30, the 10th anniversary of the fire.

On the Juicio Luis Viale website, the campaign explains why they use “clandestine garment factories”, even though they consider the term problematic:

Though the media has extensively called them “clandestine factories,” its use is problematic, since the pejorative sense of the word falls on the factory, or in other words, on the factory worker, freeing the “manufacturer” or the brands of all responsibility. In addition, such a designation encompasses the entire universe of garment factories — where internally there are a wide range of realities — including situations of human trafficking, forced labor, and other violations of labor and human rights. The factory workers who labor in these conditions are not at all free of responsibility, and in fact some of them are far from being small entrepreneurs. However, the pejorative stigmatization of all factory workers (including those under the moniker of “clandestine”) helps detach the brands from the problem.

[…] In this campaign, we decided to use the term “clandestine garment factories” for the simple reason that it helps to spread word about the problem by obtaining better results in the Internet searches.

Survivors and those fed up with the exploitative nature of these factories are eagerly anticipating the trial with the hope that it can bring justice for the six victims who perished 10 years ago.