Meet the Jamaican Entrepreneur Who Found a Way to Make ‘Going Green’ Fulfilling, Socially Responsible, and Even Profitable 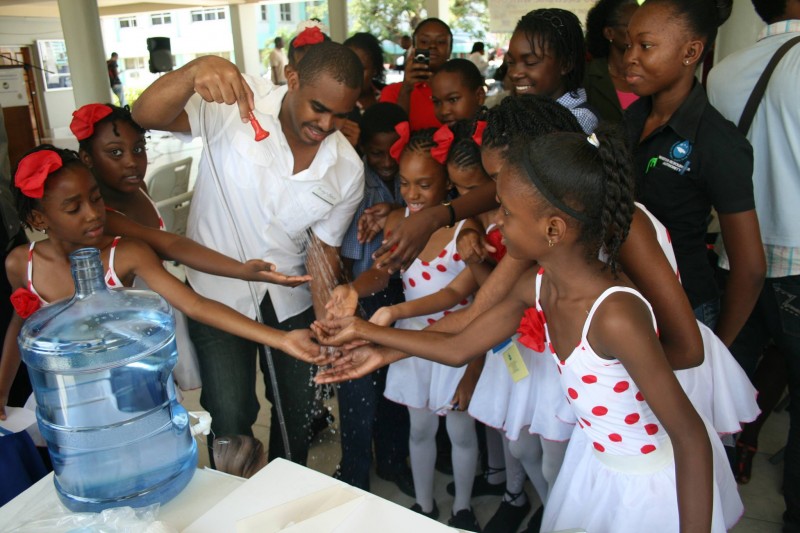 Jamaica is one of the most heavily indebted countries in the world, with 90 percent of its current energy needs dependent on imported petroleum. The country seems ripe for transition to a low carbon economy, but it's yet to be seen if the Jamaican private sector is ready to make that leap. Meanwhile, there is hope: innovators like Jovan Evans are paving the way and turning innovative eco-friendly ideas into products. Global Voices had the opportunity to speak with Evans to discuss his ideas, entrepreneurial spirit, and “going green” transition.

Global Voices (GV): Tell us a little about your background. How did your upbringing and education prepare you for entrepreneurship?

Jovan Evans (JE): In my younger years I would spend hours watching my grandfather, a retired engineer and farmer, build things — from bicycles to water pumping systems. He was one of those “Why buy when you can build” kind of men. Having people like that in your life reinforces the idea that man manipulates the environment and not the other way around. As a child, my favorite toys were Lego. Later, I abandoned it for a PC. Lego stimulates your imagination and confidence in your creative abilities. It is up there with reading books and playing musical instruments, in my view.

I went to Campion College, the best school in the Caribbean, where I met some really smart kids and excellent teachers. At the time, I think Campion was the only school where you had the option of building remote-controlled aeroplanes as an extracurricular activity through the Science Club. I guess that makes me a nerd! But apart from that, the standards of the school made mediocrity synonymous with failure. Having this in mind when developing products is an asset.

I graduated from the University of the West Indies with a B.Sc. in Computer Science and for ten years I worked in the IT sector. This was until January 2015, when I left the “nine-to-five” world to start my company, AquaFlow Products & Services Ltd. As an IT professional you are always solving problems, whether it's infrastructure acquisition and deployment or software implementation and development.

There are many things that contributed to my development as an entrepreneur, but the most notable to me are the skills I gained throughout the years working for and with others. Academia played a small role in my journey and I found training from entrepreneur-targeted workshops was more impactful. For example, expertise in procurement, graphics design, web-development and photography went a very long way. Believe it or not, I built software to manage the accounting and sales aspect of my business.

GV: What gave you the idea — and why did you see the need — for your Pump-N-Spray?

JE: Pump-N-Spray was born from frustration: the annoyance of bucket bathing every night because of water restrictions, a back-breaking chore I was introduced to on my grandfather’s farm decades prior. One day I forgot to catch my water, and that was the straw that “broke my back”. I originally sought to buy a solution but couldn’t find one, so this “camel” decided to build one. After six weeks I developed my first prototype. At that time, the pump-n-spray was just for myself. When the water situation was regularized I actually shelved it; but months later water restrictions were back and I was forced to use my Pump-N-Spray. It was then it dawned upon me that other persons were having the same challenge and that more than likely they would also be interested in my creation. Climate change indicates that water accessibility is not going to improve, so Pump-N-Spray was set to be a winner.

GV: Did you simply go it alone or did you have supporters and backers to get you started?

JE: I was alone in the product development process and financing for most of my journey; but I was fortunate to get into the Branson Centre of Entrepreneurship and that helped a lot with the business development. I recall the last day of my job of nine years was also the day I was accepted as an official Branson Centre Entrepreneur. For those who are unfamiliar with it, the Branson Centre ignites businesses to operate in a sustainable and socially responsible way to improve livelihoods and transform the world.

GV: Tell us about your partnership with Flint, Michigan. How did this come about?

JE: Essita Duncan, a lawyer from Washington, DC, started this initiative. I met her by chance at a Branson Centre-organized “meet and greet” in Montego Bay, Jamaica. She was part of a small audience with whom I shared my entrepreneurial journey. Weeks later, she made contact with me and introduced me to the water crisis in Flint and a non-profit she was a part of, Servants without Borders. They had heard the stories and visited the communities in Flint and were moved by the state of their water situation. We knew the Pump-N-Spray would have a positive and significant impact on the families in Flint — particularly on the children. A crowdfunding campaign was started and it has been well supported.

GV: What advice would you give to aspiring entrepreneurs, especially in the area of “green” products?

JE: Take a triple bottom-line approach to business. People, Planet, Profit. No matter how “green” your product is, your operations have to be sustainable and/or profitable. Always try and make people’s lives better with whatever you do and always listen to your customers. Try and partner with other entrepreneurs or institutions where possible. Together, everyone achieves more. Sometimes your products are more relevant to communities or countries [that are] not your own. Make a habit of looking outside of your “box”.

GV: Do you see yourself as a businessman? Do you intend to expand your product range to include other eco-friendly devices?

JE: I see myself more as an inventor than a businessman, even though those closer to me tend to say the opposite. I have three other innovations to patent. My most recent idea involves the recycling of greywater. 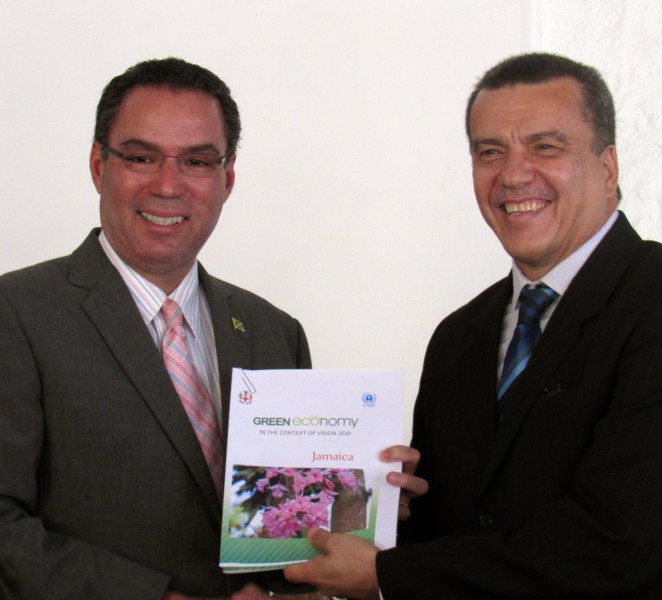 Left: Daryl Vaz, Jamaica's Minister Without Portfolio in the Ministry of Economic Growth and Job Creation (responsible for the environment and climate change), beside Leo Heileman of UNEP's Regional Office for Latin America and the Caribbean, receiving a copy of the EU-funded Green Economy Scoping Study for Jamaica. Photo courtesy Emma Lewis, used with permission.

GV: What are your thoughts on the possibilities for Jamaica as a “green economy”? How would you like to see it develop?

JE: I would say we are on our way. We have agencies keeping the private and public sectors “honest”, reducing environmental risks and increasing the public’s awareness on such issues. The government encourages sustainable development, as reflected in procurement procedures. However, there are also threats to the environment and livelihoods that do not seem to be priority items for the government. But it's hard to make a judgement based on the financial constraints that we face and our current obligations. I would like to see more Jamaicans volunteering in their communities in green projects; and a greater effort to be made to teach our children in schools about the environment, “green” solutions to everyday issues and the impact of our current way of life on the environment.

GV: In your opinion, are Jamaicans in general becoming more environmentally aware and more conscious of the impact of climate change?

JE: Yes we are, as we have in recent times felt its impact in our homes. I am specifically talking about the drought of 2015, which left many households without running water, made us think more about our food security and helped improve the conditions for certain virus-carrying mosquitos to breed.

Whether he's an inventor, a businessman, or both, Jovan Evans is certainly an example of the creativity and innovation badly needed to move forward Jamaica's “green economy”.