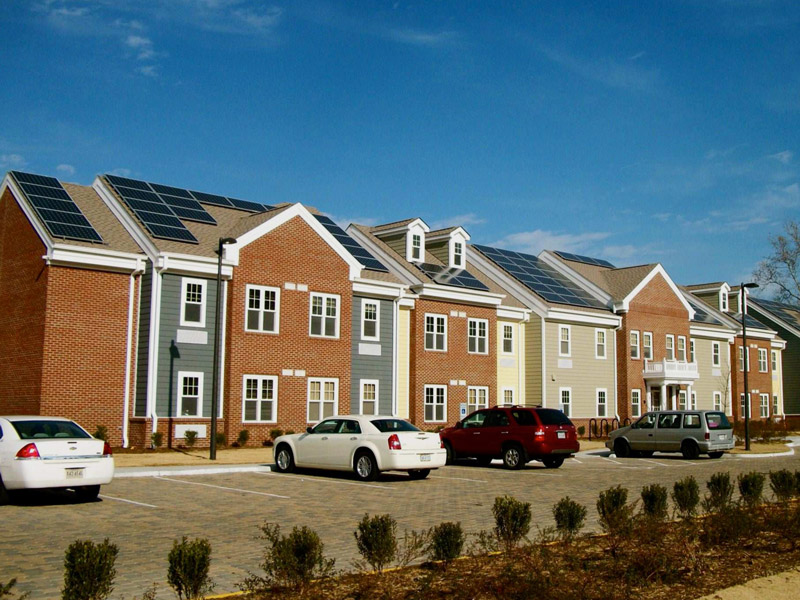 This post by Sophia V. Schweitzer  [1]was originally published  [2]on Ensia.com [3], a magazine that highlights international environmental solutions in action, and is republished here as part of a content-sharing agreement.

In the city of Ann Arbor in the northern US state of Michigan, the local housing commission is completing floor-by-floor renovations in the five-story Baker Commons [4] public housing facility with the goal of reducing energy use at least 20 percent. In Pittsburgh, about 280 miles (about 450 kilometers) away, Uptown Lofts [5] — affordable housing opened in February 2015 by the nonprofit ACTION-Housing Inc [6]. to provide homes for young adults phasing out of foster care and low-income workers — is designed to be capable of generating enough renewable energy to meet or exceed its annual energy demand.

Both projects provide healthful living for residents, thanks to good ventilation and stable inside temperatures, while minimizing utility bills.

“The improvements have made things better,” says Baker Commons resident Carolyn Miller, a former bookkeeper who now runs a lunch program and food pantry in the building. “The apartment stays warmer due to energy-efficient windows. I have also noticed when the system is running, it isn’t as loud as it used to be.”

Improved energy efficiency has long been an option — and a money-saver — for those who can afford the up-front costs. But, the close to 5 million [7] American households that call some form of low-income housing home, usually renters in multifamily buildings, are less likely than others to be able to afford or be empowered to make changes that in the long run would save both energy and money. So, ironically, they often pay the highest energy bills. A 2015 study by the nonprofit partnership Energy Efficiency For All [8] suggests that implementing energy-efficiency programs across a spectrum of affordable housing types could result in cost-effective energy savings of 15 to 30 percent, which even at the low end would represent large reductions in usage and savings.

But who gets the ball rolling? Low-income households can’t afford improvements. Equally important, they are bound to rental agreements and, depending on their building’s metering and heating system, they may not have direct control over energy bills. In addition, the improvements needed to reach cost-effective energy savings vary widely depending on the age and condition of the buildings, so building or retrofitting for energy efficiency involves case-by-case consultation with building energy specialists.

Emerging trends in retrofitting existing low-income housing for energy efficiency, novel designs for new low-income energy efficient housing, and innovations in financing, collaboration and policy are starting to turn that picture around.

Building owners and residents could save US$3.4 billion per year by making energy-efficiency upgrades in existing multifamily housing in the US, according to a 2012 study [9] by CNT Energy and the American Council for an Energy-Efficient Economy. But while that may make energy upgrades seem like a logical choice, it’s not so simple. As Coreina Chan and Jacob Corvidae of the energy think tank Rocky Mountain Institute [10] put it, improving energy efficiency in low-income housing is “a wicked problem in a complicated field.” Many stakeholders — tenants, landlords, utility companies, creditors and more — are involved, each with its own set of goals. The scale and size of properties varies greatly as well, so upgrades that make sense in one building may not in another. And when it comes to issues such as regulatory policy and technological choices, “the world is rapidly changing,” says Chan.

At the same time, though, that rapid change offers advantages. New business models and strategies for encouraging adoption of energy-efficiency-boosting retrofits are beginning to surface, thanks in part to the work of new forums such as the Network for Energy, Water, and Health in Affordable Buildings [11].

Besides creative thinking, science and facts also are needed for new approaches to retrofitting for energy efficiency to gain traction.

In the forums, parties that otherwise might never talk to each other share information and together shape tangible solutions specific to their local context. Mortgage collectors or lenders, for instance, learn to see the benefits of upgrades by talking directly with building owners. Or utility companies learn to better forecast long-term profits that might accrue by investing in new technologies or switching to different metering systems. Through these conversations, the low-income housing sector becomes less a case of charity and more a viable market with great economic potential.

Besides creative thinking, science and facts also are needed for new approaches to retrofitting for energy efficiency to gain traction. Northeast Energy Efficiency Partnerships, a nonprofit in Lexington, Massachusetts, provides local data that help stakeholders such as building owners, utility companies and policy-makers to take a long view. Some housing agencies invest in properties for 20-plus years at once, and can thus consider capital improvements with a relatively long payback period. This is what happened in Michigan, where the Ann Arbor Housing Commission has committed to make over 400 units [12] of their affordable multifamily housing, including Baker Commons, more energy efficient. Darren Port, building energy codes manager at NEEP, says clear data is helping convince utility companies to accept long-horizon paybacks as well.

“It is in their direct interest to invest in efficiencies,” Port says. “As the demand for power grows they have to generate more, but it is far more expensive to build new stations than to save energy in existing services.” And since multifamily housing units tend to be concentrated, utilities maximize their savings by addressing these before investing in detached, single-family homes.

Covering both public and multifamily private housing under several programs, the US Department of Housing and Urban Development [13] offers funds to housing agencies and building owners to update low-income housing. However, the money is limited and follows strict priorities: “A lot of old buildings have environmental health hazards like asbestos, mold or lead that need to be addressed first,” says Jason Bing of the Ecology Center, a nonprofit organization working with AAHC in Ann Arbor, Michigan, on two new affordable housing projects intended to be model examples of green and healthy residential construction.

In response, many state governments are creating their own funds to finance affordable housing energy upgrades. After Sacramento Municipal Utility District [14] in California launched a residential energy efficiency retrofit program in 2010, Sacramento’s housing agency received utility financing of over US$1 million by committing to complete multifamily building rehabs resulting in reduced energy consumption by 25 to 30 percent.

One-stop non-profit shops such as Elevate Energy [15] are also helping encourage energy efficiency upgrades of existing low-income units by educating owners, utility companies, financial institutions and potential other investors on non-energy benefits, which are any positive consequences accompanying energy upgrades outside of saving energy. For example, the increased comfort low-income households gain through the retrofits reduces stress and makes them more productive at work. When utility bills are low, residents are more comfortable to buy food. A 2000 Children’s Health Watch [16] study shows that decreasing the burden of energy costs has been shown to have positive effects on young children. Residents are also more likely to stay in their homes instead of looking for cheaper alternatives, which benefits building owners. Stability, in turn, may benefit the local economy — creating a win for everyone.

New construction of affordable housing has also entered an exciting new phase thanks to novel programs, policies and technologies.

These days, for-profit as well as non-profit affordable-housing developers produce approximately 90 percent of new low-income housing projects in the United States, capitalizing on the federal Low-Income Housing Tax Credit [17]. Some state-controlled housing finance agencies, which distribute the credits through a point scoring system, are using the competitive nature of the tax credits —just one-quarter to one-third of projects are funded on average — to encourage developers to advance energy efficiency. One way to do this is by giving preference to builders who commit to meeting third-party certified green-building standards. Uptown Lofts [18], for example, received tax credits from Pennsylvania in part by opting to meet Passive House Institute US [19] energy-efficiency criteria.

Other green building certification programs [20] have been appearing in other state plans that allocate the LIHTCs to developers, including Leadership in Energy and Environmental Design [21] for Neighborhood Development, EarthCraft [22] and Enterprise Green Communities [23]. All emphasize energy efficiency; some also include toxin-free, durable materials and water conservation, or, say, community infrastructure for biking and walking. In Minneapolis, Minnesota, a mixed-income property [24], The Rose, opened last year designed to be 75 percent more energy efficient than code requirements and built using Living Building Challenge [25] standards as a guide. And the Virginia Housing Development Authority [26]’s strong incentives for energy efficiency in allocating LIHTCs has resulted in more than 13,500 apartments in Virginia certified under EarthCraft energy standards, where households are welcoming energy savings of $54 per month on average compared with similar homes built without the green standard.

But are energy-efficient new buildings more expensive to build, even with tax credits in hand? Not necessarily. Up-front costs decrease when numerous projects commit.

“You can never say, a building should only cost this much. It always depends on the location and circumstances,” says Tim McDonald, a licensed architect and associate professor at Temple University in Philadelphia, who has been involved in efforts to expand Passive House standard programming. “But you can speak to scale. Demand drives pricing.”

McDonald points to the cost of triple-glazed windows: They used to come from Europe, which made them expensive, but they are now being made in the US, which reduces overall building costs. The sharing of ideas and tools among developers all learning about energy-efficient building practices also generates cost efficiency, McDonald says. It’s with this awareness that states such as Pennsylvania [27] have initiated larger concentrations of net-zero capable affordable housing or that California launched an action plan [28] in 2015 requiring that by 2020 all new homes — affordable and otherwise — produce as much energy as they consume.

In Ann Arbor, where the housing commission has a waiting list of more than 500, a new affordable housing project [29] is breaking ground this spring in which 20 old single-family detached units will make room for 42 townhouse-style units. West Arbor, as the project is called, will comply with the standards of Enterprise Green Communities as included in Michigan’s LIHTC allocation plan.

Here as well, sharing matters: The vision for West Arbor reaches beyond just being a green building for low-income residents and actively includes the wider community. High-school students are creating videos that serve as manuals for West Arbor residents to learn how to use energy-efficient technologies, such as heating and ventilation, inside their units for maximum comfort and cost savings. Middle-schoolers learn about green design working with an architect on plans for West Arbor’s climate-resilient community center. The activities help youth to understand what sustainability, low income and energy mean.

“We really believe, if we are going to make changes locally, we need to do everything we can to get as many stakeholders involved as possible,” Bing says.

We may have no choice. Across the board, residential and commercial buildings account for 41 percent [30] of the country’s total energy consumption, and 45 percent of greenhouse gas emissions are related to the building industry. To avoid dangerous climate change, no building is exempt.

Sophia V. Schweitzer [1] is a science writer focusing on climate change and the environment. Her work has appeared in numerous publications, including Yale Environment 360, Pacific Standard, Wired.com [31], Hakai and Buddhadharma. She is the author of Big Island Journey and several other books.