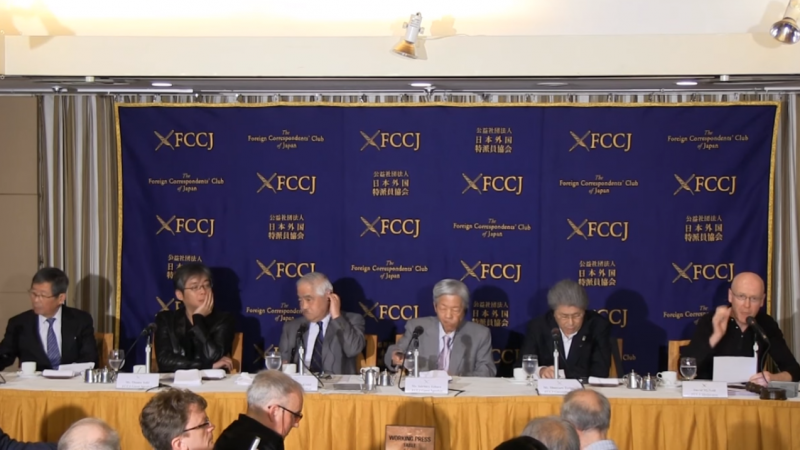 A group of Japanese broadcasters is speaking out about what they say is efforts by the government to restrict press freedoms in Japan.

The press conference, with English-language captions, can be viewed here.

Their concern was triggered by an announcement in February in Japan's parliament by Japan's minister Internal Affairs and Communications Minister Takaichi Sanae that the government can order broadcasters to suspend operations if they air TV programming that is deemed politically biased.

According to David McNeill, a journalist who covers Japan on behalf of the Irish Times, Independent and The Economist, Takaichi's comments triggered fears about “what appears to be a sustained government attack on the country's remaining critical media”.

The foreign press in Japan, including the FCCJ, has long provided a public forum to facilitate discussion of Japan's media landscape.

For example, one Japanese Twitter user re-Tweeted a cartoon by David Simonds that appeared in the Economist and that has been widely shared on social media:

This really tells the story of the Abe government, doesn't it?

In the cartoon, Japanese Prime Minister Abe appears to be sitting enthroned on the backs of the media.

The group of five journalists had already been speaking out against the communications minister's remarks.

[Banner reads] “I AM ANGRY! Minister Takaichi's remarks about shutting down broadcasters is against the spirit of the Japanese Constitution and Japan's broadcasting laws.”

Just adding fuel to the fire, I think…

For the last several years there have been rumors that the Abe government is pressuring Japan's national broadcasters to mute criticism and remove outspoken television personalities.

After veteran Mainichi News journalist and TBS commentator Kishii Shigetada criticized the Abe government's controversial security legislation last year, conservatives took out newspaper ads accusing Kishii of violating Japan's broadcast laws. Kishii announced he would step down from his work as a commentator on TBS's News 23 program, but would still continue to comment on government policy.

Furutachi, a loquacious and opinionated television commentator who is well-known for his florid, colourful and erudite delivery, is not leaving without a fight.

In a recent segment on his program News Station (報道ステーション, Hodo Station), Furutachi fired a parting cannonball at Minister Takaichi:

In fact, in his final month on air Furutachi has compared Abe to Hitler and Japan to the Weimar Republic.

Learn the lessons from the Weimar Republic and understand the danger of revising Japan's Constitution! Here's one last broadside from Furutachi Ichiro before he vanishes from the airwaves.

[Video caption, top right] How are dictatorships born? [Bottom] There is no other way forward.

This will go down in history as Furutachi Ichiro's masterpiece!

March 2016 marks a time of change for Japanese television broadcasting. Kuniya Hiroko, a highly regarded broadcaster was also forced out of her long-running show Close-up Gendai this past month.

Appearing every evening on national broadcaster NHK, Close-up Gendai was long regarded as one of Japan's best news programs.

With Kuniya gone, NHK has decided to take the show in a different direction.