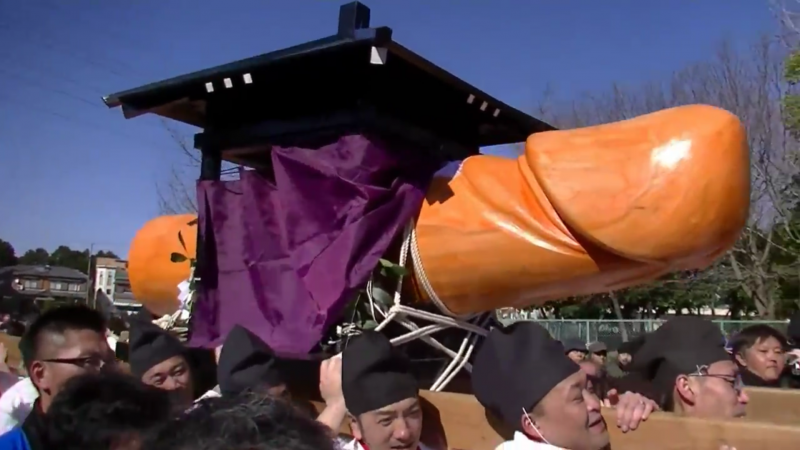 Transporting a sleeping deity to meet his female consort. Every year on March 15, coinciding with the vernal equinox, the Hōnen Festival is held at Tagata Shrine in Komaki. Image from  YouTube user 谷古宇正信.

In the Christian tradition, Easter marks the resurrection of Jesus Christ. Some scholars say the holiday, which falls around the spring equinox, has some pagan or pre-Christian influences. For example, in some Western countries the Easter holiday is represented by colored eggs and rabbits—both symbols of fertility and the promise of rebirth in spring— that were used by ancient Saxons in Northern Europe, while they worshiped the Goddess Oestre (or Eostre).

Some regions of Japan also mark the start of spring with a fertility festival.

At Tagata Shrine (田縣神社, Tagata Jinja), in Komaki, just north of Nagoya in central Japan, the symbolism is stark; there is no beating around the bush, as prayers for fertility and bountiful harvests in the coming year are represented by a large wooden phallus.

Every year on March 15, coinciding with the vernal equinox, the Hōnen Festival is held at Tagata Shrine in Komaki. A sleeping male god, Takeinadane, is brought to visit a sleeping female deity, Tamahime-no-mikoto (both dieties reside at their own shrines in the neighborhood).

The festival includes a variety of wooden phalluses, some borne by members of the procession, others sold as trinkets or snacks.

The annual fertility festival attracts crowds of locals and tourists.

The deities meet at Tagata Shrine in Komaki, and are delivered by mikoshi portable shrines.

Originally Takeinade, the male deity, was represented by a straw effigy with a small wooden phallus. Over time, as the festival evolved Takeneinade and his wooden phallus were obscured inside the mikoshi portable shrine.

Because of this, the wooden phallus has grown over time, as it is replaced each year, so that it is now about 2.5 meters (13 feet) long and weighs 280 kilograms (620 pounds).

Tamahime-no-mikoto is returned to her home at Ogata Shrine just up the road.

You can explore the Honen Festival on Instagram and Twitter using the hashtags #tagatashrine, #田県神社 and #豊年祭.