Ahead of Hong Kong's legislative election this September, the local government and pro-Beijing political parties are fanning prejudice against asylum seekers in a campaign strategy that mimics, some say, Donald Trump's presidential run in the United States.

Hong Kong Chief Executive Leung Chun Ying made anti-refugee sentiment a leading election issue this January, when he suggested in a speech that Hong Kong has the right to withdraw from the UN Convention Against Torture “if necessary.” Leung later praised the newspaper Oriental Daily, thanking it for covering the problem of “fake” refugees being smuggled into Hong Kong for economic purposes.

As of February 2016, there were more than 11,000 asylum applications submitted in Hong Kong. The logjam is largely the result of an appellate court ruling [2] in 2013, which set a new “high standard of fairness” in the immigration review process. As a result, most preexisting applications had to be reprocessed under the newly introduced Unified Screening Mechanism (USM).

Local human rights groups and refugee groups slammed Leung's remarks, criticizing him strongly for warning against “fake” refugees, which activists say reinforces prejudices against asylum seekers. The Hong-Kong-based Human Rights Monitor suggested [3] that Leung's comments about withdrawing from the Torture Convention are his “revenge” against the UN Committee Against Torture, which criticized Hong Kong's police actions against peaceful demonstrators during the two-month-long Occupy Central movement in 2014.

Despite the criticisms, former Security Secretary Ambrose Lee Siu-kwong (who today serves as a representative in China National People's Congress) has supported Leung, and is pushing to denounce the Torture Convention. Lee even submitted a proposal during the annual parliamentary meeting asking Beijing to exempt Hong Kong from the convention in March.

While Hong Kong is not a sovereign state and hence is in no position to withdraw from the convention, pro-government legislator Priscilla Leung suggested that [4] the city could ask the central government to exempt Hong Kong from enacting the convention under the “One Country Two System” policy.

Meanwhile, two pro-establishment political parties (the Democratic Alliance for the Betterment and Progress of Hong Kong, as well as the Liberal Party) have begun advocating for the construction of closed refugee camp.

Dominic Lee, a young rising star of the Liberal Party planning to run for office this September, wrote [5] on Facebook this week that he's got 108 banners against “fake refugees” ready to be hanged in the streets. 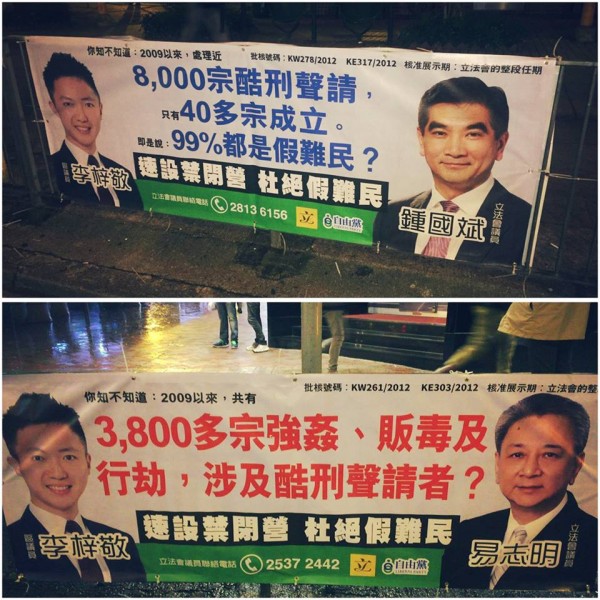 The top banner above reads, “Among 8,000 applicants, only 40 cases have been established, which means 99 percent of the applicants were fake refugees. Build closed refugee camps ASAP and put a stop to fake refugees.”

The bottom banner above reads, “Did you know that, since 2009, there have been more than 3,800 cases of rape, drug dealing, and robbery involving [asylum] applicants? Build closed refugee camps ASAP and put a stop to fake refugees.”

Dominic Lee also leads the Alliance Demanding Repatriation of Refugees, which tracks [7] serious and minor crimes allegedly committed by refugees in Hong Kong and around the world.

Hong Kong’s low substantiation rate is not reflective of unworthy or “fake” refugees, but instead a product of the Immigration Department’s unreasonably high standards.  For example, Justice Centre Hong Kong, a refugee rights advocacy group, noted several rejected claims grounded in the government’s conclusion that that there is no risks in the country of origins, even though the rejected claimants are from countries flagged by the United Nations High Commissioner for Refugees (UNHCR) as countries of concern due to widespread conflicts and persecutions.

Journalist and TV talk show host Michael Chugani also shamed [9] the pro-Beijing politicians for treating dark-skinned refugees like criminals who should be locked up. Chugani called it “the Trump Card,” referring to Donald Trump's controversial remarks in the US presidential race and immigration and asylum.

The public tends to believe what they read in the media […] and the coverage has been mostly negative. Local people are not exposed to refugees in a micro-environment, and as a result these negative stereotypes are not dispelled. One common allegation is that the refugees are “fake”.

Local human rights activists, on the other hand, argue that Hong Kong's issues with the UN Torture Convention are a “fake issue [11].” Even outside this convention, activists say, the authorities still have international legal obligations to accept refugee claims under “fairness” principles. Perhaps even more importantly, China has weathered far more severe criticism about its human rights practices—including harsher criticism regarding torture—and yet it's never attempted to withdraw from the UN convention.