The Days of Self-Contained Extremism are Over 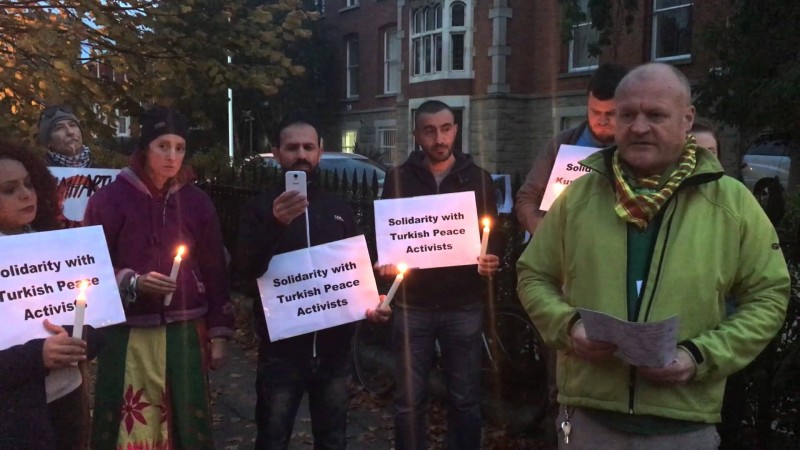 Residents of Dublin show solidarity with victims of a bomb blast in Ankara that killed over 100 people last October. Screen capture from YouTube video shared by Workers Solidarity Movement.

In the aftermath of the two attacks that claimed the lives of at least 30 people on the morning of March 22 in Brussels, Europeans again find themselves shocked at the spread of extremism to their once-safe corner of the world.

Until a few years ago, suicide bombings happened mostly in Middle Eastern countries, and such news barely registered with citizens of the world's more prosperous countries. Today, however, terror has become truly international. The dark underbelly of globalisation threatens rich and poor, Muslim and atheist, Belgian and Turk, with no reprieve in sight.

The explosion on March 13 that claimed the lives of 37 people in Ankara, Turkey, made me once again worry about double standards. Those of us who enjoy the advantages of life in the relatively prosperous and ‘civilized’ corners of this world are not as sensitive as we believe to the injustice beyond our borders.

I am a Turkish citizen, studying for a Master's degree in Rome. I have been living in this ancient European city since September 2015, and during this period I have made friends from Italy, Germany, Georgia, Peru, France and many other countries.

I have vivid memories of the night of November 13, 2015, when terrorist attacks killed 130 people in Paris.

“. . . that support was strangely absent two weeks ago after the attacks in Ankara perpetrated by the Kurdish nationalist group TAK (Kurdistan Freedom Falcons). Despite my international network of friends on Facebook, none of them adorned their profile photos with the Turkish star and crescent. . . “

A group of us were just about to go out for the evening when we heard the news. Some of our friends didn't end up joining us that night, as they either had friends who were stuck in the middle of Paris, or were scared of the potential for repeat attacks across Europe. I was quite scared as well. For those of us who did go out the incident overshadowed the evening, and the conversation was dominated by talk of the attacks. The days that followed were the same. The world showered the Parisian people with support. Facebook users overlaid their profiles with an image of the country's flag.

Yet that support was strangely absent two weeks ago after the attacks in Ankara perpetrated by the Kurdish nationalist group Kurdistan Freedom Falcons (TAK). Despite my international network of friends on Facebook, none of them adorned their profile photos with the Turkish star and crescent (not that I'm necessarily in favour of these Facebook-profile shows of solidarity), posted much news, or updated their status related to the incident.

The day after the attack, almost none of my friends from my Master's program inquired after my friends and family in Turkey. There was no global hashtag movement on Twitter condemning the dreadful incident. When I looked at my friends’ faces, when I checked my social media feeds, all I could see was indifference.

Then I realised that the €3 billion assistance the EU offered to Turkey in order to create a “migrant buffer zone” was of greater interest to many of the Europeans I was interacting with than the people dying in terror attacks in the same country. I felt embarrassed for them, until I remembered the indifference that people in the more developed parts of my own country also exhibit towards the broad human rights abuses inflicted in regions of Turkey they regard as unsafe and underdeveloped.

“. . . I remembered the indifference that people in the more developed parts of my own country also exhibit towards the broad human rights abuses inflicted in regions of Turkey they regard as unsafe and underdeveloped.”

I felt embarrassment for those of my fellow citizens who blindly continue to support the policies of the most ambitious and greedy leader Turkey has ever known, ignoring the responsibility he bears for the growing violence against civilians living under state-imposed curfews in places like Cizre, Sur and other districts in the country's Kurdish regions.

The elections in November 2015 that gave President Recep Tayyip Erdogan's ruling Justice and Development Party (AKP) another term in office took place in an atmosphere of fear and bloodshed, an atmosphere that played into the AKP's claims that peace and stability would be impossible without their continued rule. The party bullied and panicked the electorate as it allowed a decades-old conflict to re-escalate after a period of peace. Those who voted for the AKP rewarded them for doing this. Now the biggest cities in western Turkey are threatened by attacks organised by so-called pro-Kurdish groups like TAK.

TAK's attacks on Ankara, which occurred just three weeks apart, claimed the lives of 65 people. A recent interview by the BBC's Turkish service with a spokesperson from the Group of Communities in Kurdistan (KCK), an organization founded by the Kurdistan Workers’ Party (PKK), revealed that PKK plans more attacks in Western Turkey in the coming months.

The higher the death toll in Turkey's Kurdish areas, the greater the chance of attacks in Ankara or Istanbul. And as violence grows in the Middle East, the more vulnerable Europe's cities become. The days of a self-contained extremism are over. The violence can spread anywhere.

But even as citizens accustomed to stability and privilege close their eyes to the daily cycle of insecurity and violence experienced in other parts of the world, the spread of extremist attacks into traditional zones of safety, whether in Western Turkey or Western Europe, is inevitable. Those who do not stop to question the excessive brutality of Turkish forces in the Kurdish-populated east should not be shocked when a similar violence is visited upon the places they are used to calling home. By the same token, while the people of the West remain blind to bloodshed in the Middle East, either by forces from their own countries or by extremist groups like ISIS, the flames of this chaos will surely continue to spread.

“. . . after the suicide bomb attack that took place in Taksim, in the heart of Istanbul, on that Saturday morning, I, like millions living in the city, didn't dare to go out. . . . Home is supposed to be the place you feel safest, but all I could feel was fear and the sense of being trapped.”

British author Antonia Fraser wrote that “as long as you persecute people, you will actually throw up terrorism.” People who enjoy prosperity in ‘happier’ or ‘safer’ parts of the world must raise their voices against the oppression taking place across the rest of the globe. Rather than developing a hollow racist approach towards refugees who seek asylum in Europe, westerners should instead be vocal about the pro-war foreign policies of their governments, many of which are key players in the never ending international mess in Syria. Harbouring hatred for those who flee from brutality at home is not the answer. Promoting civil society participation in political decision making processes is a more effective method of finding win-win solutions.

I was in Istanbul last weekend to visit friends whom I seen in six months. I was so excited about going back home, to experience the familiar views of the Bosphorus and all the things I'd missed so much during my time away. But after the suicide bomb attack that took place in Taksim, in the heart of Istanbul, on that Saturday morning, I, like millions living in the city, didn't dare to go out, and ended up not seeing many of my friends. Home is supposed to be the place you feel safest, but all I could feel was fear and the sense of being trapped. I would hate to experience a similar incident in Rome, and I wouldn't ever want my loved ones there to be exposed to similar threats.

My thoughts and my heart go out to my friends and all the people living in Brussels. I feel their fear and their deep sorrow. But my wish is for all of us to feel those things after every incident in this proliferating brutality, wherever in the world it may take place.