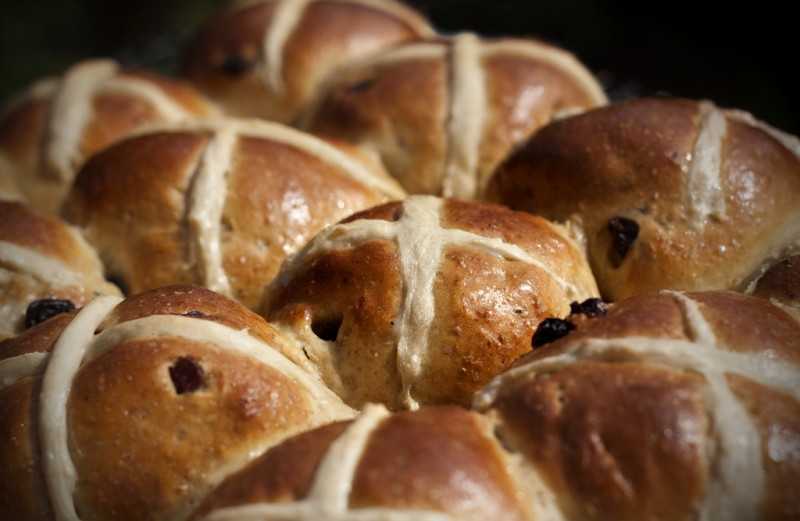 Every Easter, the Caribbean — like many other Commonwealth and largely Catholic territories — enjoys a revered tradition of eating hot cross buns. The popular treat is a sticky sweet bun made with raisins and topped with a cross made of icing. Munching into them on Good Friday, when Christians commemorate Christ's crucifixion and death, typically heralds the end of the Lenten observances of fasting and denial.

Several regional food bloggers have posted recipes for hot cross buns over the years, but for Simply Trini Cooking, the treat stirred up warm memories of the neighbourhood “bread van”:

The common sound of the horn alerted us to its coming, and every child would be eager to see what the ‘bread man’ had at the back of his Suzuki Carry van. As soon as the side door opened the aroma of fresh baked goodies hit our nostrils. There was always on sale currants roll, coconut turnovers, coconut sweet bread, jam tarts, butter bread, biscuit cake (sometimes), hops bread and on Holy Week there was Hot Cross Buns.

Ah! hot cross buns I can taste it now. The hard outer crust gave way to a moist, soft, interior that would have your taste buds craving for more, but by then it would be too late because the ‘bread van’ was long gone. So, you would either have to do without or remember to buy two or three when the van came next time.

Before sharing the recipe, the blogger talked about the history of the hot cross buns tradition:

The origins of hot cross buns dates back centuries ago. Many Christians today see hot cross buns as an imitation of the unleavened bread eaten during passover. However, others can date the origin to the era of the Egyptians and Greeks who also had small loaves for their religious devotions and worship to their gods.

The Egyptians and Greeks considered the shape of the loaf to represent the moon. However, the Romans believed the cross symbol represented the four quarters or phases of the moon. Later, the Christian church reinterpreted the icing cross as a symbol of the crucifixion.

The popularity of the hot cross buns grew when a monk named Father Thomas Rockcliffe began the tradition of giving hot cross buns to the poor of St. Albans, England, in 1361. The Protestants considered this a Catholic tradition and attempted to stop the practice.

However, the tradition was further solidified when Elizabeth I passed a law permitting bakeries to sell them only on festivals such as Easter and Christmas. So by 1733, the popular hot cross buns had its own song that could be heard by street vendors selling hot cross buns: ‘Hot cross buns! hot cross buns! one a penny, two a penny, hot cross buns.’

The Caribbean puts its own spin on this treat. The Jamaican Blogs notes that “hot cross buns are a big part of Jamaican culture, just like several other representative foods such as saltfish or ackee”:

The concept dates back to ancient Babylon, when cross buns were offered to Ishtar, the pagan queen of heaven.

Ancient Greeks made similar cakes to honour the moon.

The tradition found its way to England, where cross buns were eaten on Good Friday, with the cross symbolizing the crucifixion of Jesus.

When the British plundered Jamaica, of course they brought the custom to the island.

Over time though the English version of the cross bun transitioned to the Jamaican version, with some key differences.

Jamaica’s version is made with molasses, while the buns from England were made with honey.

In Jamaica, you eat the bun with cheese, a combination that has become ingrained in island culture.

British custom has waned when it comes to eating hot cross buns as fasting food on Good Friday, but in Jamaica the practice is as prevalent as ever.

Today the custom is seen as more Jamaican than British. And eating cheese is now a year-round practice, while the bun and cheese dish is prevalent primarily during the Easter holiday.

The baking (and eating!) of hot cross on Good Friday is alive and well throughout the Caribbean and in the diaspora — check out this step-by-step YouTube video of how to make your own Caribbean-style hot cross buns:

Are you singing the song yet? Eat and enjoy!