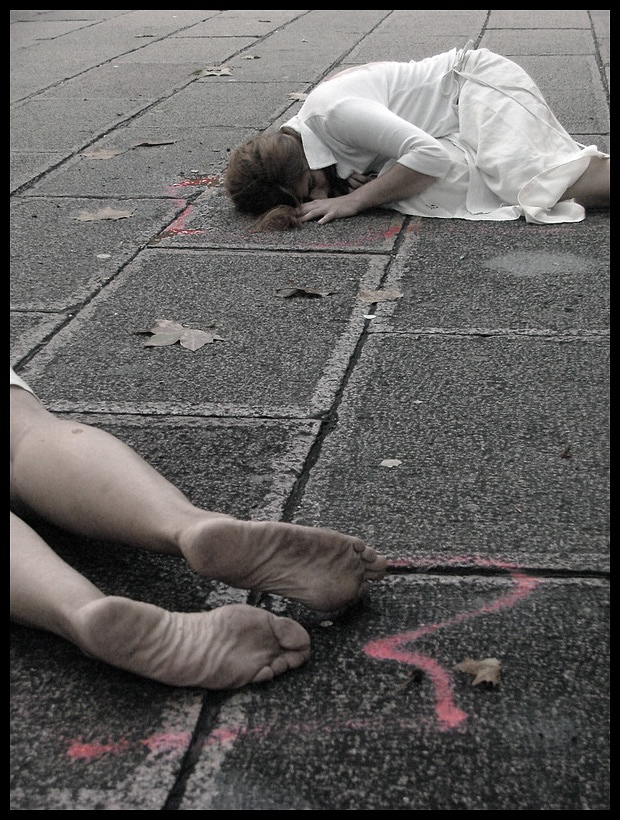 Violence against women is rampant in Mexico, with experts and activists pointing to antiquated gender norms and insufficient government solutions as some of the reasons why the problem persists. The sexual assault of a journalist in broad daylight in Mexico City earlier this month (on International Women's Day, no less) and subsequent inaction by prosecutors is just a recent reminder of the issues women in Mexico face.

Such violence is palpable not only on the Mexican capital's streets but in different parts of the country as well, where sexual abuse adds to murder, both of which often go unsolved and unpunished. Ciudad Juárez (in northern Mexico, on the US border) was one of the first cities to draw attention to this phenomenon, according to Reporte Índigo's Imelda Garcia :

The murder of hundreds of women in various parts of the country sounded the alarm on the dangers of being a woman in certain areas of Mexico. First it was Juárez, in Chihuahua, where the disappearance and murder of women have been an issue with international relevance since the 1990s.

The National Commission to Prevent and Eradicate Violence Against Women (CONAVIM) was established in 2009 to promote (among other things) compliance with international obligations regarding women’s human rights. Some of these obligations arose from the “Campo Algodonero” case, where the Inter-American Court of Human Rights declared that the Mexican state is responsible for a litany of violations of these rights.

The CONAVIM is tasked with operating Mexico's Gender Violence Against Women Alert (AVGM), which is meant to “ensure the safety of women and girls, the cessation of violence against them, and the elimination of the inequalities produced by public policy that violates their human rights.” Civil society organizations and human rights groups are able to request a gender-violence alert, and CONAVIM then forms a working group to review the situation in question and decide whether or not to issue an alert.

When the AVGM is declared, the commission establishes prevention-and-justice security measures that the local government should take to address gender violence. Usually the security measures refer to “reinforced patrols” and police operations in strategic locations. As for the “justice measures,” they usually have to do with creating more specialized units that handle only investigations of crimes committed against women.

To get an idea of the situation, so far alerts have been requested in 15 of Mexico's 32 states. CONAVIM has already formally declared alerts in counties in two different states. Additionally, the states of Puebla, in central Mexico, and Sinaloa, in the country's north—both recently asked CONAVIM to declare alerts in their areas.

With requests for gender-violence alerts on the rise, many Mexicans are asking what effect, if any, the trend might have in the long term.

CONAVIM and its alert system adds to the array of Mexico's bureaucracy created and publicly funded in order to promote gender equality and eradicate violence against women. (Other institutions in this network include the National Institute for Women, the National Commission for Human Rights, and the National Council to Prevent Discrimination.) Many in Mexico are deeply suspicious of all these government organizations’ efficacy. Some social-media users, such as Madame Déficit, have argued this point online.

CONAVIM CONAPRED CNDH INMUJERES, and so on. A lot of bureaucracy and little real protection / justice for us women. #GenderViolence.

Reporte Índigo's Imelda Garcia, meanwhile, says the lack of transparency makes it difficult to know the magnitude of gender-based violence in Mexico, and complicates efforts to assess the government's actions. For instance, Garcia argues, the National Public Security System reports no disaggregated information about femicides, and the Interior Ministry quantifies homicides without distinguishing between men and women. This became evident after a private citizen asked for the statistics in August 2015 and the government office answered the information doesn't exist.

Commenting on the abuses, the difficulty women have to get justice, and the frequency of gender-based violence in Mexico, Amnesty International recently sponsored an art installation called “The Clothes Line,” where the group displayed sheets of paper containing women's descriptions of their experiences as victims of abuse and domestic violence.

“The Clothes Line”: They want to walk free on the streets and wear the clothes they want.

[Image reads, “When was the first time you were harassed?” The response says, “I was sixteen. I was traveling on the bus to the school and there was a man in front of me who started staring at me. I couldn't understand what that look meant until he touched my vulva. I could only punch him. Nobody else did anything.”]

The Inter-American Commission on Human Rights has also stressed that it is constantly informed of cases of sexual and gender torture in Mexico:

We are alarmed that gender and sexual torture are perpetrated by agents of the state in Mexico.

David Uribe talks about the challenges that women face in getting justice.

While the Mexican government adds to its bureaucracy and tries to show signs that it wants to address the problem of violence against women in the country, the facts show there's still a long way to go, before anyone should consider hanging a “mission accomplished” banner.