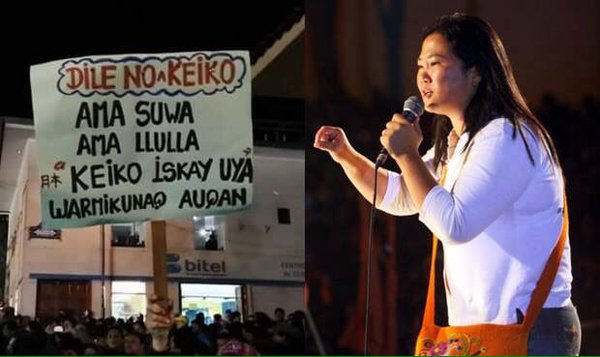 Protester at a rally speech by Keiko Fujimori. Sign reads, “Stop stealing, stop lying. Keiko is a hypocrite and enemy of women.” Quechua translation by @Suyakuq. Image shared by @patriciafloresr on Twitter.

Lima, the capital of Peru, hosted two massive protests earlier this month aimed at presidential candidate Keiko Fujimori—the daughter of the controversial former President Alberto Fujimori, who's now serving out a 25-year prison sentence on charges of corruption and crimes against humanity. There were also protests in the southern city of Tacna, which Keiko visited on March 16 for a campaign rally. Why is Peru's leading candidate encountering so much backlash?

This year's election began with 19 different presidential candidates, which many thought was excesive. In February, two candidates withdrew, reportedly due to a lack of support. In March, however, the National Jury of Elections (JNE) removed the race's two strong candidates. César Acuña was kicked out of the race after he was caught handing out cash to voters as part of his campaign, while Julio Guzmán‘s candidacy was canceled after his party committed voting irregularities in its nominating primaries.

The JNE's moves generated serious concerns among voters that have yet to dissipate (especially regarding Gúzman, who was thought to have a strong chance of reaching a runoff vote).

Later, reports emerged that there was a pending exclusion order brought before the JNE against Keiko Fujimori, as well, for reasons similar to those brought against Acuña. It was under these circumstances that the first massive protest against Keiko took place on Thursday, March 10, in the city of Cusco. The demonstration was large enough to force the candidate to end her rally, just 15 minutes after it began.

Today, the citizens of Cusco took to the streets to express their rejection of Keiko. Keiko Is A No Go

This is how they threw out Keiko Fujimori from Santiago Plaza in Cusco, where she was having her rally.

The following day, on March 11, the first “No To Keiko” march took place. According to its organizers, the demonstration was meant “to keep Keiko from being elected and to deny her voting registration after buying votes in exchange for goods, that is, for playing with the hopes of many Peruvians.” The protest succeeded in uniting a wide array of young people numbering in the thousands, who took to the streets chanting slogans about crimes committed by former President Fujimori.

This photo is spectacular!

Keiko rat study with your money, Plaza San Martín. Withdraw Keiko. Keiko Is A No Go.

Days later, public indignation grew when the JNE said it could not prove the allegations brought against Keiko Fujimori, leading to widespread accusations against the JNE of political favoritism. Meanwhile, new petitions to the JNE to exclude Keiko from the race have poured in, claiming that she and members of her campaign have offered money and gifts in exchange for support in the election, in violation of Peruvian law.

The March 15 protest against Keiko in Lima also demanded that the JNE exclude Keiko from the election process. Between 4,000 and 20,000 people are believed to have attended this demonstration.

VIDEO Huge “Keiko Is A No Go” march on Wilson Avenue. Blocks of people demonstrating against the candidate.

Thousands, yes, thousands of people in the streets marching in condemnation of Keiko and the JNE that's protecting her. No To Keiko

Throughout 2015 and into this year, Keiko had the commanding support of 30 percent of likely voters. A few polls even put her support at 37 percent. Some analysts have said the shrinking pool of candidates might even benefit her campaign. So why has Keiko's candidacy now mobilized a significant protest movement against her (and her father's legacy), bringing together leftists, anti-corruption activists, and undecideds?

In part, Keiko has helped grow the ranks of her own critics by publicly dismissing the protests as undemocratic and organized by terrorists. Keiko also hasn't been shy about resorting name calling, either:

We cannot accept acts of violence against the campaign. I'm not going to stop or suspend events on account of small groups of intolerant people who don't agree with us.

Responses like these have been counterproductive, reviving many people's memories of her father's authoritarianism. As columnist Claudia Cisneros writes:

The Fujimori policies of Alberto live today in Keiko: the sames abuses, privileges, horrors, and looming control of the press as in the 90s.

It's impossible to know what will happen over the next several weeks, though it's almost certain that Keiko will qualify for the second-round vote (at least 51% of the votes are needed to win the election on the first round). Who will join her in the runoff remains unclear, but that candidate's potential victory will rely on winning over Keiko's various detractors.

Meanwhile, the election outlook continues to change. On March 16, for example, the JNE determined that Vladimiro Huaroc, a member of Keiko's presidential ticket, had to be removed for buying votes in the Junín region. This decision can be appealed, incidentally.

Protesters aren't giving up, and large anti-Keiko marches are planned throughout Peru on April 5, the 24th anniversary of the  “Auto-Coup,” when then President Alberto Fujimori dissolved country's congress and judiciary and assumed full legislative and judicial powers.

The original version of this post was published on Juan Arellano's blog, Globalizado.