Beyond Heroics and the Cold War, Changing the Discourse on the Grenada Revolution 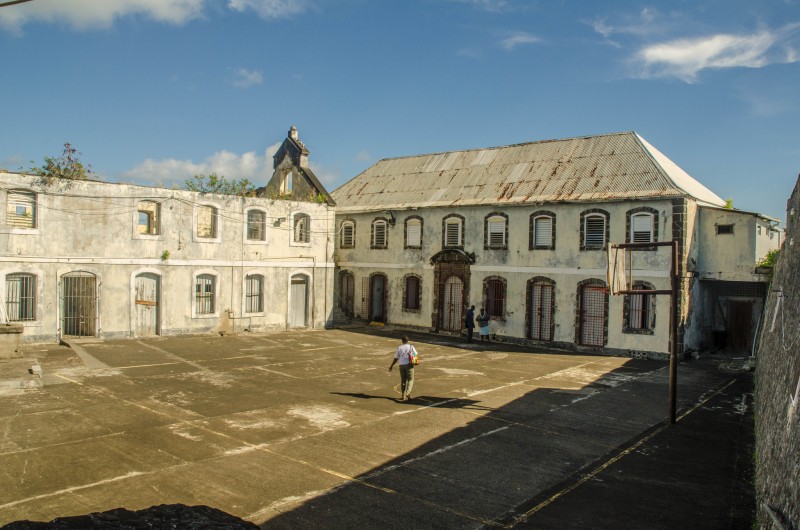 The courtyard at Fort George, Grenada, where Maurice Bishop, leader of the People's Revolutionary Government, along with seven other Cabinet members, were executed by firing squad on October 19, 1983, after a coup led by factions within the party. Photo by Wayne Hsieh, used under a CC BY-NC 2.0 license.

Thirty-seven years after the overthrow of Eric Gairy, scholars and activists continue to explore the five-year long Grenadian Revolution and question the overarching shadow of the Cold War on the popular narratives around it.

The revolution began on 13 March 1979, when the Marxist opposition New Jewel Movement (NJM), led by Maurice Bishop, overthrew Gairy, who had ruled the country since independence from the UK in 1974.

NJM, rebranded as the People's Revolutionary Government (PRG), launched an armed takeover of key locations while Gairy was outside Grenada. PRG suspended the country's constitution, banned other political parties and got cosy with US-rival Cuba. Bishop's rule and the revolution ended five years later when he and seven cabinet members were executed in 1983, in a bloody coup from within his own party, prompting a United States-led invasion of the Caribbean island.

Unorthodox as his methods of gaining power were, Bishop enjoyed a strong support base, thanks to his focus on racial equity, as well as workers’ and women's rights. But there were naysayers as well: his government refused to hold elections, and any dissenting voices — especially from the press and the opposition — were victimised. Many journalists, accused of “acting against the interests of the revolution”, were jailed for their outspokenness against the Bishop government.

Still, his followers remained loyal. Once the coup was underway, his supporters converged on his residence, freeing him from house arrest and triumphantly marching en masse to Fort George, where they thought they would be safe. Instead, the army followed them and began shooting; some civilians were killed, and Bishop and his political peers were assassinated.

Prior to this year's anniversary of the start of the revolution, the Grenada Country Conference hosted a gathering at the University of the West Indies in St. George's. The Groundation Grenada blog, which strives to raise critical awareness on social justice issues while preserving the integrity of Grenadian history, commented:

One thing is clear; there are multiple stories about what happened and why […] The Grenadian Revolution has clearly left an indelible mark on the Grenadian, Caribbean, African and global psyche. The diverse colours of those memories reflect a rainbow of diverse emotions and in some cases, facts.

Pushing back against the single narrative

The post expressed concerns, however, that the revolution continues to be dominated by a single narrative — “‘Thank God for U.S. and Caribbean Heroes of Freedom'; a message that is etched and continuously maintained, on a dilapidated building near the Coca-Cola Bottling Plant in Tempe, St. George’s”. A constant reminder of this point of view is seen soon after you leave the airport:

Two large white arches [remain] one of the longstanding achievements of the ‘revo’. Though facts state otherwise, the Airport was framed as a military base for communist mobilization and thus used by former US President Ronald Reagan as one of the reasons to ‘intervene’. The placement of those arches near what has been renamed the Maurice Bishop International Airport, can only be described according to [Caribbean anthropologist] David Scott as, ‘on the one side, the mocking cynicism of imperial power; on the other, the limp prostration of the absolute defeat of spirit. It is empire’s sneering reward for a people’s audacity’.

Noting that “thousands of Grenadians were involved in and continue to be impacted by the Grenadian Revolution, therefore it is critical that they play a central role in these post-Revolution conversations”, Groundation also questioned the message that the government is sending when it chooses to erase the significance of certain aspects of the revolution — “days upon which the people of Grenada decided to take change into their own hands” — and focus instead on the country's “rescue” by US troops:

What is allowed to remain, how it is remembered and the placement of sites of memory is important in understanding the intended purpose of a monument, piece of art, plaque or any other tangible embodiment of memory.

How is it that such a diversity of complementary and contradicting stories surrounding the Grenadian Revolution, have become sanitized and reduced to mainly one, further instilled by the national holiday on October 25 – ‘Papa Reagan’ and other invading forces, have come to save the day! This truly begs the question, whose memories are we remembering and for what purpose?

‘The right to remember’

Dr. Ralph Gonzalves, Prime Minister of St. Vincent and the Grenadines, who spoke at the UWI event, called it “an exercise in the right to remember”, which he says “imperialism and colonialism and the regimes which have global hegemony” want to take away:

We have to remember its [the revolution's] strengths and possibilities and its weaknesses and limitations so that we can learn.

Gonsalves also left the audience with questions to consider, including the types of political and economic systems that would be appropriate for the Caribbean experience.

Some netizens marked the anniversary of the revolution on Twitter:

‘What the #Grenada #Revolution did was to open up a space of imagination…to imagine that another world is possible.’ Dr. David Hinds

We should be proud of our history! We are not the first set of people to make mistakes when attempting to engage in transformative change, particularly when that change attacks the longstanding foothold of global systems of power such as capitalism, colonialism and white supremacy. However, we are definitely the first anglo-speaking, predominantly African-Caribbean nation to decide that only we, can change our fate and we did. We are admired and if not admired, at the very least researched, by so many Caribbean and other non-Grenadian people; why do we not feel that pride?

We must also […] find healthy and accountable ways of respecting and integrating difference otherwise we run the risk of turning real and metaphorical guns against the people.