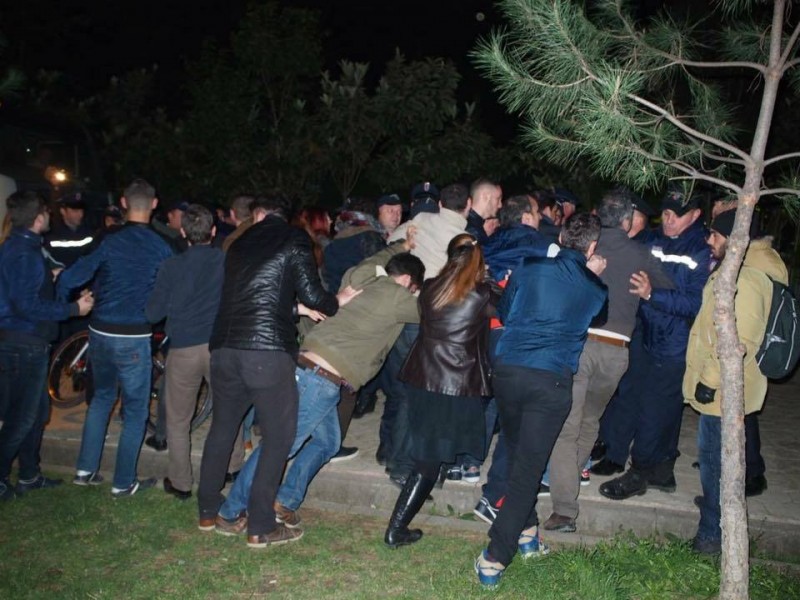 Citizens trying to stop a cement mixer truck. Photo by “Qytetaret Per Parkun” (Citizens for the Park), used with permission.

Activists in Albania are continuing to protest against plans to build a children's play area in the last public park in the capital Tirana.

Opponents of the construction say the project will drown the green space — something that's already lacking in the city — in concrete. Tirana's Mayor Erion Veliaj disputes this. Responding to demands for transparency, Veliaj posted some videos on his Facebook profile, retorting that new construction will not use concrete, but sand and plastics only.

The mayor's office says the project is necessary because the city's haphazard development has left children without many play areas. Protesters argue that poor planning is no excuse to strip residents of the park and accuse the local government of breaking several laws on public and environmental consulting in the process. In fact, the National Agency of the Environment officially confirmed that it has not received any application from the municipality for the proper environmental permit required by law.

The citizen-led challenge to the construction project has been met with hostility from local government officials, who labelled protesters as instruments of the opposition Democratic Party and “vandals”. The issue has received scant media coverage, despite the fact that police used force to disperse demonstrations and arrested 12 participants on February 21. 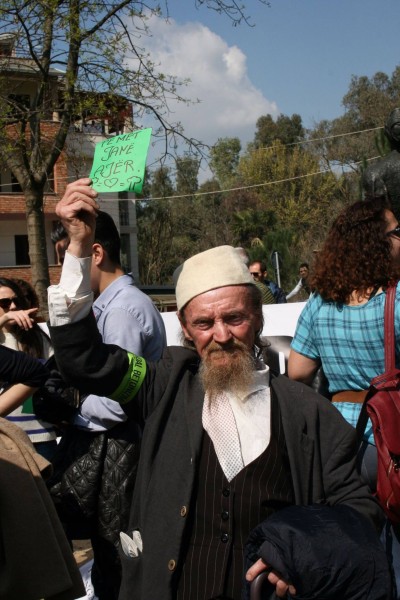 “The trees are air!” Photo by “Qytetaret Per Parkun” (Citizens for the Park), used with permission.

The need for transparency

After the protests erupted, the mayor's office began a push to publicize aspects of the project, but construction opponents don't think it's enough. For example, the project plan itself has not been published, despite requests from the movements “Per Publiken” (For Public) and “Qytetaret Per Parkun” (Citizens for the Park).

Veliaj invited the protesters and other civil society activists to attend public hearings, asking them to monitor the process and see for themselves that no tree would be cut down, but they refused as long as the project plan wasn't public, and while the controversial work was already underway.

On March 16, protesters went to check on the park after seeing large concrete trucks enter the area. They say they discovered channels filled with gravel and concrete as well as stumps of cut trees within the park, the opposite of what the mayor's promises.

Citizens escalated their protests in response. That night, they began a permanent sit-in protest, occupying the area.

The following night, protesters said the owners of Kassel ltd, one of the contracted companies, threatened and kicked them, and police did not intervene. A video (with English subtitles) purports to show the assault:

On March 19, activists organized another protest, including a march from the Tirana City Hall to Tirana Lake Park. 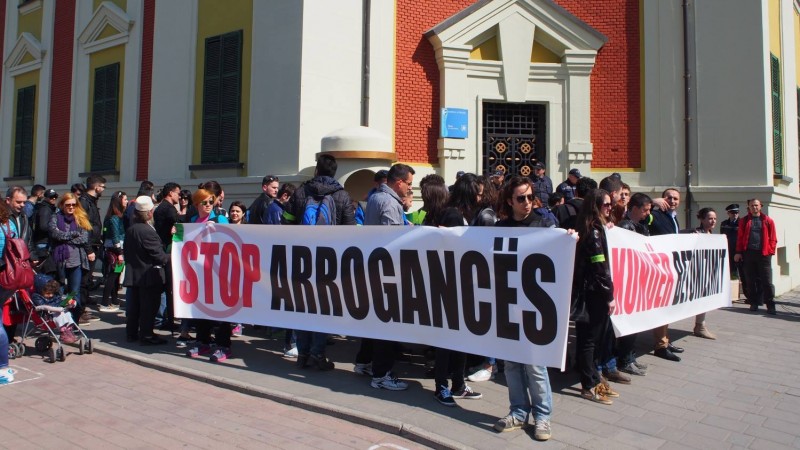 “Stop the arrogance! Against paving with concrete!” Photo by “Qytetaret Per Parkun” (Citizens for the Park), used with permission.

Citizens showed up in the hundreds, though there appeared to be more police presence than protesters. When participants arrived at the park, police prevented them from entering the fenced area. 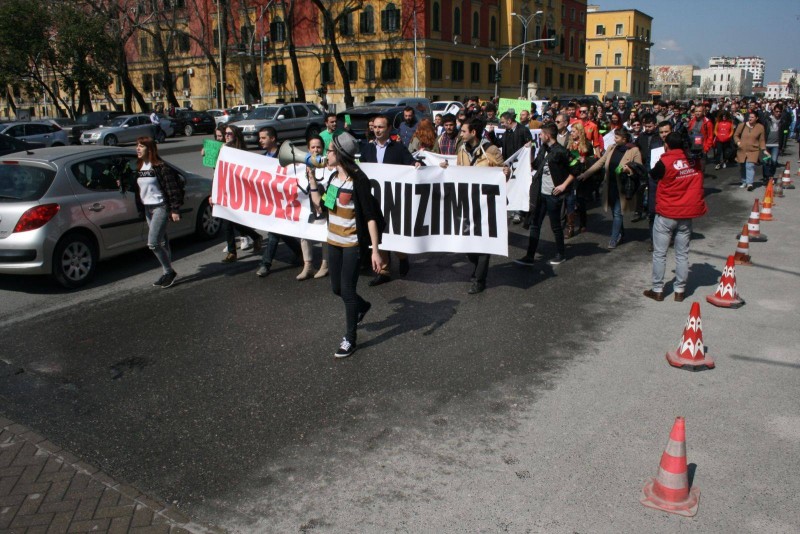 “Against paving with concrete!” Photo by “Qytetaret Per Parkun” (Citizens for the Park), used with permission.

Some protesters attempted to block the cement mixer trucks from entering the park, but police posted to guard the designated area have frustrated their efforts. Activists put out the call on social media to take “Aksion anti beton” (Action against concrete), while the the police denied access to media that tried to record the events (as seen in the video below):

The anti-construction movements have also tried legal action to stop the play area project. They filed a legal complaint against the municipality of Tirana, accusing them of breaking the law, but have received no answer from the general prosecutors office so far. They are now preparing to sue the municipality in the administrative court for procedural infringement. 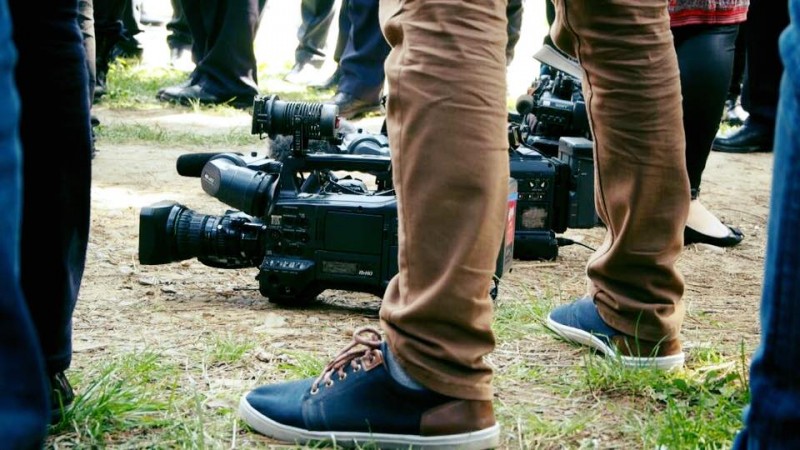 Media boycott: during the protest media present at the scene put their cameras down. Photo by “Qytetaret Per Parkun” (Citizens for the Park), used with permission.

Activists’ latest move was to send an open letter to the European Union (EU) Delegation in Tirana. As a candidate for EU membership, Albania is is monitored by certain EU bodies. And according to a 2015 survey by Albanian think tank IDM, Albanians have more faith in the EU institutions than their national ones because of widespread corruption. The letter lists some of the citizens’ grievances:

It is disconcerting that project has already started being implemented by the Tirana Municipality – in contravention to procedural standards and safeguards in place. In particular, the project has been initiated despite the lacking pertinent construction, environmental and archaeological permits. Furthermore, the project has not been subjected to construction supervision, which is to be carried out by a third party. The project has been given a start notwithstanding the fact that there has been no approval of a Master Plan of the Lake Park. Most importantly, the project was initiated without due informing and consulting of the public and stakeholders: the project has never been published and the public has not been made available neither a detailed project as a whole or even in part as a simple outline.

In light of the unfolding situation, we would like to kindly draw your attention to the fact that the voice and perspective raised by numerous civic movements has met with outright arrogance by the Tirana Municipality authorities, despite the fact that these very authorities have infringed standards and obligations from the legislative and regulatory framework in place […]

Another concern of the protesters, which is noted in the letter, is Albanian environmental NGOs, which have refrained from taking legal action, though several issued a joint declaration against the project and posted it to one of their websites. Protesters say their timidity is due to their partial dependency on government funds as well as fear of intimidation. 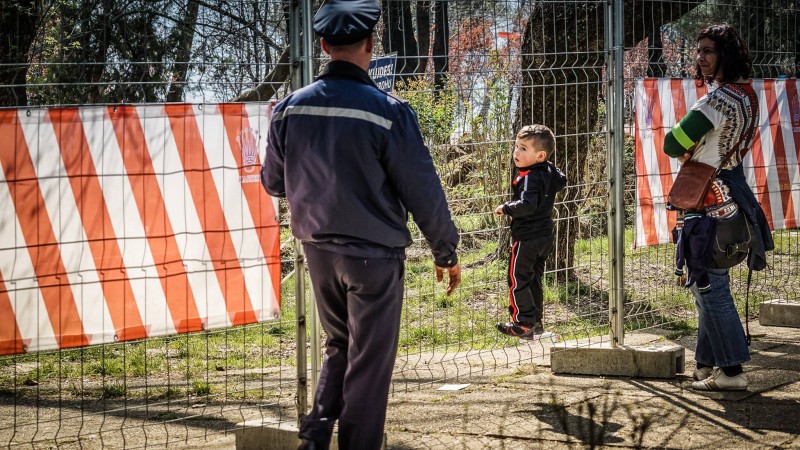 March 19 protest in Tirana. Photo by “Qytetaret Per Parkun” (Citizens for the Park), used with permission.