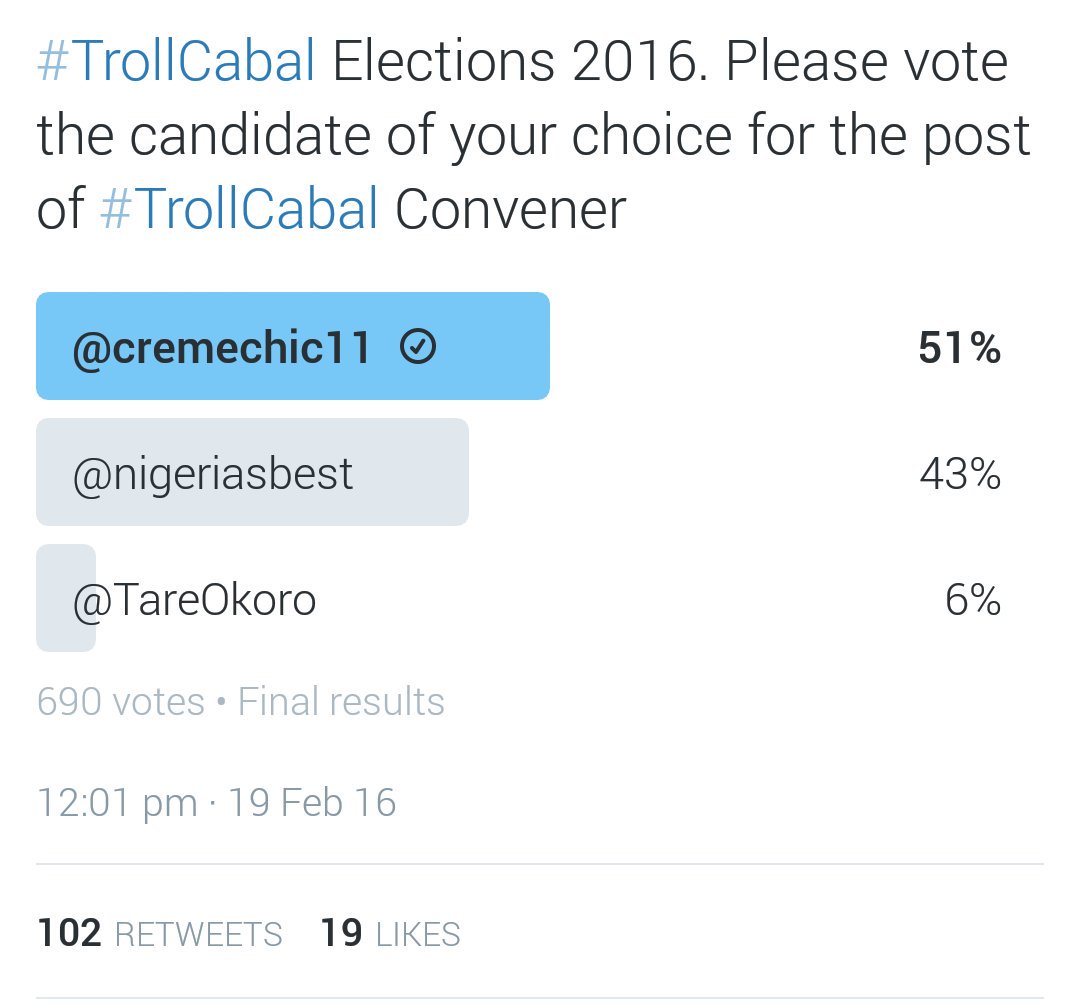 A screeshot of an announcement for #TrollCabal election.

Wikipedia defines a troll as a person who sows discord on the Internet by starting arguments or upsetting people, by posting inflammatory, extraneous, or off-topic messages in an online community.

However, a group of Nigerian netizens are redefining trolling by giving it a fun and humorous twist using the hashtag #TrollCabal. We spoke with Nwachukwu Egbunike, a Global Voices author, who is part of the initiative.

Ndesanjo Macha (NM): Please tell us briefly what #TrollCabal is and what it stands for?

Nwachukwu Egbunike (NE): #TrollCabal is essentially a group of Nigerian Twitter users who are bent on having fun using the divisive nature of conversations around them. Essentially, the #TrollCabal makes mockery of the drama that characterizes Nigeria political space. We also mimic the Twitter Overlords and their conversations. This takes off the heat, which often borders on pure hate, from the Twitter’s space. In addition, it provides a counter narrative that is non-violent and at the same time humorous.

We are NOT the usual type of trolls, who have an inherent intent to malign or to unnecessarily hurt anyone. #TrollCabal are happy and harmless people!

NM: How did the idea come about?

NE: To give a full response to this question, then a description of the disruptive and often bitter clime of TwitterNG is appropriate. At the beginning, most tweeps were more interested in networking using the social media platforms. However, over the years, the influence of Twitter as a networked public sphere (apologies to Yochai Benkler) became a part of Nigeria’s public space. In other words, the once hidden and silent voices had a platform for collective action. One only has to peer into some hashtags that have resonated globally from Nigeria, like #OccupyNigeria or #BringBackOurGirls to validate this assertion. Whether or not these trends achieved their aim is a story for another day.

Nonetheless, it became obvious to Nigerian politicians that social media, especially Twitter, is a must for anyone that wishes to sell their candidacy or cultivate public goodwill for their government. That obviously is a refreshing perspective, for the once distant ‘big men/women’ of Nigerian politics. But the resultant effect of this was that Twitter soon morphed from being simply a networked public square to a theater of political battle.

Trenches soon emerged with very influential Twitter users – called overlords – who decided the agenda of these partisan discourses and got their followers to tweet accordingly. As we stated in this study: “Overlords are very powerful persons in the Nigeria Twitter hierarchy and they exercise considerable control and influence over their followers (voltrons). They are powerful persons whose voices must not only be heard but also feared.” Soon the once ambient atmosphere of Twitter Nigeria was replaced with a combative space characterized by a bitter allegiance to either of the two main political parties.

This was the background that led to the birth of #TrollCabal.

NM: Who are the leaders behind it?

NE: Ikenna Okonkwo (@failedrift) – a blogger, geologist and academic – is the brain behind #TrollCabal. Ikenna was the pioneer Convener (leader) of the group. I took over from him and just recently passed the baton to the third Convener and the first female to lead the #TrollCabal, Irene Nwaukwa (@cremechic11) who resides in Nairobi, Kenya.

NM: You had a Twitter election recently. What was the purpose of the election and how did it go?

NE: Lol… just lol! The purpose of the election was simply to have fun. Although we are almost one year into the mandate of the current government of Nigeria, the Twitter Overlords have maintained their bickering as though we were still in the election season. The #TrollCabal election was just another way to cool an already inflamed Twitter public sphere.

Elections for the leadership of #TrollCabal was held on February 19, 2016. The contestants: Irene Nwaukwa, Gege (@nigeriabest), who works in the United Kingdom, and Tare Okoro (@tareokoro). The electoral umpire was Kwame Adadevoh (@kwameadadevoh). I think these contestants, the electoral chief and generally Nigerian Twitter users deserve praise for the conversations that were generated during the elections. For over 72 hours before the elections, many tweeps campaigned for their candidates and even after the elections the ‘bants’ continued.

Frankly speaking I will say that #TrollCabal elections received wide acceptance and popularity because of its non-confessional and non-partisan stance. Also the fun was that the same lingo that was deployed during Nigerian general elections was also adopted by the supporters of each candidate. For instance, tweets like “a major candidate has been arrested, ballot boxes have been snatched or reports of an attempt to rig the elections, etc” were basically what we experienced during the Nigerian general elections.

NM: How is the hashtag being received in Nigeria?

NE: As I said earlier it was warmly received – a far cry of the battle songs that seem to have now possessed Nigeria’s Twitter-mediated public space. Also some tweeps saw in the election a capacity for collective action to promote good governance that is non-partisan, non-confessional and has no ethnic label. These factors, unfortunately, have for long saddled political participation in the country.

NM: What is the next big thing for #TrollCabal?

NE: I think my successor, Irene, will be in a better position to answer this question. Nonetheless, I am certain that one has not heard the last from the #TrollCabal!