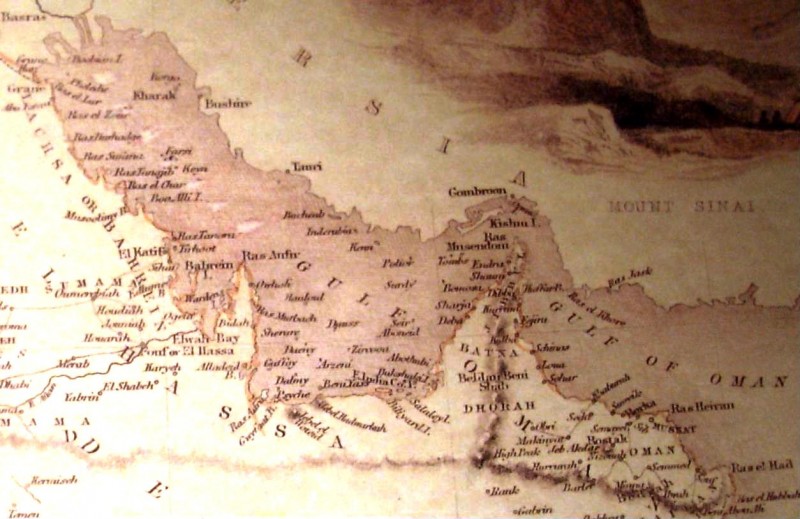 Bahrain has long been a friend to its Western allies. This friendship was celebrated at the Bahrain International Air Show (BIAS) on January 21, with a flypast of the BAE Systems Typhoon Jets that the UK is so desperate to sell to all the Gulf dictatorships.

The BIAS was the first event in a year of celebrations touting the benefits of Bahrain’s relationship with the UK, which dates back 200 years. Interestingly, the ‘build up’ to the 200th anniversary had been marked since the ‘GREAT British Week’ in 2013. It appears that both governments are keen to drown out criticism of their relationship by excessively emphasising how wonderful the relationship has been for both countries.

Choosing to mark the 200th anniversary of Bahraini-British relations is somewhat problematic, however, as in its early history the relationship doesn’t read so much as ‘friendship’, as a colonial relationship involving coercion, treachery, piracy and slave-trading.

The Bahraini ruling family, the Al-Khalifa, come from the Bani Utbah tribe, who were part of a confederation in Kuwait before breaking away to inhabit the Arabian coast near Bahrain at Zubara (modern day Qatar) in the 18th century. Here, they came into conflict with neighbouring tribes, including the rulers of Muscat, Abu Dhabi and the Al-Saud family in the Arabian interior.

Britain, meanwhile, was expanding its trading empire, particularly in India, and the British government in Bombay was becoming concerned about intertribal warfare and piracy of the Persian Gulf. At the beginning of the 19th century, the British Resident, the senior British officer in the Gulf, was based on the Persian coast at Bushehr. In 1805, the Al-Khalifa sheikhs  approached the British Resident asking for protection against the Al-Saud family and their fanatical Wahhabi followers, who were pressuring them to go on ‘a piratical cruise to India’. The Wahhabis had no navy, and wanted to branch out into piracy of trade ships from India to the Gulf.

According to a history of the Bani Utbah tribe compiled by British officers in the Persian Gulf later in the 19th century, the British wished to check ‘this new and pernicious system, arising out of the avarice and fanaticism of a desperate tribe in the centre of the Nujd’. However, the Bombay government, unsure of the Persian reaction to British involvement with Gulf Arab tribes, declined to offer them protection.

In 1810, the Wahhabis imposed a governor on Bahrain and the neighbouring Arab coast to whom the Al-Khalifa were obliged to pay tribute. In 1811-12, the Ottomans sent an Egyptian army under Muhammad Ali Pasha’s son to retake Arabia, and the Utbah were able to throw off the Wahhabi governor and start cooperating with the Imam of Muscat.

Although the ‘Records of Bahrain’ collected by the British colonial office is unclear on the matter, it seems that Muscat may have attempted to make the Al-Khalifa their subjects and rejecting this, the Al-Khalifa tried to play both sides by approaching the Wahhabis. The Resident at Bushehr, Lieutenant William Bruce, arrived in Bahrain on 19 July, 1816 to find Sheikh Abdullah Al-Khalifa concerned that the British were going to support an attack by Muscat on Bahrain, as the Imam of Muscat had warned him. Bruce reassured the Sheikh that this was untrue, and to emphasise the point, suggested that he could ‘draw out a few articles of agreement’, believing that the government of Bombay wouldn’t mind. The government of Bombay did mind, however, and rejected Bruce's unauthorised agreement, choosing to remain neutral towards Bahrain for the time being. Whatever the case, this informal agreement was not thought significant enough to bother keeping.

This was probably a wise move on the part of the Bombay government, as the Al-Khalifa, after promising Bruce that they would refrain from assisting pirates in the Gulf, proceeded to assist a neighbouring tribe, the Jawasim, in conducting a campaign of piracy and selling their stolen goods in Bahrain. ‘It was impossible under these circumstances to look on Bahrain in any other light than that of a piratical port’, wrote the Persian Gulf's British Assistant Resident in his history of the Utub sheikhs.

By 1819, the government of British India had had enough of the Gulf tribes’ infighting and piracy. Captain Lock arrived with six ships to investigate a report of Indian women being sold as slaves in a Bahraini bazaar. The sheikh convinced Lock that the story was not true and agreed to prohibit the sale of ‘captured British property’, an agreement to which the sheikh ‘did not pay the slightest attention’.

After being disregarded once again, the British sent more ships to the Gulf under Sir W.G. Keir and destroyed the Jawasim pirate fleet, capturing their base at Ras al-Khaimah, now one of the seven UAE Emirates.

An excerpt from History of the Indian Navy 1613-1863 Volume I, by Charles Rathbone Low.

The Bahraini Sheikh then handed over to the British all the pirate ships which had been docked in his harbour. However, this did not entirely eradicate piracy, and tribal squabbles continued between the Gulf sheikhs as the Al-Khalifa continued to fight against becoming subjects of either Muscat or the Wahhabis.

It is hard to say that the 1816 agreement constituted a treaty of friendship, as it was really a promise that the British navy in the Gulf would remain neutral in a conflict between Bahrain and Muscat.

It is also understandable that the Bahraini and British governments would not want to celebrate an anniversary in 2020 when the first official treaty was signed, partly because it is an election year in the UK, but maybe also because it represents the anniversary of the British forcing the Gulf sheikhs to stop their piracy and slave trading. It also seems that the Bahraini government is trying to enhance its legitimacy by implying that Bahrain was always really independent from Britain, who were simply the friends and benefactors of the Alkhalifa monarchs, not their colonial masters.

It’s hard to call any of these occasions the beginning of a ‘friendship’ between Britain and Bahrain. The reality is not that it is a relationship of mutual friendship but rather one of hard-nosed political cynicism.

Perhaps that is what the euphemism ‘friendship’ really means. The patron-client relationship between Britain and Bahrain has endured for 200 years and shows little sign of ending. It is a relationship of convenience, for reasons of power and commerce, and perhaps it cannot be one that should be expected to work in the interests of ordinary citizens.