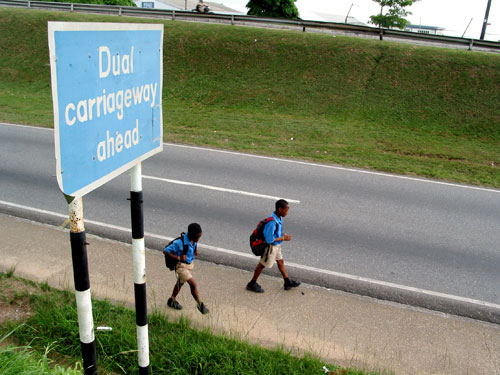 A secondary school teacher has become the focus of frustrations with Trinidad and Tobago's education system after audio of her disparaging gay people and atheists and accusing a student of drug dealing was publicly shared [2] on Facebook.

After the recording of what is being described as “a rant” [3]went viral, the school referred [3] the matter to the Ministry of Education. [4] Thus far, no definitive action has been taken against Nandlal, although it appears that she has not reported for duty since the incident.

Social media, meanwhile, went ballistic. Structured on a system [5] that focuses on passing a placement exam [6] in order to enter secondary school, education in Trinidad and Tobago is grappling [7] with poor academic performance, teacher absenteeism, violence and lack of discipline.

For many, the recording seemed to exemplify some of these issues. Posting on the comments thread of the Facebook recording, Jason Dookeran said [8]:

Others posted an image of the Trinidad and Tobago Unified Teachers Association (TTUTA) [9] guidelines on teacher responsibilities: 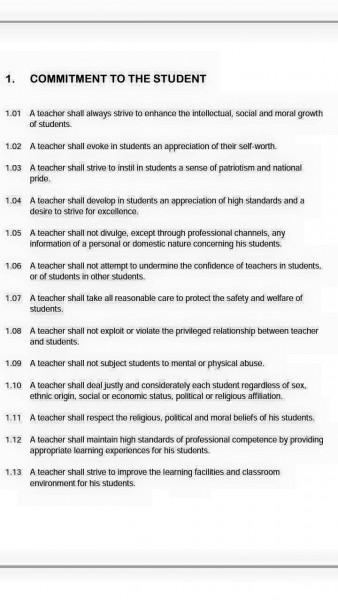 It seems a number of her students do not feel the same way — they soon launched an online petition [10] supporting her that garnered just over 1,000 signatures in two days [11]. In it, the boys called her “sincere”, “generous” and “loving” and said the impressions of her on social media and in the news were “misleading”:

To many social media users [12], this display of support — from the school's students and from other netizens — has been one of the most astounding [13] aspects of the situation. On one comments thread [10], nvllivs_in_verba countered many of the points made in the petition statement:

In a telephone interview, teacher and Facebook user Patrice Cox-Neaves — who emphatically stated that she felt the teacher needed to be removed from her post — noted two areas of concern. One had to do with the fact that Naparima College [14] is a school which falls under the purview of the Presbyterian School Board, which so far, has not made a statement on the issue.

In the cases of religious denominational schools like Naparima College, while the country's Teaching Commission [15] may interview prospective teachers, the relevant denominational boards also conduct their own interviews — and teachers are only appointed if these boards approve the candidates. In this case, Cox-Neaves feared that the board's silence may be consent.

Angelo Bissessarsingh, a past pupil of the school, wrote [16] in a public Facebook post that Naparima College wasn't always a “haven to bigotry and intolerance”:

Finally, in yesterday's Sunday Guardian, columnist Kevin Baldeosingh wrote [19] that “the student at the centre of this issue sent me an email on Wednesday to give his side of the story”: