Nigerian Police Beat Up Yomi Olomofe, Who Was Assaulted Last Year Over His Corruption Reporting 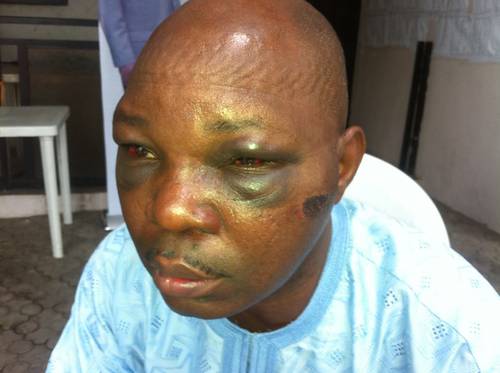 Yomi Olomofe, Nigerian journalist that was physically assaulted by the police. Photo by SaharaReporters Media. Used with permission.

Yomi Olomofe, a Nigerian journalist, was brutally assaulted and detained on March 17 by the Nigerian police. According to the Committee to Protect Journalists (CPJ), police moved against Olomofe after men who he had said beat him up last June accused the journalist of assault and attempting to extort money from them.

On June 25, 2015, Olomofe, who publishes the monthly community magazine Prime Magazine, and McDominic Nkpemenyie, a correspondent with the state-funded Tide Newspaper, were investigating allegations that customs officers at Seme, on Nigeria's border with Benin, were complicit in smuggling, when more than 15 men attacked the two journalists, Olomofe told CPJ. The men hit Olomofe on his face and body with their fists and sticks until he lost consciousness, the publisher and witnesses told CPJ days later,after Olomofe regained consciousness.

Peter Nkanga, CPJ's West Africa representative, commented: “Arresting magazine publisher Yomi Olomofe for beating the men he says beat him to a pulp is nothing short of obscene. Rather than blaming the messenger, police should energetically pursue those responsible for the crime.”

This “mockery of justice” was decried by Sue Valentine of Open Society Foundation (which is a Global Voices sponsor):

First he is beaten up, then lays charges against his assailants, yet HE is the one arrested. A mockery of justice. https://t.co/3rW5DZTWCM

Meanwhile, the Nigerian Union of Journalists (NUJ) has petitioned the Inspector General of Police about Olomofo's continued detention. NUJ stated that “the inability of the Police to bring the perpetrators of attempted murder to justice for nine months was a monumental scandal”:

The NUJ and Olomofe are seeking for a public apology, assurance of Olomofe’s safety, N100 million compensation for breach of fundamental rights. Olomofe has been admitted to the hospital for urgent medical attention due to the shock of his harassment by the police. He has been told by his doctors that he has relapsed into a state of depression with his blood pressure alarmingly high

The NUJ earlier had filed a lawsuit seeking damages of 500 million Nigerian naira (about 2.5 million US dollars) against the Nigerian Customs Service over Olomofe's assault last June.

Nonetheless, in a question-and-answer session with the Guardian, Olomofe said he was not deterred by the violence attempting to gag him in late February:

I am a Nigerian. A proud Nigerian. I believe our country shall get it right. I believe impunity is on its way out of the psyche of top government officials. I believe we will conquer corruption. I appreciate the global demonstration of support I got in my trying moments. Peace to the world!