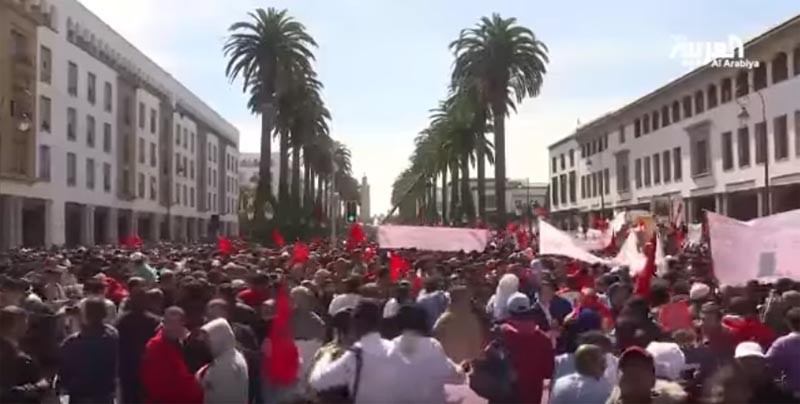 Screenshot of an Al Arabiya video report on the protests in Morocco.

For more than 40 years, the strained relationship between the kingdom of Morocco and the people living in West Sahara have sustained a simmering conflict over the region's governance. Earlier this month, tensions were re-inflamed when UN Secretary General Ban Ki-Moon flew to south Algeria, where he visited refugee camps populated by indigenous Sahrawis.

On Sunday, March 13, tens of thousands of Moroccans took to streets in a rare display of popular anger, protesting Ban Ki-Moon's remarks about the disputed land. The Moroccan government accuses Ban of violating the United Nations’ neutrality for describing Western Sahara as “occupied” land. A spokesperson for Morocco's Foreign Ministry told reporters that the UN official had “attacked” the nation's “feelings.”

Morocco claims Western Sahara, a former Spanish colony, as its territory, while Sahrawis led by the indigenous Polisario Front want independence for what they call the Saharan Arab Democratic Republic. The two fought a bloody war over the land from 1975 until 1991, when the UN managed to broker a a ceasefire agreement.

As a result of the conflict, thousands of Sahrawis were deported and live in refugee camps in Tindouf in neighboring Algeria until this day. An estimated 165,000 Sahrawi refugees reside in the camps, according to the UNHCR. Opportunities for self-reliance are scarce, and most rely on humanitarian assistance.

The people of Western Sahara, which has a population estimated to be 570,866, want a referendum to determine their independence as promised in the ceasefire, while Morocco rejects the idea.

Morocco believes the integrity of their country is at stake; Western Sahara believes independence is rightfully theirs. Passions surrounding the issue, unsurprisingly, often run high.

‘We will not give up on a single grain of sand’

Upset with the UN secretary general, Idriss Lashkar, a prominent member of the Moroccan parliament, called on people to take part in demonstrations across the country.

Several political leaders endorsed the marches that began in Bab Chala, in downtown Rabat, encouraging young people to attend. On the bustling city streets, protesters referred to the marches as “Milyoneya”—an Arabic term for a protest by millions of people. Moroccans chanted slogans and carried banners to boost the zealous national atmosphere. Leaders also directed harsh criticism at Ban Ki-Moon, asserting the unity of the people and Moroccan sovereignty.

On social media, some Moroccans directed their frustration at Algeria, which backs the Polisario Front, as well as the rest of the world for what they perceive as taking Western Sahara's side.

In a Facebook post, Hajar Maky posted a photograph of a group of Moroccans wearing the country's flag on their backs. She stressed the importance of unity:

We're not the best nation in the world when it comes to tolerance, respect and acceptance of the other, etc. We don't even have stances towards issues that take place in many of the world's states, neither do we know much about them, with the exception of Palestine. Also, most of the world's states have no knowledge about our case, and they take stances on it as a result of their ignorance of facts and reality. Our neighboring country, Algeria — may God protect its people from all evil — tries to maintain its diplomatic endeavors by affording the logistics for leaders of the Polisario Front, Sahrawi armed movement, in order to promote a historic lie.

Take it or leave it, whether Algeria and its allies want it or not, the Sahara is Moroccan

A popular Arab Moroccan singer, Saad lmjarrad, posted a photograph on his Facebook page that read “the Sahara is Moroccan” and supported the protests, saying:

Morocco exists in its desert and the dessert exists in its Morocco. We swear to God, we will not give up on a single grain of sand in our homeland. We pray to the great God to preserve our country from disputes, and bestow safety and tranquility upon our beloved country, from Tangier to Queira

Fatma Ezzahraa, an active Moroccan Twitter user, posted tweets and photographs in solidarity with the demonstrations:

Oh, my country. Oh, people of my homeland. Today's marches in Rabat. #MoroccanAndProud

Ban Ki-Moon was reported to be angry at the protests. Morocco, in turn, announced it would cut support for the UN's peacekeeping mission in Western Sahara.

Nevertheless, the UN secretary general's visit to the refugee camps seemed to inject some hope into Sahrawis's struggle for sovereignty.

In a reaction to the protests in Morocco, Sahrawis expressed their indignation against what they called the “Moroccan occupation”. Malainin Lakhal tweeted:

Lakhal is a human rights activist who says he was subjected to enforced disappearance in Moroccan prisons. He considers himself a fighter for the independence of Western Sahara.

Abdullah Saleh posted a photograph on Twitter showing a gathering in front of the Spanish Ministry of Foreign Affairs in Spain. The group members were holding flags of the Sahrawi Arab Democratic Republic, demanding the liberation of Western Sahara:

The international solidarity campaign for Sahrawi political detainees in front of the Spanish ministry of foreign affairs.

Join forces to defeat the invaders

Mille Neumann posted a photograph with activists from Afrika Kontakt, a Danish-based solidarity movement that collaborates with African movements, expressing their support for the people of Western Sahara and calling for a secession referendum to be held:

Ghaly Ahmed personalized his homeland describing the occupation as a person bleeding. He said:

When will you be relieved from your prolonged pain? Oh, my homeland. Peace be upon you

Meanwhile, Sahrawis are organizing a peaceful demonstration for March 19 that demands the release of political detainees in Moroccan prisons.