A List of Hope: Is Electoral Politics All That’s Left for the Iranian Opposition? 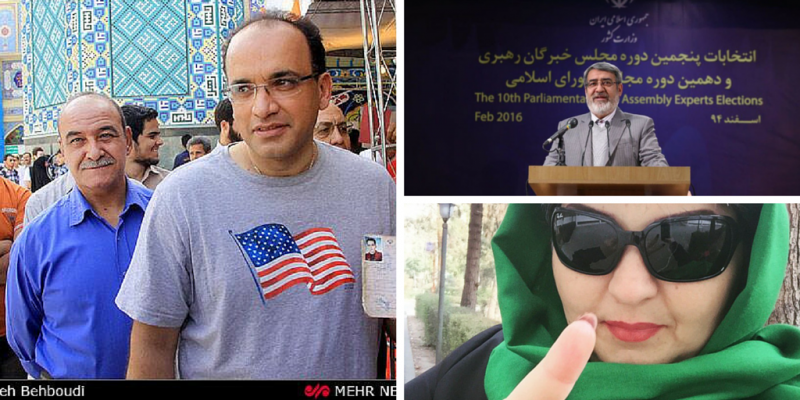 To vote or not to vote. That was one of the primary questions debated in the run-up to the recent elections in Iran. On February 26, Iranians went to the polls to elect members of both the parliament and what is known as the Assembly of Experts, a body of clerics who are assigned the selection and overseeing of the Supreme Leader.

Boycotting the vote was discussed for a number of reasons that are discussed in this post. One prominent reason for boycotting was because of the lack of approved reformist candidates. There were not enough reformist candidates approved for a majority victory in either the parliament or Assembly of Experts. After a public outcry, a number of reformists were approved. Most of them were inexperienced in politics and names that were not familiar to the Iranian electorate.

The election was seen as important for a number of reasons. It is believed that a win for reformists would solidify the position of the current centrist President Hassan Rouhani. The win would show Iranian elites that the population supported the opening to the west that Rouhani's administration fought for. It was under his administration that the nuclear deal was signed.

Many in Iran have high expectations that the economy will flourish as a result of the nuclear agreement. The United States has promised to lift many of the economic sanctions it placed on Iran and companies doing business with Iran. The sanctions placed by the United Nations would also be lifted. Many in Iran voted for job creation. Economic concerns are, perhaps, the single most pressing issue for the Iranian citizenry.

Reformists managed to create a list of candidates that were seen as somewhat supportive of political reform. Dar Sahn (The Floor), a project monitoring both the parliament and Assembly, wrote:

At the last minute, Reformists announced a list of candidates. That list included all the Reformists running, plus members of other parties that might be more receptive to Reformist policies. Then again they might not. The fact is, the cobbled together list provided many in Iran with an opportunity to express themselves through voting. As one Iran analyst told Dar Sahn, “Voting is a way for people to show that the social movement in Iran is still alive.”

The pro-Rouhani reformist list of candidates was called the “list of hope.” Hope was certainly not missing in the images we saw coming from polling stations.

A day at the polls 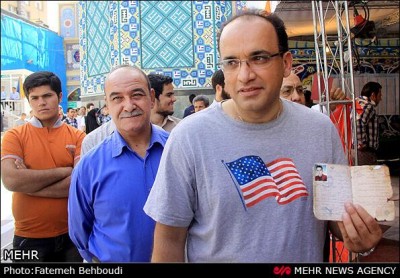 Man in a t-shirt featuring the US flag votes in Iran. From MEHR News

In the tweet below @DorsaJalalian shares the image of voters dancing at a polling station while others wait to cast their votes. Dorsa Jalalian tweeted:

My favorite election photo so far: Kurdish dancing at a polling station

@hooshmandk remarked on a funny scene in the station where former President Khatami voted. A man in the crowd managed to take a selfie of himself with the former president:

“That guy is great! :))) He's scoring a selfie [with Khatami] in all this hubub

And this tweet by journalist Mohammad Hasan Najmi talked about the high turnout:

Great voter turn-out at Hoseyniye Ershad: The queue is approximately 400 meters with the density of 2-3 people in width.

Many, especially in western media, celebrated the results of the elections. About 80 seats were won for the moderate-reformist bloc. There were 64 for the hardliners and 73 for independents. Sixty-nine seats remain to be filled in runoff elections in early April.

Journalist Negar Mortazavi warned that those so-called reformists weren't the top of the reformist bloc. The list was a compromise that included moderate conservatives and even some moderate hardliners. This was because many of the more prominent reformists had been disqualified.

To vote or not to vote

Some believe that the election will not change the status quo and, worse, legitimizes the government of the Islamic Republic. Columbia Professor Hamid Dabashi, writing in Al Jazeera, supported a boycott. He wrote:

Those who did not advocate voting – and with all due respect to those who did I was among them – argued that this was a travesty of an election: It was already rigged from the get-go; it would cast an inevitable vote of confidence in the ruling apparatus of the Islamic Republic; it would make a mockery of those who sacrificed their lives asking the now historic question “where is my vote?” back in 2009; and Ayatollah Khamenei and the ruling elite of the Islamic Republic would use the vote to prove that he was right all along to call the Green Movement a seditious seed planted by foreigners.

The rich Iranian social media scene responded with a mixture of opinions. On Twitter some explained why they chose not to vote. Here is a sample of those opinions.

@iomid1333 wrote that the people in Arak, the capital of Iran's Markazi Province, were sleeping rather than voting:

The people of Arak are asleep. Nobody is on the streets. People are seeing right through [the system]'s lies. #IWillNotVote #Parlaiment #Assembly  #Elections

Nevaan wondered how people can vote for a government that suppresses them:

@P00R1A doubted that the elections can be fair:

I think there's bigger chance of an asteroid hitting the earth tomorrow than [Ayatollah Ahmad] Jannati losing |: [Implying that the system won't allow a prominent person such as Jannati lose]

Saman Salari wondered how he can trust reformists:

‏I want to know how can I trust the reformists? Some of them are wolves in sheep's clothes. I still have not decided to vote #Elections #Parliament

Ink on the fingers

In many images circulated online, voters showed off their index fingers covered in ink. This marks their participation in the election so that they cannot vote more than once. Many wore green head scarves or hand bands.

Wearing green marks the demonstrations that followed the flawed 2009 presidential elections in Iran. What became known as the Green Movement reached its peak when about 3 million people took to the street to protest the quick announcement of a landslide victory by Mahmoud Ahmadinejad. The protester’s slogan was simply “Where is my vote?” The Iranian government responded with mass arrests and even the killing of some protesters.

‎@Halehhyd donned a green headscarf, a symbol of the 2009 Green Movement:

I put on my green scarf, and went down to vote.

The participation of many activists and supporters of the Green Movement may indicate two things.

First, there may be renewed hope in the electoral process and its ability to bring change. After all, the 2013 presidential election brought Rouhani, who brought about the nuclear deal, promising an era of reduced tension with the West and more economic prosperity. Such promises constituted the platform the “list of hope.” They were used in their electoral campaigning.

Second, their participation is also indicative of the adaptability and pragmatism of these dissidents and of Iranian voters in general. They chose to work from within the system as opposed to outside of it. They seem to be taking a step-by-step approach to change.

Some observers say that Iranians are not ready for another massive protest movement like that of 2009. They believe the human loss is just too large. This is especially true for those looking at the aftermath of the “Arab Spring.” Iranians, including those opposing the government, lean towards more gradual change.

This approach isn’t without its cynics. Some believe that change is just too slow and electoral politics further entrenches the political system. They state that it even involves those supposed reformists (who some see as opportunists) in the repressive measures of the government.

Go vote so that things gradually improve. That's why in comparison to 20 years ago we have fewer [candidate] disqualifications, fewer executions, fewer political prisoners, and less poverty!

But even Dabashi, who favored a boycott, wrote that the healthy debate around voting or not voting demonstrates a fresh political culture which the Green Movement shaped. Even if the Green Movement did not attain its goals directly, political culture in Iran is changing. It's a culture characterized by a social intelligence which “takes what the theocratic regime throws its way, breathes new life into it, and creates their own leaders.”

Ladies who are going to vote! Remember last June, when your campaign to allow women to enter volleyball stadiums?
How successful was that?!

Both for and against voting are understandable. Let's not accuse each other of immorality and lacking political intuition. We have to be united.

To read more tweets that reflect the debate around the elections, and why Iranians voted or did not vote, check out more translations on Bridge done by Farhad Souzanchi and Arta Shams from ASL19.